The Eurovision song contest has a big following in Australia, judging by the fact that we are allowed to participate in the competition where European nations battle it out for best pop song.

Personally I don’t think there has been a decent winner since 1974 when ABBA won it for Sweden with their song “Waterloo”, but maybe I just don’t appreciate cheesy, over-the-top Euro pop music! But the contest does foster a feeling of goodwill, peace and connectedness between European countries where, in the past and presently, relations have not been so good. A prime example being Russia’s current invasion of Ukraine.

So this year we saw Russia and Belarus expelled* from the competition and the emotional favourite to win before a note had even been played was Ukraine.

If, like me, you woke up to watch it at 5am last Sunday you would have seen the Ukraine performers carried to victory on a wave of popular votes. They won for their song Stefania, which was like a Ukrainian rap song with a catchy flute chorus. Once that tune got inside your head, you could not get it out! An earworm I think they call it. 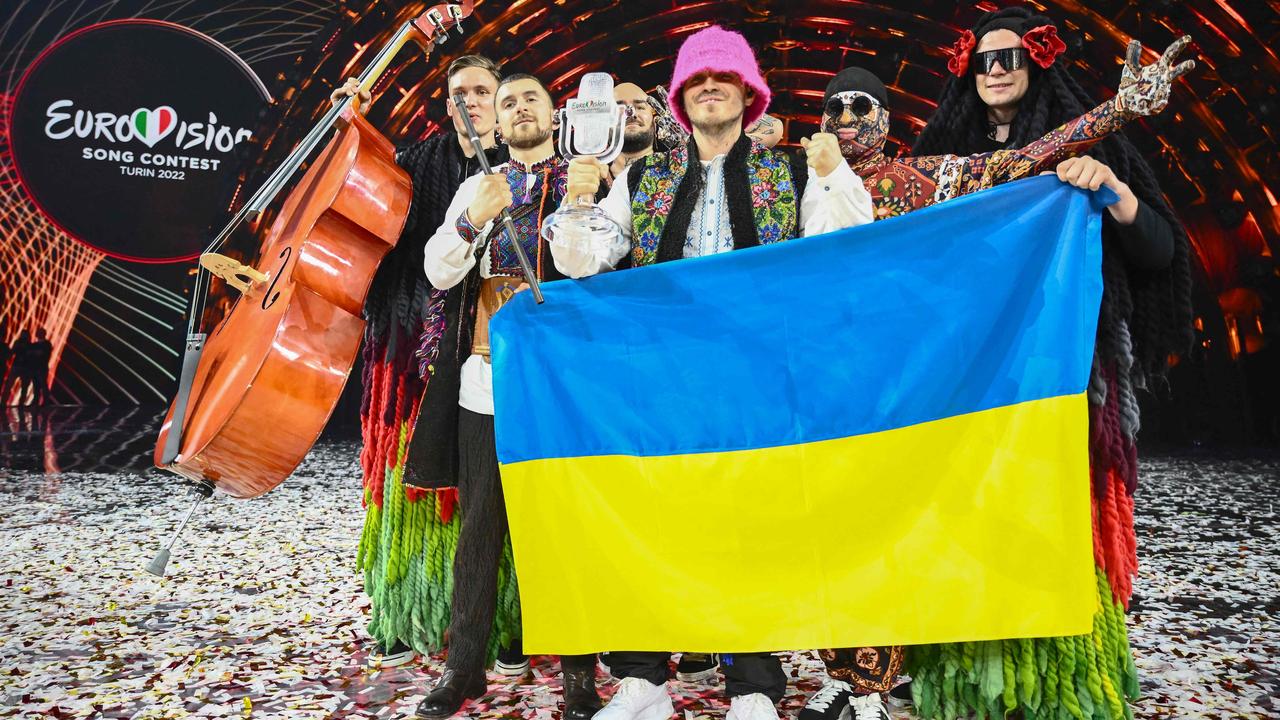 The Ukraine performers pose with their national flag and 2022 Eurovision trophy after taking out the song contest with their song Stefania. Picture: AFP

I thought the event was a good topic for a cartoon based on the fact that Ukraine has suffered greatly due to Russia’s invasion.

Rather than draw the actual performers and their song, I thought I would create my political version of a Ukrainian entry in the song contest.

I thought the best frontman for a band performing at my political interpretation* of Eurovision would have to be Ukrainian President Volodomyr Zelensky. A former actor and comedian, he was highly underrated* by the world when he unexpectedly won an election to lead his country and then face up to the military might of Russia.

He has performed beyond expectation and is one of the main reasons Ukraine has defended so well and pushed back the superior Russian forces. A frontman if ever there was one! Eurovision is also famous for its over-the-top stage performances and costumes. I thought for Zelensky’s performance there should be lots of pyrotechnics* on stage, symbolic of the ferocity* of this unfortunate war.

I sketched him standing on one of the most visible symbols of the invasion: a destroyed Russian tank. He sings into a microphone, belting out his song in his familiar khaki green T-shirt. A Ukrainian serviceman walks past the wreckage of a Russian tank in the village of Skybyn, northeast of the capital city of Kyiv on May 2, 2022. Destroyed Russian tanks have become a common sight as Ukrainian forces fight the invasion. Picture: AFP

No Eurovision performance would be complete without the cheering crowd, so in the foreground I have drawn fans dancing and waving their arms in approval.

You might recognise someone in the crowd covering their ears, someone who bears an amazing resemblance to Russian leader Vladimir Putin. Not a fan of this performance obviously.

The final piece of this cartoon was the song. What song would President Zelensky be singing? What tune represents Ukraine’s struggle against the odds? A song that defines how they have defied* military predictions? A song that also capture’s the type of leader Zelensky is? I remembered his famous quote when he knocked back offers of help to flee the country: “I don’t need a ride, I need ammunition”.

For me there was only one song. Maybe a younger generation, like you students, can think of others. I’m sure you can, but for me, being a bit older than you, it was Frank Sinatra’s classic “My way”.

Zelensky certainly has done it his way, and the cartoon illustrates how his performance is worthy of being crowned winner of Eurovision 2022!

Are Putin and Xi on similar paths?