Wheat in a wheat field in Western Australia being harvested

Western Australia’s wheat fields have yielded* an ­unusual harvest of creatures, ­including a giant bilby and a rare turtle shaped from wheat stalks.

The residents of York, an hour’s drive east of Perth, are celebrating their region’s wheat harvest, much of which goes to Japan to make noodles.

The display of endangered animals on the streets during York’s ­annual* community festival were created by a Japanese artist of natural sculptures and a team of keen local helpers.

Wara art is a craft tradition celebrated across Japan each year, in which sheafs* of rice stalks are woven into fantastic shapes. 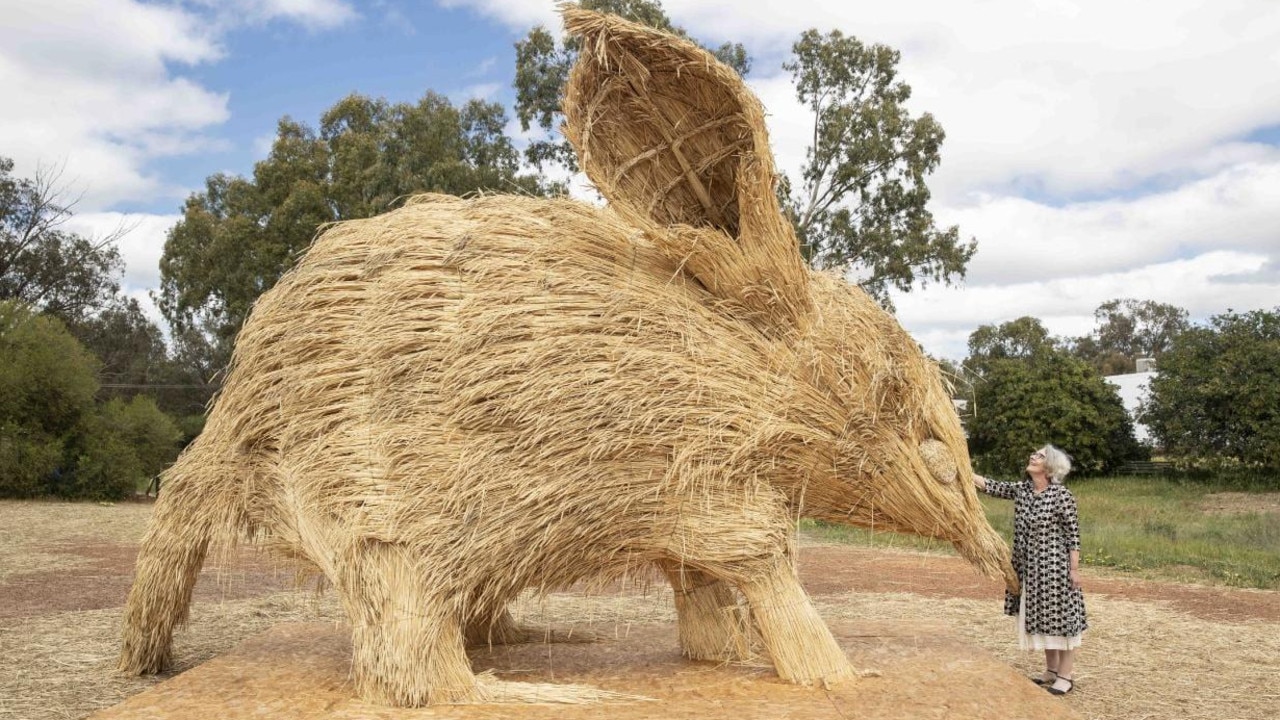 When she heard about Wara art, York Festival director Jenny Garroun decided to expand the town’s haybale sculpture challenge into a bigger event.

She invited Wara art sculptor Akira Moriya to York to oversee* the making of a bilby, turtle and frog using local wheat straw.

“I thought it would be amazing, and it would draw attention to the endangered status* of our native animals,’’ she said. Charlotte, 9, and friends check out the giant hay bilby on display at the York Festival. Picture: Matthew Poon

Western Australia’s Wheatbelt farmers provide as much as half of the high-quality wheat used in Japan to make certain types of noodles, including the white, salty noodles called udon.

Through history, Japan’s rice-weaving tradition was a way to use up rice stalks after harvest, for roofs, fertiliser, animal feed and tatami* matting. In modern times, these have been replaced by newer materials. Udon is a traditional style of white, salty Japanese noodle. Japanese noodle makers like West Australian wheat to make these and other types of noodles.

The Wara Art Festival in northern Japan, which ends later this month, invites art students to create super-sized ­gorillas, rhinos and even dinosaurs out of braided straw over a wooden frame.

York’s festival sculptures have timed neatly with the Japanese event.

Like the Japanese sculptures, the bilby, turtle and frog will remain on display until the end of this month, when all will then be reduced to piles of straw.

2. Extension
Which other animal would you like to see a Wara art sculpture of and why? Draw a sketch of what it would look like.

HAVE YOUR SAY: What is the best sculpture you have ever seen? Why did you like it? Use full sentences. No one-word answers.