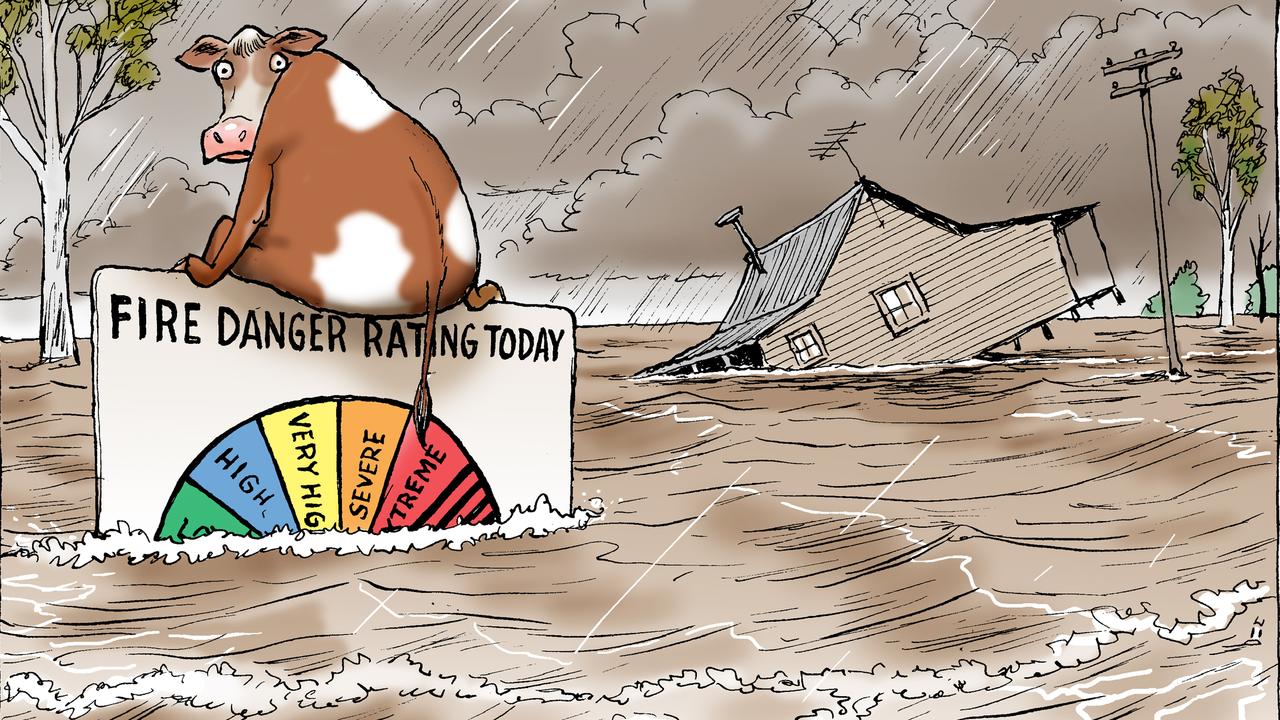 Australian poet Dorothea MacKellar surely nailed it* when she wrote her classic poem My Country in 1904. It sums up this land of amazing contrasts so well. Here are a few lines:

I love a sunburnt country,
A land of sweeping plains
Of ragged mountain ranges,
Of droughts and flooding rains.

We have seen those words played out in NSW and Queensland this week with the once-in-a-generation floods down the east coast of the country, hitting areas around Sydney’s northwest particularly hard. Nearly a metre of rain fell in a few days. We saw the incredible image of a farmhouse sailing down the Hawkesbury River, the Warragamba Dam overflowing and farm livestock swimming for their lives.

What makes this extreme weather event all the more devastating is that little over a year ago a lot of these areas were hit with devastating bushfires. Those fires were the result of a prolonged* drought. So you can see how the people that live there may start to feel like they can’t take a trick*.

We know the climate is changing and there seems to be an increase in the frequency of such extreme weather events and natural disasters: the fact is it’s making some parts of the country very hard to live in. Imagine the poem Dorothea MacKellar could write today!

I thought this weather event should be the topic for a cartoon. I wanted to comment on the fact that we are a nation of extremes when it comes to weather. I live in a bushfire zone and have fought two major fires, one being Black Saturday.

Our ecology* is designed in part to regenerate through these events. Two years after the fires, the forests around our property are lush, and the new eucalyptus saplings* are abundant due to the fires. Our river systems are designed by nature to flood to irrigate natural flood plains, but now there are houses being built in these areas.

I wanted to draw a cartoon that said something about these weather contrasts. Seeing the image of the house sailing down that flooded valley got me started. I drew it in a sea of swirling floodwaters, looking like a torrent* of swirling chocolate milk. But how do I make the contrast point between floods then fires?

One of the most popular symbols of our summer bushfire season are the signs we see dotted along our country highways that alert us to the fire danger at the time. They indicate conditions from low to moderate to catastrophic extreme! Scary stuff! But we all know these signs, they are a part of our lives now. I thought that if any of those signs were in the Hawkesbury valley this week they would be under metres of water!

And that became my contrast point in the cartoon. I drew a Fire Danger Warning sign inundated* by flood water, which on its own is a strong image pointing out the extremes of our environment. In the background, the little farmhouse floats by.

To show the impacts the floods are having on the community, a cow is seeking safety perched atop the fire warning sign. Rain is still falling. I thought the cartoon painted a picture of how our weather challenges us. This is the land we call ’straya*. As MacKellar says in My Country:

I love her far horizons
I love her jewel-sea,
Her beauty and her terror –
The wide brown land for me!