Ben Blanche has been named Australian Geographic Photographer of the Year for 2020 for his shot of a bushfire in the Mt Barney National Park in Queensland.

A photograph taken during the Black Summer bushfires has won top prize in a prestigious* photography competition that captures the splendour* of Australian nature.

The image has earned him the title of Australian Geographic Nature Photographer of the Year for 2020.

The sun had just set when the Brisbane photographer captured the awe-inspiring* movement of fire across the national park at the height of the devastating bushfire season.

A local had reached out to Blanche in November to tell him that the fire had been moving through the mountain and would make an incredible photograph.

“That fire had been burning for weeks by the time I got there,” Blanche said.

“It was a very unpredictable situation. At the time the Rural Fire Service was working out of frame to make sure the fire didn’t cross over into a private property.

“I didn’t feel in danger at any point because it wasn’t a violent fire but it was just incredible to watch.”

“When I was taking the photo I remember saying to the people that I was there with it actually looks like a lava stream coming down a mountain, which we don’t have in Australia, it looked like that,” he said.

“It just looked unlike anything you would get to see in Australia on a mountain.”

Blanche’s photograph was one of 1796 images entered in the competition. Tess Poyner’s shot of this “graceful and green” tree frog in the Daintree made her the junior winner. Robert Irwin was runner up in the junior category with his photo of a scrub python.

Other winners include young photographer Tess Poyner, 17, from NSW, who took out the junior prize for a snap of a “graceful and green” tree frog in the Daintree Rainforest in Queensland.

“I was lucky this petite frog caught my eye, as they’re hard to spot due to their size,” she said.

Robert Irwin, the 16-year-old son of Crocodile Hunter Steve and mum Terri, was runner-up in the junior prize for his shot of a scrub python on the Cape York Peninsula.

WA’s Alex Kydd took out the animal behaviour category for photographing a “fever of cownose rays” on Ningaloo Reef. 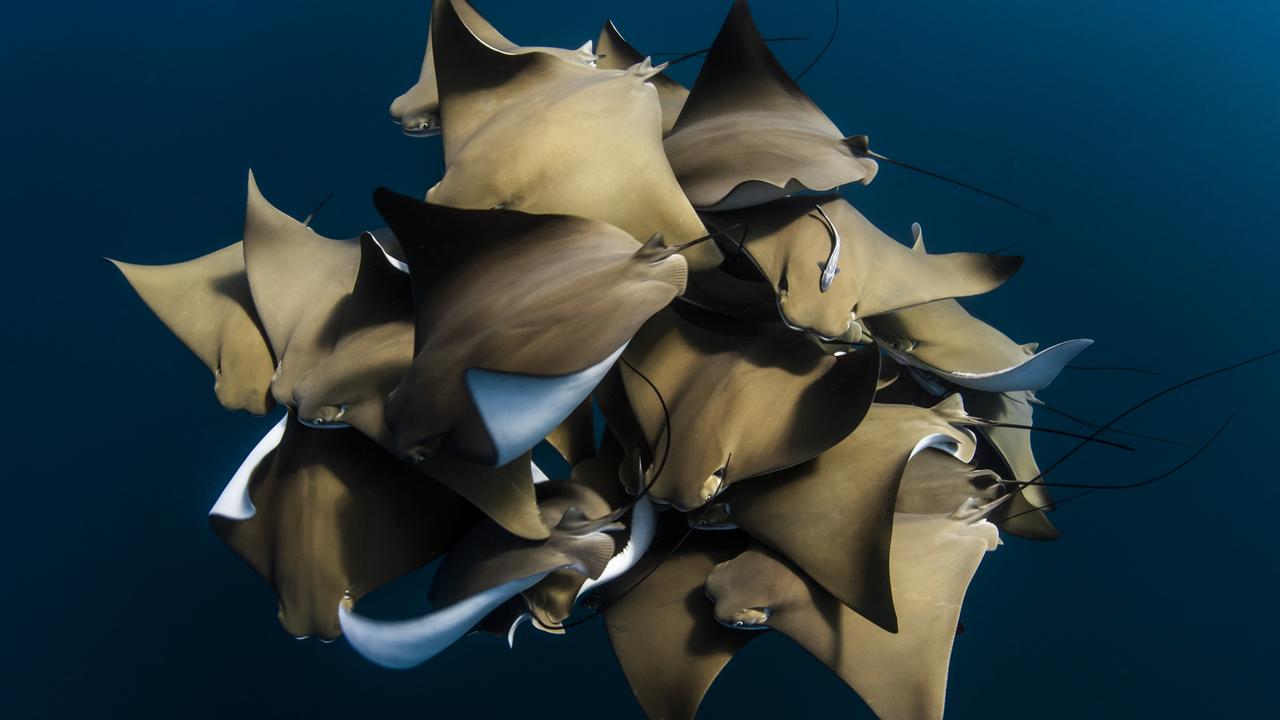 Jasmine Vink from Queensland was the winner in the threatened species category for her shot of a Tasmanian devil.

Belgian photographer Kevin De Vree won the botanical category with his snap of an unidentified species of fungi at Lamington National Park in Queensland.

“I wondered when the ancient trees would start talking and if the fairies would appear,” he told the award’s organisers.

All of the finalists will be on display at the South Australian Museum until November 15.

They will also go on display at the Australian Museum in Sydney when it opens later in the year. A carpet python has taken up residence in a shed in Ethan Mann’s shot, part of his winning entry in the portfolio category. This shot of a long-nosed bandicoot on Queensland’s Sunshine Coast was also part of Ethan Mann’s winning portfolio entry. Victorian Matt Clancy was runner up in the animal portrait category with his photograph of a scaly-tailed possum. Karl Strand, from NSW, was runner up for landscape photograph with this shot of Kosciuszko National Park.

Ball of cuteness and other winning nature photos

Then, choose your favourite photograph from your shoot. Like the photographers have done in this competition, write a short blurb (of approximately 50 words) to accompany your photograph. The blurb may contain information about what your photograph is of and/or how you captured the shot.

2. Extension
If you could travel anywhere on Earth to take a nature image, where would you go and what would you photograph? Why have you chosen this?

Sketch a picture of what you would hope for the photograph to look like.

HAVE YOUR SAY: Which photograph is your favourite and why?
No one-word answers. Use full sentences to explain your thinking. No comments will be published until approved by editors.