Paintings as tall as a 10-storey building and as long as an Olympic swimming pool are popping up all over Australia.

They’re not in galleries, because you couldn’t get a building big enough to place them in — they’re being painted on grain silos.

And even though the paintings are free to see, they’re having huge benefits* for the tiny country towns they’re in. 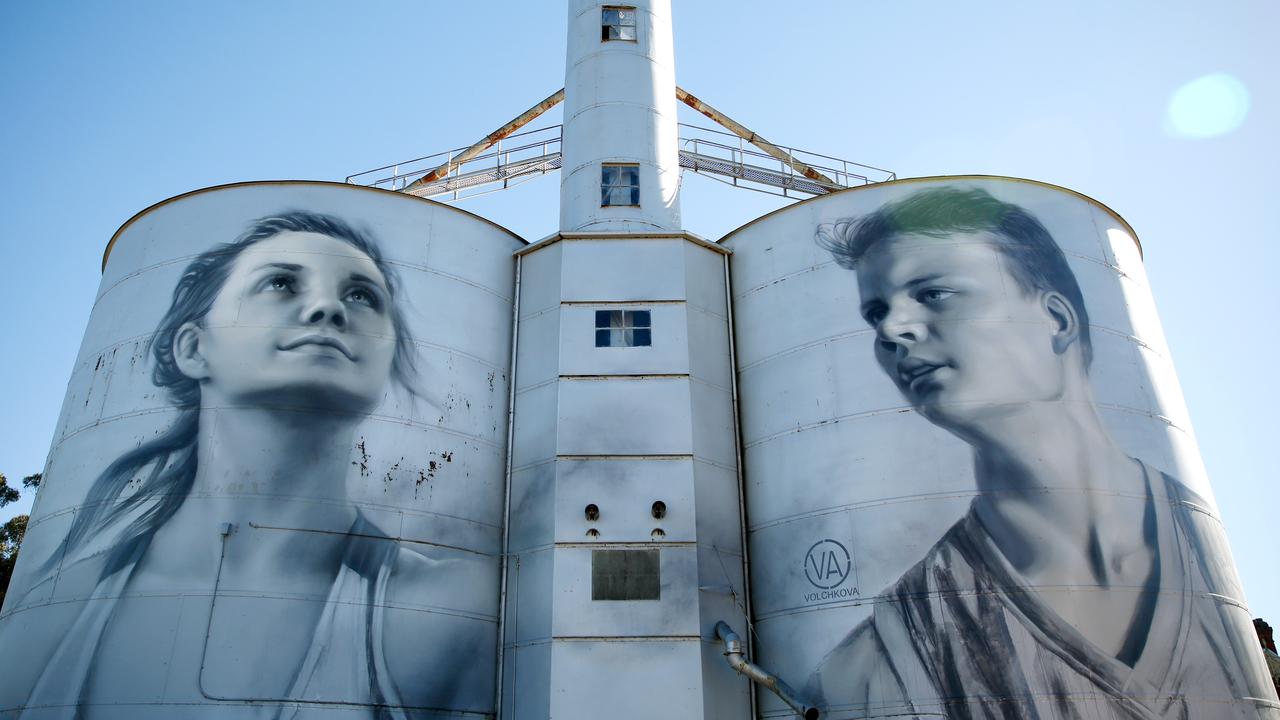 Silo art started at Brim, a town with only about 171 residents 359km from Melbourne in northwestern Victoria.

Brisbane mural* artist Guido van Helten spent a month in the baking sunshine in late 2015 painting a 30m-high mural of four portraits on the disused* silos. It was so hot against the silos in the summer sun he had to get up really early and paint and then stay in the shade for a few hours in the middle of the day, before he could paint again in the evening. People began to visit Brim to see this amazing artwork. The company that owns many of Australia’s grain silos, GrainCorp, made more silos available and other artists began to transform* these local landmarks with portraits of real or imagined local people. There are now six silo murals along a 200km trail across western Victoria and more in NSW, Queensland, South Australia and Western Australia.

The silos across rural Australia were mostly built in the 1930s to store the grain such as wheat, barley and oats that farmers grew. They’re often the biggest, tallest structures across these farming regions. Before the 1930s grain that was harvested was stored and transported in hessian* bags. With the help of tractors, trucks and mechanical harvesters, farmers produced more grain and the silos were built to store it instead of putting it into hessian bags. Farmers brought the grain from the paddocks to the silos, where it was stored until trains could transport it to where it was needed, such as onto ships at ports on the coast. The silos aren’t often used now as GrainCorp stores grain under massive tarpaulins* instead. The mural at Tumby Bay, WA, while it was being painted. Picture: Dion Lebrun

The benefits for the host towns and surrounding areas are huge. Many tourists are now travelling to see the art and the tourists need meals, fuel for their cars, places to stay and are looking for other things to do while they’re travelling, which means shops and other tourist attractions have lots of visitors. More buildings along the Victorian silo-art trail are being painted with murals. International visitor numbers to these Victorian towns have already increased by 30 per cent.

The silo art is also now the star of a series of Australia Post stamps. Silos at Weethalle, NSW, Brim, Victoria, Ravensthorpe, WA and Thallon, Qld, feature on the stamps. WHERE TO SEE SILO ART
Victoria Artist Matt Adnate, in front of the 30m-high silos he painted with portraits of Aboriginal people at Sheep Hills, Victoria. Picture: David Geraghty

2. Extension
What would you love to see painted on a silo? Draw a sketch of your idea and write down why you think it would be a good choice.

QUESTION: If you painted a big mural where you lived, what would you paint?
Explain your answer using full sentences.