Part of Mark Knight’s cartoon on the AFL’s proposal to shorten halftime breaks.

The AFL wants to make halftime* shorter during games, cutting it in half from 20 minutes to 10 minutes.

Footy bosses wish to make the game quicker for fans and limit the chance of television audiences drifting off* during the main break.

But if you’ve ever been to a footy game, you’ll know that halftime is a time for fans to “take care of business”, as we say.

One of the great traditions of going to the footy at the hallowed* MCG, the SCG, Adelaide Oval etc is a meat pie at halftime. If you can afford it! But you have to line up. That takes time if it’s a big game.

Then dad might need a beer, so you have to line up there, too. Mum maybe needs a coffee because it’s cold so that’s more time spent standing in a queue. And then nature calls and you’ve all got to go to the toilet, where the line for the ladies can be massive!

I considered all these things when drawing a cartoon on this topic. 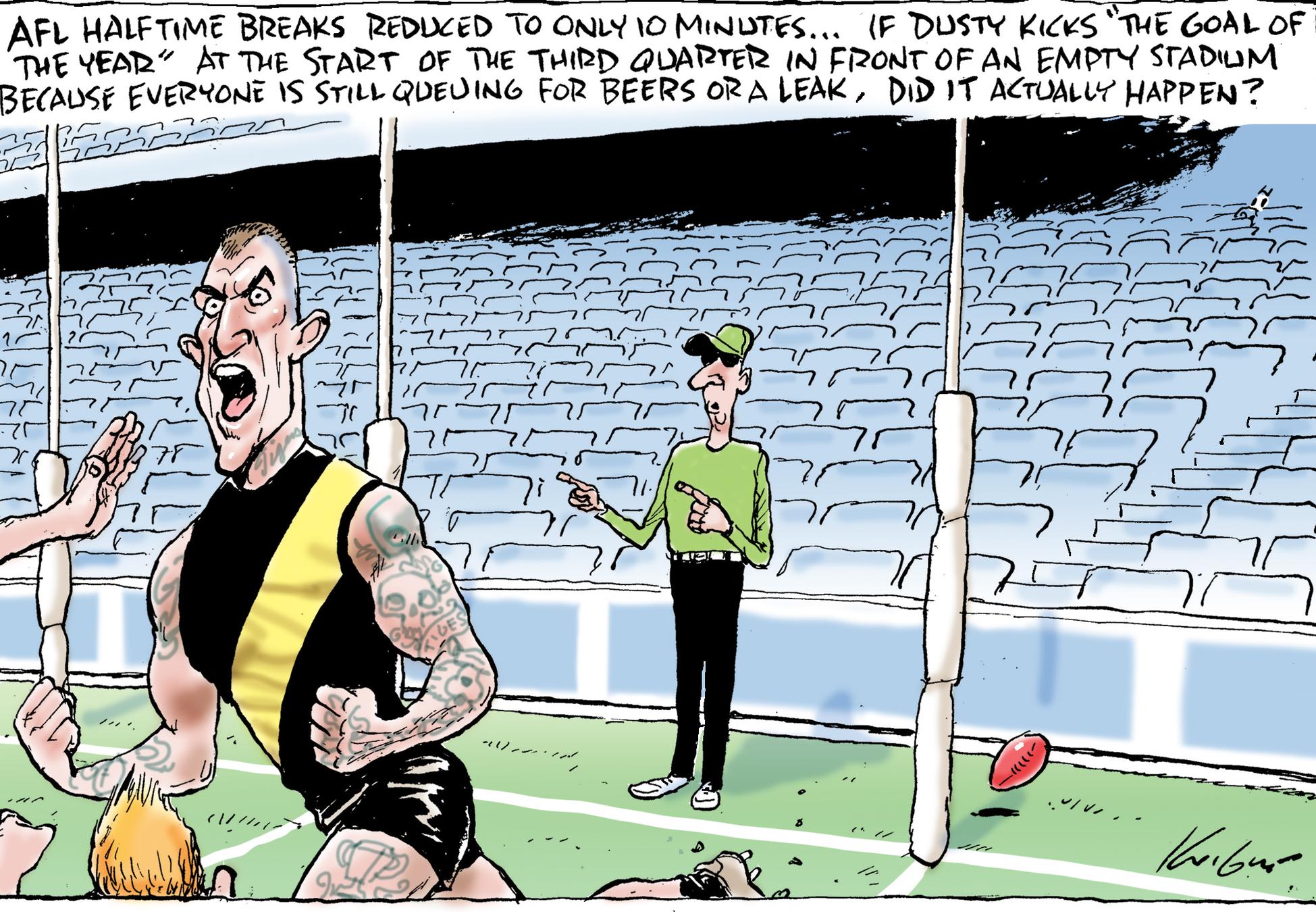 The other point I considered was that the third quarter straight after halftime is known as the “Premiership Quarter”. The quarter where a team steps up and makes a decisive* move to grab the game by the scruff of the neck and take charge.

But if spectators* only have 10 minutes at the break to do all that has to be done, then they will most likely miss the start of the third quarter. Many people may find themselves still in the loo when the ball is bounced!

This is the point I wanted to illustrate and to add emphasis* I felt it would be a catastrophe* if the fans missed a special moment. There is no bigger moment in AFL than when Richmond’s Dustin Martin snaps a goal in front of the Tigers’ cheer squad behind the goals. The stand goes crazy with flags waving and people going berserk*!

So I drew Dusty kicking one of his snap goals, he celebrates with the fist pump, but this time there was no roar from the crowd. Why? Because the grandstand is empty in my cartoon. And why is it empty? Because all the spectators are in the toilet, buying a pie or lining up for drinks!

To caption the cartoon I have adapted a popular saying about forests — “if a tree falls in a forest and no one is there to see it, did it happen?”

This saying means that if humans don’t witness things, they are less likely to believe they actually exist or happened.

So, what if Dusty kicked an awesome goal after halftime and no one saw it because they were all in the loo? Did it actually happen?

I think to avoid this terrible dilemma we should stick to the longer break!

NOTE: This will be Mark Knight’s final cartoon explanation for 2019. He will continue his weekly series of cartoons in 2020.

Knight: Row, row, row your boat to a better world

CLASSROOM ACTIVITIES
1. Dusty makes his point
Read Mark’s explanation about why he chose to draw Dustin Martin in an empty stadium for his cartoon about the proposal to reduce halftime during AFL matches.
Write two, three or four short sentences, just to make sure you understand what the cartoon is saying.

Now consider a caption for Dustin Martin in the cartoon to describe how he may feel about the issue.

HAVE YOUR SAY: Do you think the AFL should reduce the halftime break to 10 minutes? Why is it a good or bad idea?
No one-word answers. Use full sentences to explain your thinking. No comments will show until approved by editors.