Mark Knight: how coronavirus has left the future of Virgin Airlines up in the air in Australia Part of Mark Knight’s cartoon on the future of Virgin Airlines.

In his weekly series, award-winning cartoonist Mark Knight explores the collapse of Virgin Airlines in Australia and how the company could make a buck selling its second-hand planes.

Sadly, the coronavirus* claimed another victim in Australia this week — Virgin Airlines Australia.

With the country in lockdown, state borders closed and a ban on international travel as well as a large debt* the airline was carrying, it finally became too much — so the administrators* were called in to find a new owner or break up the airline and sell all the bits like a huge garage sale*.

It all sounded very complicated as to why Virgin failed.

I tried reading the business sections of the newspapers about how it happened, complicated loans and stuff that just made my brain hurt!

It was a major story and I wanted to draw a cartoon about it, but I had to try and simplify the news story into a cartoon that would tell the story in a humorous way that people could understand.

‘Keep it simple stupid’ is my motto!

So, putting all the financial info to one side, I just considered the basics of the story — Virgin Airlines was for sale and needed a buyer. Simple. I could also add that the airline was considered a little bit second-hand* at a time when the world economy* has been hit hard by COVID-19. Who has the money to buy an airline right now?

One of the things I like to use in my cartoons is a visual metaphor*. it is the use of another image to describe something else. Earlier in the story, I spoke about selling off the airline in parts like a “garage sale”. That is a metaphor.

One of the great visual metaphors and stereotypes* is the used car salesman. No disrespect to any car dealers out there but there is a certain feeling associated with the second-hand car industry! 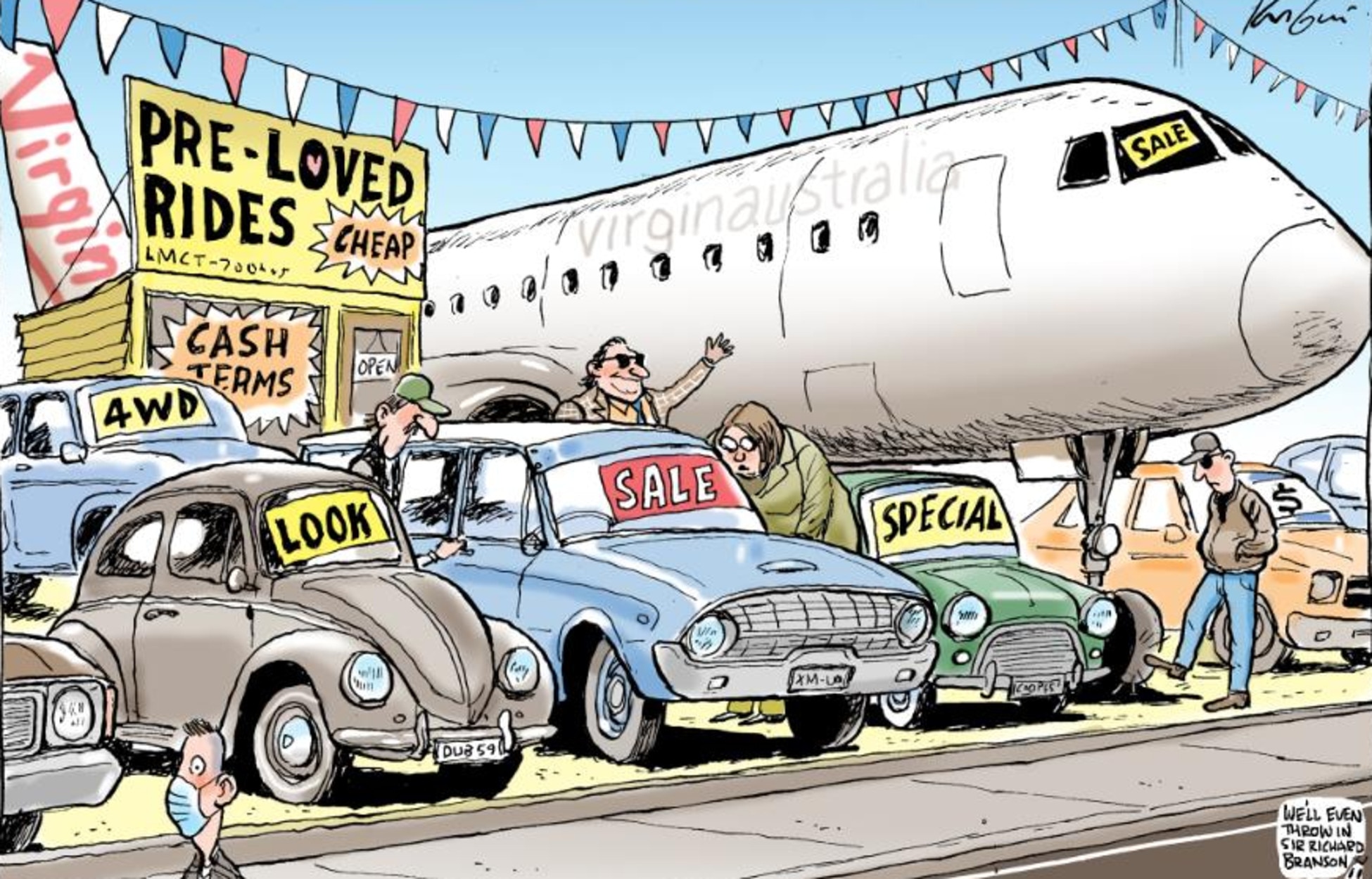 Mark Knight cartoon on the future of Virgin Airlines

An idea flashed before my eyes of a large Virgin Boeing 737 standing in a used car yard. The aircraft sitting among the Commodores and Volkswagens like any other used vehicle with a For Sale sign on the dashboard made me laugh — always a good sign when drawing a cartoon.

The Virgin collapse is the biggest business failure in Australian history and here is the solution, put the plane in Honest John’s car yard and see what we can get for it!

So, I started drawing the image I had in my head of a car yard with old VWs, station wagons and HQ Holdens with this towering jet in the middle of them. In a car sales cliche*, a member of the public in the car yard kicks the tyre of the plane, an act associated with someone checking the quality of the vehicle they are considering buying.

When finished, no caption was necessary. The drawing said it all.
Virgin Airlines, Australia’s second airline was up for sale. And maybe just like a used-car salesman trying to sweeten the deal, the administrators might even throw in the celebrity face and founder of the airline — Sir Richard Branson!

CLASSROOM ACTIVITIES
1. What would they say?
Cartoonist Mark Knight has not used a caption on this cartoon, letting the imagery speak for itself.

HAVE YOUR SAY: Are any of your favourite places closed because of the coronavirus? How does that make you feel?
No one-word answers. Use full sentences to explain your thinking. No comments will show until approved by editors.