Mark Knight: Foolish beachgoers prove that breaking the rules in a pandemic is no laughing matter Use social distancing or just stay home ….. that was the message from the Federal Government to us all to help reduce the number of coronavirus* infections around Australia.

So what happened when we had a sunny weekend?

A whole lot of people went to the beach, breaking the social distancing rules and sitting in groups in the sun. Scenes of crowded Melbourne city beaches at St Kilda and Brighton last weekend were a carbon copy* of what occurred at Bondi Beach in Sydney the week before.

Prime Minister Scott Morrison and Victorian Premier Daniel Andrews were outraged* at the total disregard* for the all public safety rules put in place.

So the beaches were closed that afternoon, just like when toys are taken from a naughty child. I thought I should draw a cartoon on the topic.

I love drawing people on beaches, too. When I’m on a seaside vacation I often take my sketchbook with me and spend time relaxing there drawing all the different shapes and sizes of people around me. They are great models because they just lie there, lovingly captured by my pen! And if they aren’t laying down they are taking selfies and striking poses or sucking their tummies in! It’s hilarious, but a great lesson in human anatomy*!

So, I had my topic but what would the idea be? The message in the cartoon would have to be something about how careless these people had been in the face of this pandemic*.

St Kilda beach in Melbourne is well known to me and one of its great landmarks is Luna Park with its huge beaming* face and large mouth that visitors enter through.

I had a thought last week that putting a huge medical mask over the Luna Park mouth would help promote good hygiene* to prevent the virus. I drew sketches in my imagination of what it would look like and decided that I would use that idea in a cartoon when the time was right. That time came when everyone rocked up to the beach against medical advice. 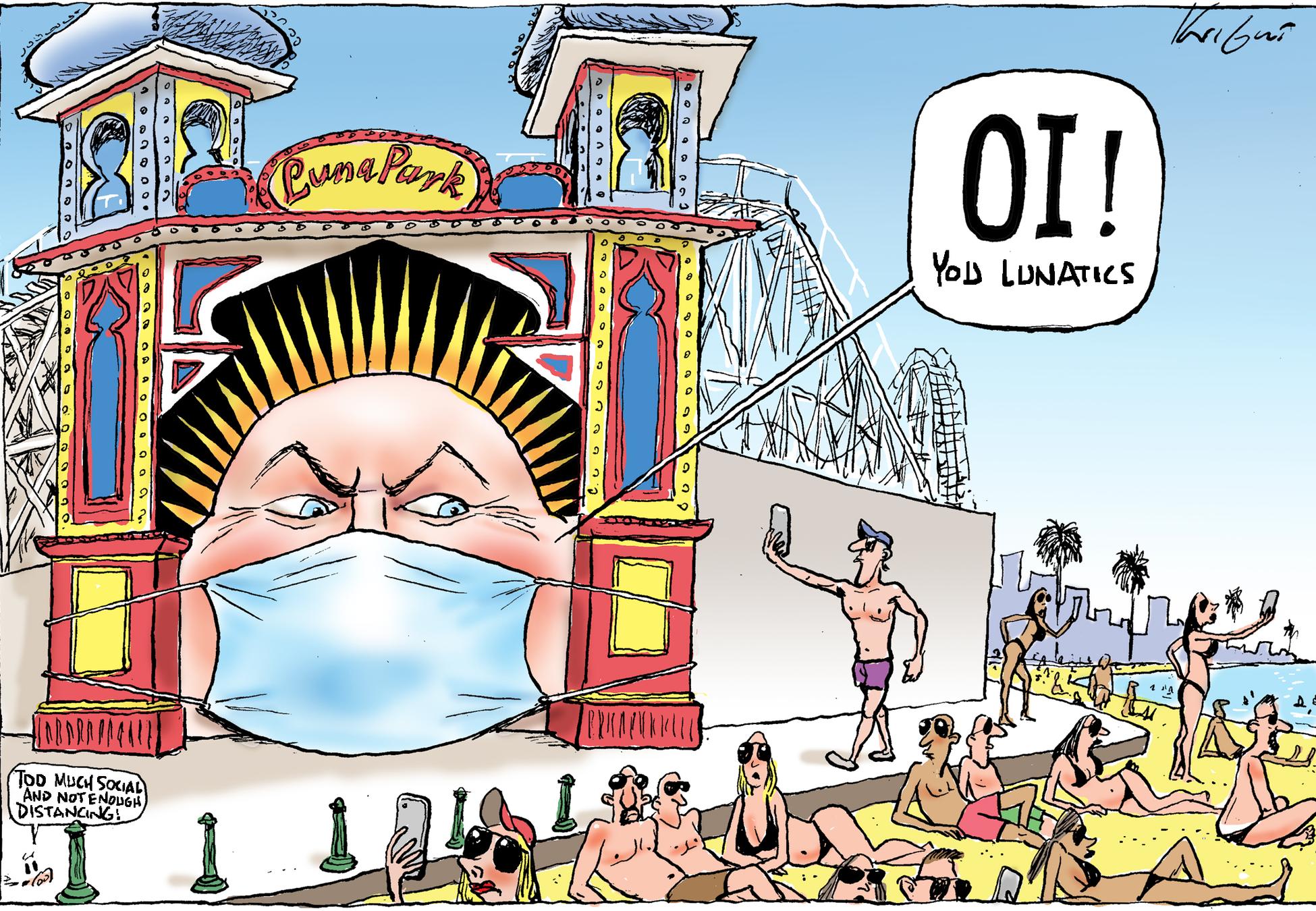 So I drew the entrance to Luna Park with a medical mask covering the laughing face.

It is a strong image and instantly conveys* the message that we are in a medical crisis.

With a bit of artistic licence I had the mask-clad* Luna Park face staring disapprovingly at a crowd of people on the beach.

There was a nice contrast* between the two — one obeying safe health practices by wearing a mask and the others openly disobeying the advice to social distance and not spread infections.

However, I thought I needed a caption to strengthen the idea.

What would the Luna Park face say to these people? A great Aussie expression and a good way to get people’s attention is the phrase “OI, YOU!” People tend to look up when it’s shouted in one’s direction. Maybe that?

Then I thought it would be funny — and perhaps appropriate in theses crazy times — that Luna himself should be referring to this lot of desperate sun seekers as “lunatics*”.

So the speech bubble coming from Luna Park’s masked mouth is a simple “OI, YOU LUNATICS!

I’m sure the Prime Minister and the Victorian Premier thought the same thing!

Outside gatherings cut to two to slow Covid-19

LISTEN TO THIS STORY
To come

CLASSROOM ACTIVITY
1. New punchline
Cartoonist Mark Knight has used a play on words in his punchline from the Luna Park face to express how foolish the sunseekers on the beach have been.

Using your sentences to help you, write a new punchline for the cartoon that will keep Mark’s meaning the same and still make the purpose of the cartoon clear for children or people who haven’t been reading the news this week.

VCOP ACTIVITY
A proper noun is a noun that names a particular person, place or thing. It always has a capital letter.

HAVE YOUR SAY: What message would you give people who ignore social distancing rules?
No one-word answers. Use full sentences to explain your thinking. No comments will show until approved by editors.