Mark Knight: Empty streets can’t stop us saluting the spirit of the Anzacs and ghosts of Diggers past 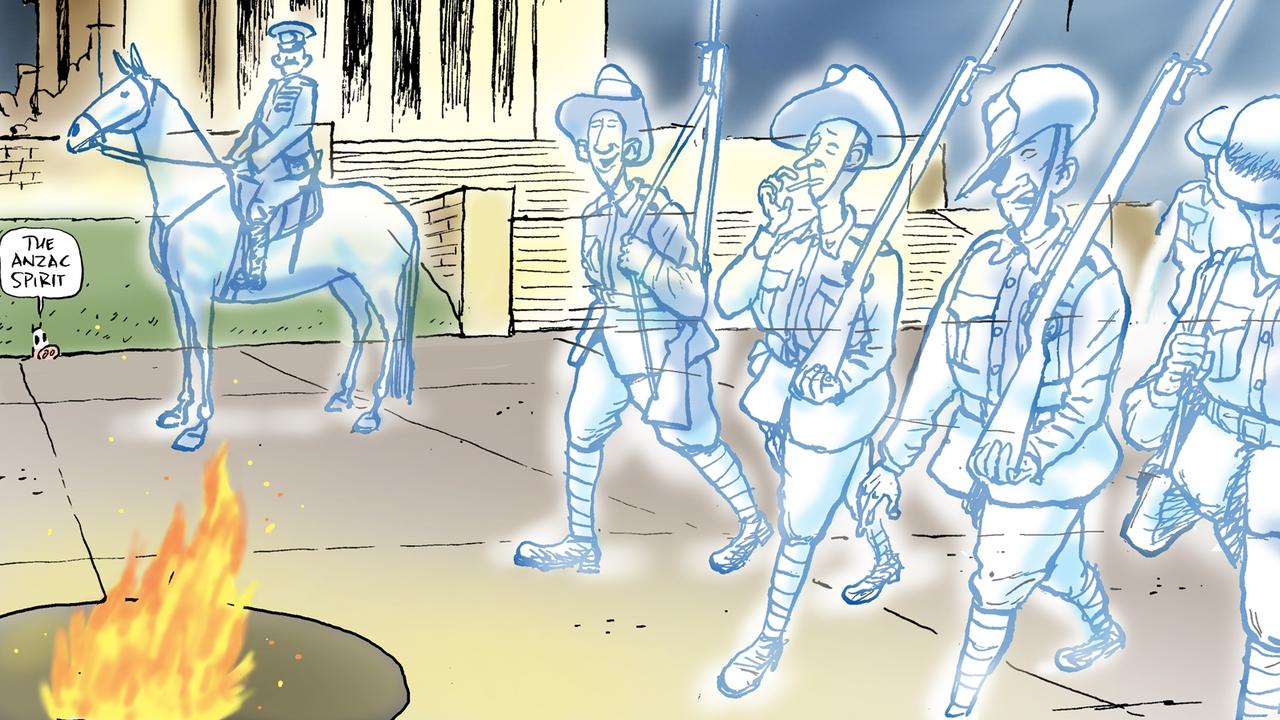 In his weekly series, award-winning cartoonist Mark Knight captures the spirit of the Anzacs and the ghostly impact the coronavirus had on one of Australia’s most sacred days of remembrance.

We are all facing many changes to our lifestyle and routines in these times of COVID-19.

Social distancing, staying at home, remote learning (hope you’re all going okay with that!), and the cancellation of sports and major events.

One of the most sacred* events on the calendar in Australia is Anzac Day, where we mark the anniversary of the Gallipoli landings in World War I and remember all Australian servicemen and women who have fought in wars and paid the ultimate price*.

Sadly, Anzac Day was another casualty of the coronavirus, and this year there were no marches or parades. No Dawn Services where tens of thousands of people would gather at shrines* around the country in the darkness to pay their respects to the fallen*.

Instead, in a more private gesture, some of us stood outside our front gates in the dawn with candles lit to show that we still cared and remembered. 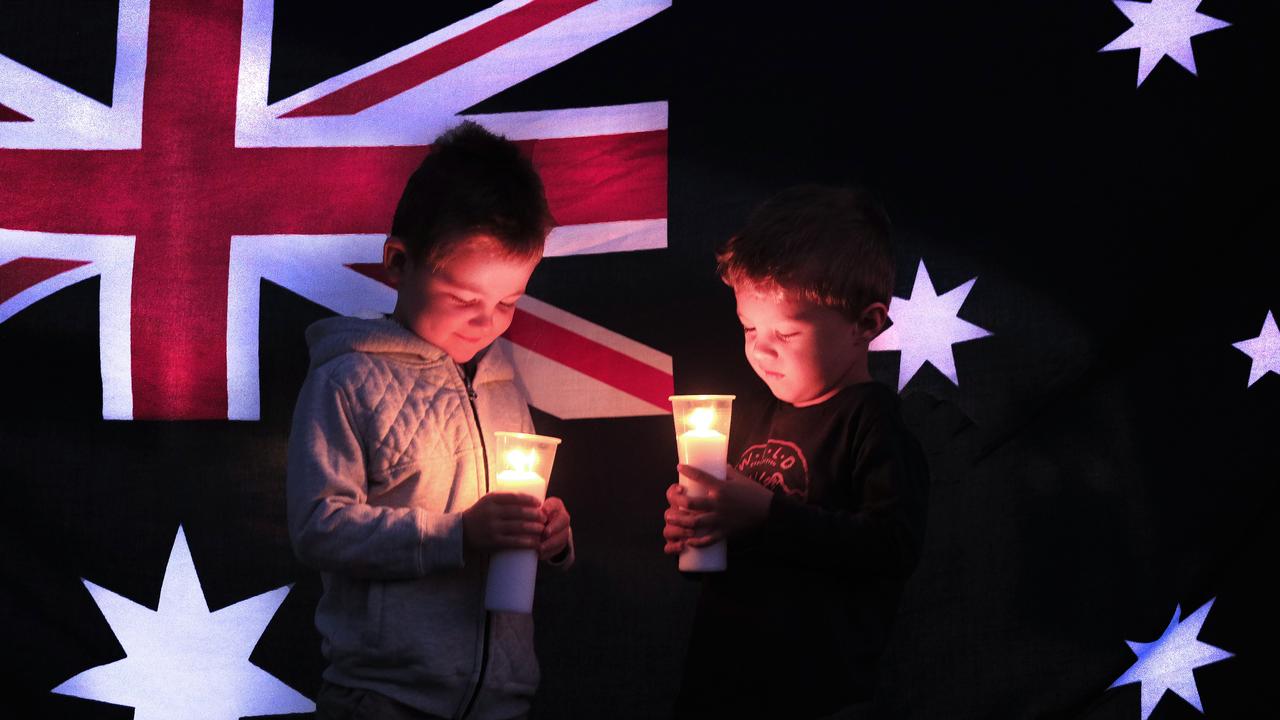 William Miller (4) and Easton Benson (4) hold candles in front of the Australian flag as they reflect on Anzac Day at Banora Point in their grandmother’s driveway. Photo: Scott Powick

But there were no Diggers* marching down our streets on April 25.

Every Anzac Day I draw a cartoon about the day and what it means to us. It seemed the topic this year would be that there would not be an Anzac Day in the traditional sense.

I thought of the empty streets around our war memorials at dawn this year and it made me think that even though there are no service people marching this year, maybe the spirits of those passed might still be there?

Australians honour the Anzacs at home

The reason why I had this thought was due to one of my favourite wartime paintings by WWI Australian war artist Will Longstaff who painted it in1927.

It’s called The Menin Gate at Midnight and depicts the gates which lead out of a city in Belgium where allied* soldiers left for the Western Front*. It was one of the bloodiest episodes of the war and in the painting are the ghostly souls of thousands of soldiers marching past that landmark in the moonlit night. 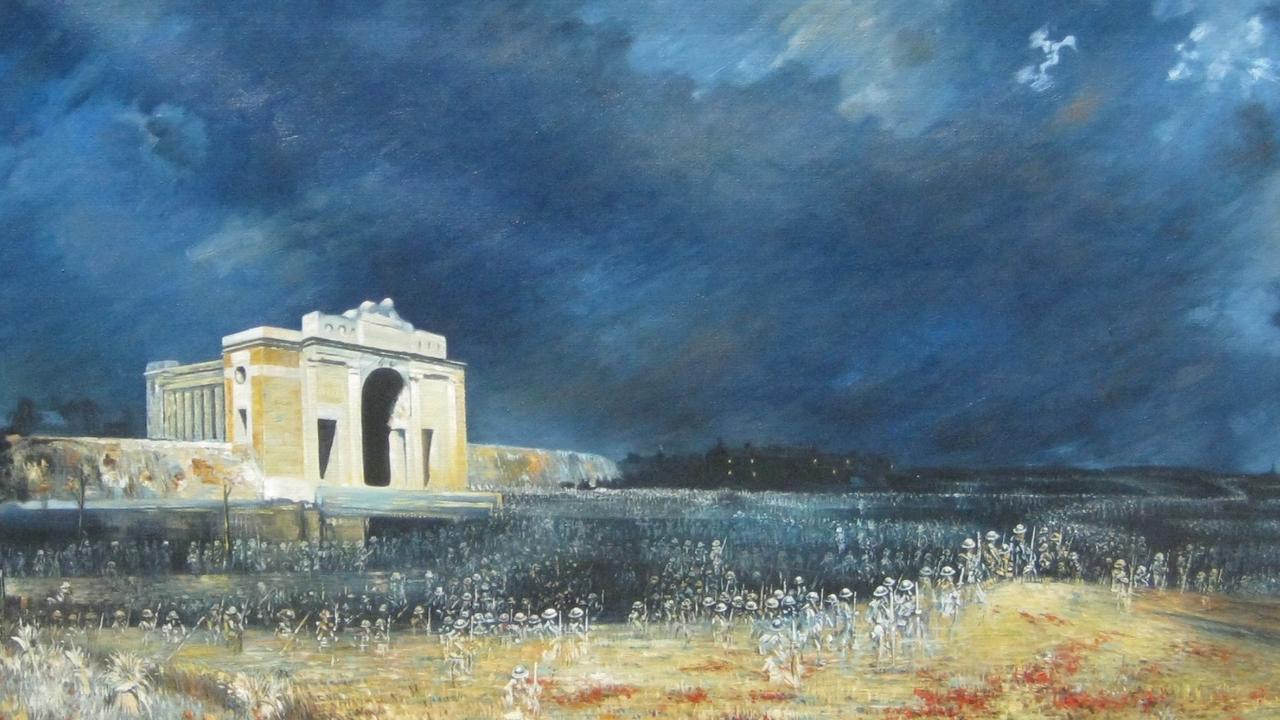 The painting was a remarkable success in its day, particularly for the way it captured the loss of so many but reminded us that their memory and deeds* would march on. It now hangs in the War Memorial in Canberra.

Deeply influenced by that picture, I wanted to create a cartoon in the same manner.

Even though our streets and war memorials would be empty of people due to the coronavirus lockdowns, the Anzac sprit would rise to the occasion and march instead. So I drew the sprits of Diggers from WWI marching past the Shrine in Melbourne. Hundreds of them, all in full kit*. There’s a bit of larrikin* in them as they march past and one jokingly says to another “Who says no-one would be marching on Anzac Day?”

The streets were not empty at all, they were full of the Anzac spirit!

Those famous words “Lest we forget” are demonstrated here. We should not forget the fallen, by remembering them, they and their brave deeds live on in us.

Mark Knight: Virus leave future of Virgin up in the air

Anzac Day explainer: the dawn of the legend

CLASSROOM ACTIVITIES
1. Spirit of the Anzacs
Cartoonist Mark Knight has drawn this Anzac Day cartoon with a lot of respect for Australia’s fallen soldiers. Read the article and then summarise in two or three paragraphs what it is about and why Mark Knight decided to draw it this way.

Think of a new line that the little character could say as he watches the ghostly soldiers march by. The words you choose need to be in line with Mark Knight’s thinking about the cartoon and the spirit he is trying to capture.

Once you have found them, see if you can up-level them. Think of synonyms you could use instead of these basic words, but make sure they still fit into the context of the article.
Re-read the article with your new words.
Did it make it better?
Why/Why not?

HAVE YOUR SAY: How did reading this article make you feel about Anzac Day and the Diggers?
No one-word answers. Use full sentences to explain your thinking. No comments will show until approved by editors.