How to make your kitchen table a kids’ art studio 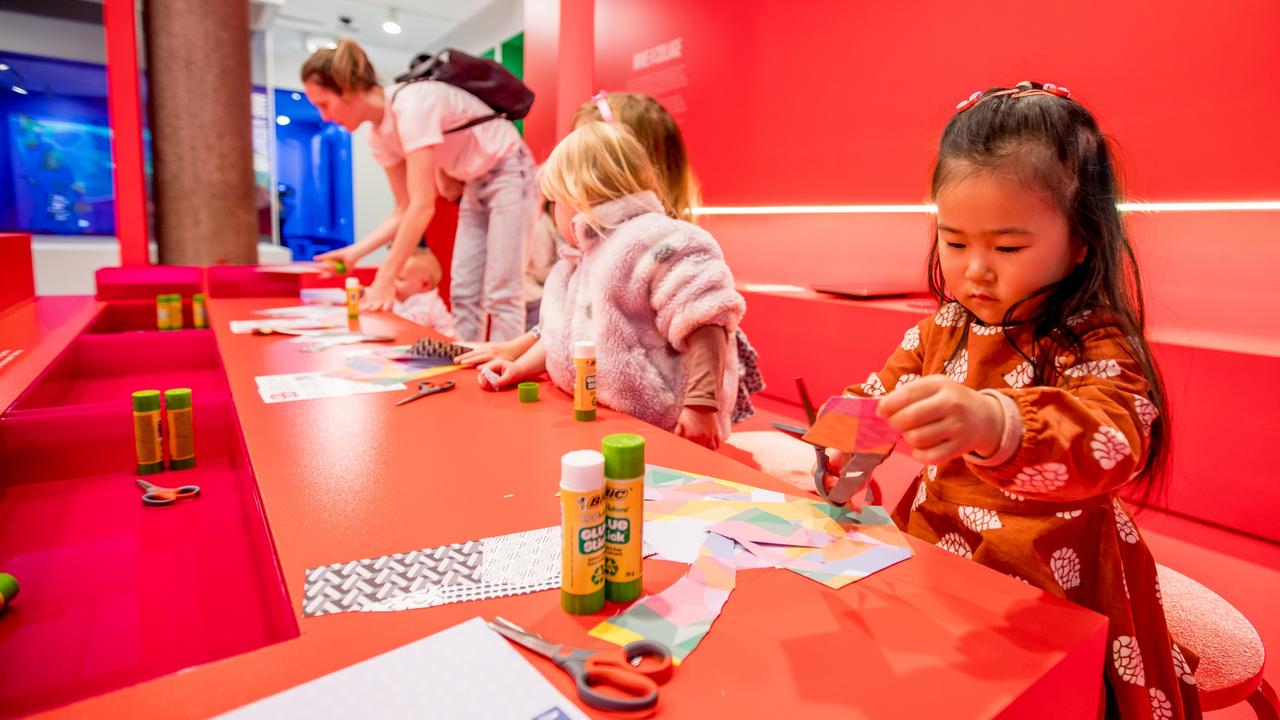 Collage – like this one being created at NGV kids’ exhibition Making Art: Imagine Everything is Real – is a great at-home art activity. Picture: Tim Carrafa

Pablo Picasso once said “every child is an artist” – and now, kids are being encouraged to “turn their kitchen table into their art studio”, while using their homes and the items in them as sources of creative inspiration.

Budding young artists should take cues* from 20th-century masters like Picasso and Georges Braque and use their imaginations to turn ordinary items – like cereal boxes, old magazines and shopping bags – into extraordinary works, the curator* of children’s programs at the National Gallery of Victoria, Kate Ryan, says.

Ms Ryan said Covid lockdowns had made children and families familiar with “being creative in the home” – and there was no reason not to continue this practice now life was a little more normal. Kids can take cues from artists like Georges Braque and turn everyday items into masterpieces.

“Drawing, painting, playing and making are recognised by leading educators for inspiring confidence and cultivating* a sense of wellbeing in early learners,” she said.

“Making art, whether it be drawing on paper or building with blocks, (provides) children with opportunities for self-expression, discovering new ideas and collaborating* with others, while also developing critical thinking* and problem-solving skills.”

Ms Ryan said it was more important than ever for children to learn these skills because many jobs wanted people who were good at these things. So mastering these skills “will help set up today’s learners for their future success”. Collage was a great place to start for any at-home artists, she said.

French artist Braque pioneered* the technique, alongside Picasso, creating one of the first collages in 1912, titled Fruit Dish and Glass, by pasting pieces of woodgrain wallpaper on to a charcoal drawing.

“Braque’s family had a house painting and decorating business, so he drew from this,” Ms Ryan said.

She said kids could create their own collages using materials like old shopping bags, wrapping paper, magazines and newspapers – as long as they checked with their parents first.

Some of Picasso’s works could also inspire at-home art, Ms Ryan said – in particular, the paper cutouts he made “from a very young age”. “There is a wonderful story about Lump, the dog that ate a Picasso,” she said.

“When he found out this little dachshund who moved into their home had never encountered a rabbit, he cut out a cardboard rabbit from a cereal box and the little dog ran off with it and ate it in the backyard.

“Creating cutouts using recycled paper and cardboard, in the spirit of Picasso, is another great activity people can do at home.” Picasso and his dog, Lump.

“When the drawing is revealed, you get a surrealist image,” she said, noting players could also cut out body parts from magazines to play.

“The game becomes something you do as a family – and you can discover who the real artist is in the family.”

Ms Ryan said kids could also play a digital version of this game at Melbourne’s NGV International as part of its free, all-ages kids’ exhibition, Making Art: Imagine Everything is Real, which runs alongside major exhibit The Picasso Century until October 9. “Make a Creature” is one of four hands-on activities reflecting techniques invented or used by 20th-century European artists on offer at the kids’ exhibition.

The others are “Make a Collage”, reflecting Braque and Picasso’s invention of collage, “Make a Poem”, inspired by Russian artist Natalia Goncharova’s works, and “Make a Sculpture”, which takes cues from Picasso’s creation of paper sculptures.

The exhibition is complemented by activities at Melbourne’s Chadstone shopping centre, running until July 10, which also include the “Make a Creature” game, and an “Emerging Artists Space” where young artists can explore portraiture and sculpture.

CLASSROOM ACTIVITIES
1. Budding artists
In a group of three, play the drawing game of ‘Exquisite Corpse’ mentioned in the article.

Open up the drawing and see your creation. Display your work to your class if playing at school or family if playing at home. This is called a surrealist image. Discuss each other’s creations and the ones you like best.

2. Extension
Make a collage or draw a portrait of someone to express your artistic abilities.

What are the advantages of being creative?

VCOP ACTIVITY
Exquisite Corpse goes on an adventure
Have you heard of Flat Stanley? He is a book character who was flattened and decides to make the most of being flat and goes on many adventures. With a partner, why don’t you play the art game Exquisite Corpse and create your own unique character that could come to life and go on its own adventure?

Give your character a name. Decide how it will come to life. Decide what adventure they will go on, what problem will occur, and how it will be resolved.

Share your adventure with another pair and see what adventure their character went on.