Get drawing for the Kids News Cartoon Contest 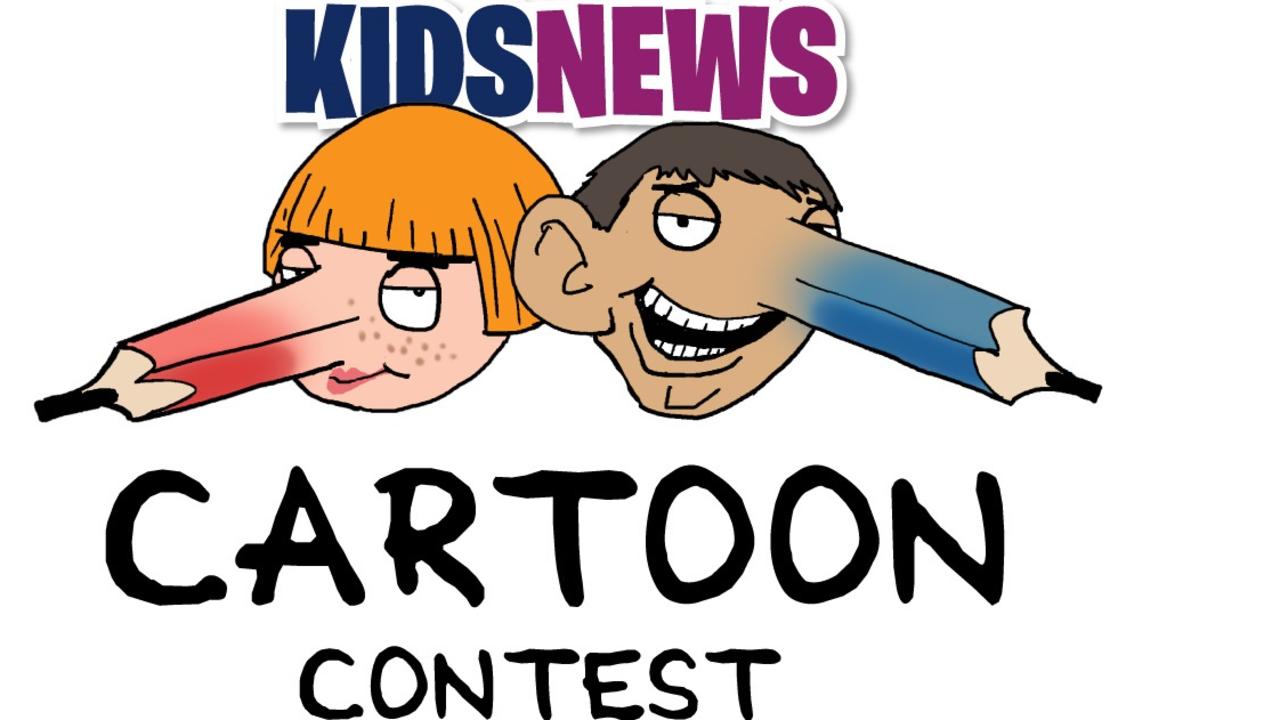 Sharpen your pencils, the Kids News Cartoon Contest is here.

The contest challenges students in Years 3 to 8 to create a cartoon on a news event that matters to them, whether it’s a sporting achievement, a political manoeuvre or an environmental issue that’s made headlines, or even a caricature of someone famous.

News Corp Australia’s big-name cartoonists will judge the entries and create a personal caricature of the winners in three age groups: Years 3-4; Years 5-6; and Years 7-8.

Not sure where to start? Let’s ask the experts.

Cartoonists Mark Knight, from Victoria’s Herald Sun, Warren Brown, from The Daily Telegraph in NSW, Brett Lethbridge, from The Courier-Mail in Queensland, and Peter Broelman, from South Australia’s The Advertiser, say keeping up with what’s making news is vital. The Daily Telegraph cartoonist Warren Brown, pictured in his studio, says a good cartoonist knows what’s going on in the world.

“It’s important to have an understanding of what’s happening in Australia and around the world,” Mr Brown said.

“It’s not just about politics. News can be about a whole range of things: movies, music, sports, art, television, climate, money, the list is endless.”

Next comes turning this knowledge into an idea for a cartoon.

“A cartoon is 95 per cent idea and 5 per cent drawing,” Mr Broelman said. “Cartooning is a form of expression of an idea or thought. Without that, it’s just a drawing.” 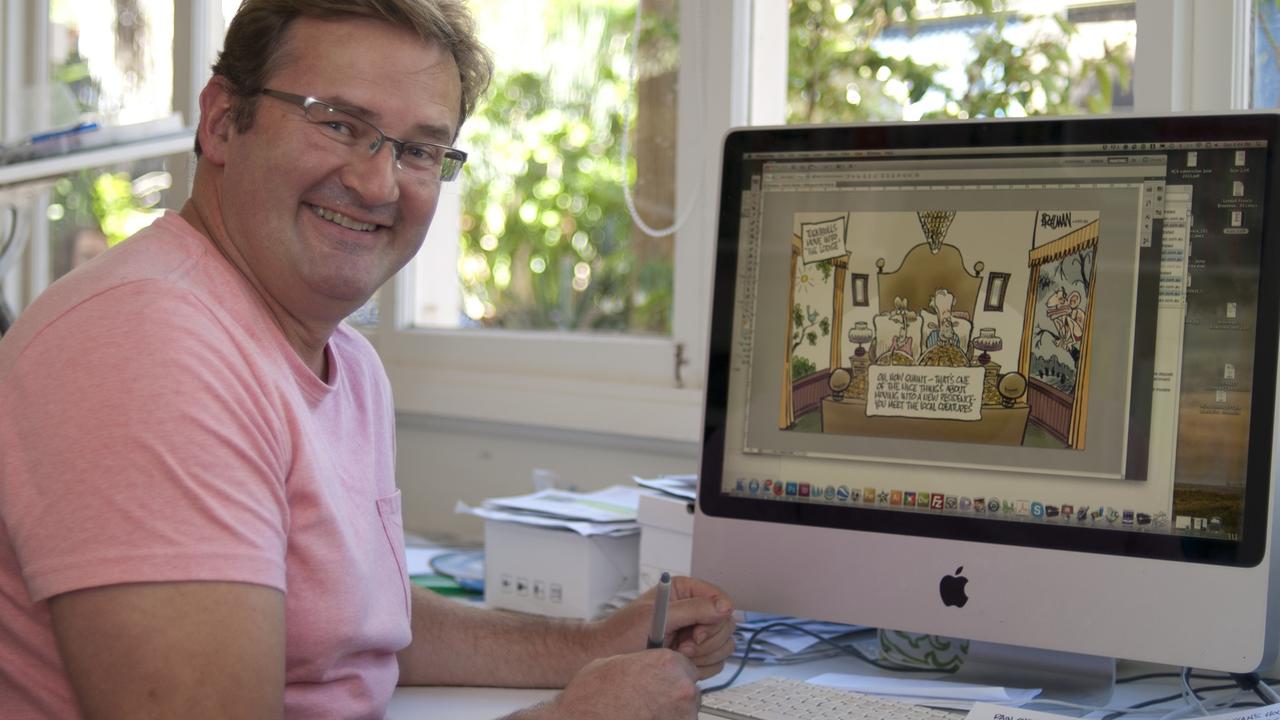 The Advertiser’s cartoonist, Peter Broelman, says a cartoon must express an idea or a thought about a particular topic.

Humour is a popular tool for cartoonists, as is using metaphors, according to our experts.

“You describe an object or action in a way that isn’t literally true, but helps explain an idea or make a comparison. It might be a car going over a cliff, a politician stuck in mud, or an oven called ‘climate change’.”

Keeping it simple is another golden rule. You want those who see your cartoon to understand it.

“You have to make sure that your message comes across in a snap. Most people don’t like wordy cartoons and having to work to understand your message,” Mr Broelman said.

“An old cartoonist once told me not to write more than four lines of words. I try to keep to that,” he said. Mr Lethbridge said he always ran his cartoon past another person to check if the message and humour were easily understood.

He also said he tried not to take sides with his cartoons.

“I try to have the cartoon show the absurdity of a situation rather than saying something is good or bad,” he said.

1. Don’t try to draw a cartoon in one first take. Drawing is like sport, you have to warm up, stretch the imagination and your drawing hand. Make sketches, start doodling like drawing circles and making crazy faces out of them!

2. Use reference material. If you’re drawing a tree, Google pictures of trees to help guide you. The same with people. I always use a picture reference of the people I’m drawing, even if I’ve drawn them a thousand times. Herald Sun cartoonist Mark Knight, pictured with one of the posters he drew before the 2021 AFL Grand Final was decided, urges budding cartoonists to be bold with their drawings. Picture: Nicki Connolly

3. Look at other cartoonists you like and copy from them. This will teach you about composition, technique and drawing style. Eventually your own style will emerge.

4. There are many different things to draw with these days, but start off with the basics: a pencil, eraser and paper. Then ink in your drawing with a fineliner black pen. You can colour with coloured pencils or there are some great coloured markers in art stores. You can also draw on iPads or Wacom drawing tablets. Add in programs like Photoshop or Procreate, and the sky is the limit!

5. Get a drawing diary. Carry it around and sketch things, places, people, objects. It will improve your drawing. I carry mine when I travel and I have a great collection of sketches from all over the world! Using visual metaphors, like dinosaurs in this case, can help get your idea across.

7. Using a visual metaphor can help illustrate an idea. For example, using an elephant in your cartoon symbolises that something is huge. Or drawing a rodent has a totally different implication.

8. Be bold with your drawings! It’s a cartoon so exaggerate things! You own the world you are creating on paper, so don’t hold back. Make a big splash!

9. Add humour to your cartoon. Not all cartoons have to be funny, but humour is a great way to convey a message. And your readers will thank you.

10. Simplicity is important. The idea must be conveyed to the reader as easily as possible. Try to limit the amount of words in your captions. Remember that we read from left to right, so speech bubbles and visuals should read in that direction to avoid confusion. But most of all have fun with it!

The Kids News Cartoon Contest runs from 9am (AEDT) on Monday, November 22, to 5pm (AEDT) on Friday, December 3.