I like to cover all areas of the news in my cartoons. From politics to sport, celebs to science. In the past 12 months I have drawn more cartoons on viruses and immunology than I care to remember! Also the sad times of national tragedy and the deaths of the famous and powerful.

One such death in the past week that has focused the world’s attention is the passing of HRH* Prince Philip, Queen Elizabeth II’s consort (husband). He was 99 years old and had been married to the Queen for 73 years.

Philip was seen as the unwavering support to a Queen who has ruled over the Commonwealth since the 1950s. Her reign has brought stability through a strong sense of duty and service, despite other members of the Royal household not being so dutiful! The loss of Prince Philip in this partnership was the end of an era.

A week of mourning in the United Kingdom culminated* in the Prince’s funeral in the grounds of Windsor Castle in St George’s Chapel. You might remember that is where Harry and Meghan were married back in 2018.

Due to COVID, this would be unlike other Royal funerals. There would be no huge funeral procession with thousands of Brits lining the streets as was the case with Princess Diana’s farewell. No long list of dignitaries* attending, nor a team of Royal horses pulling a gun carriage with the Royal casket atop. Britain’s strict COVID protocols* restricted attendees to just 30 people, and the public was dissuaded* from coming to Windsor. Prince Philip even designed a simple Land Rover to haul his casket to the chapel! Inside the chapel the 30 mourners were spaced apart and had to wear face masks.

This is where a remarkable photo was taken of the Queen. An image that moved a world still grappling with the deprivations of the coronavirus, and one that moved me to pick up my pen.

She was pictured sitting in the ornate Gothic style chapel, she is wearing black and she is seated alone. She looks diminutive*, even vulnerable. There is not another family member in the picture. People around the world were shocked and saddened that due to COVID rules she should have to mourn the loss of a lifetime partner on her own.

I looked at the picture and I started to sketch the scene. I drew the ornate woodwork of the chapel seats and the carvings of religious figures and then I sketched the Queen sitting there on her own.

I have been drawing the Queen for a long, long time and one of the things I realised was that whenever I drew her, I usually drew Prince Philip standing beside her! They were never apart in my drawings. This may be the first time I draw her on her own. Or was it?

I thought about the length of their relationship. Seventy three years. A lot of memories there. Those memories don’t just disappear overnight. The Queen would still hang on to those thoughts as we all do when we lose something. Then there is the spiritual side of things. Some people strongly believe in the spirit of a person living on. These spirits watch over us and in times give us comfort, they say.

Considering all that, I did draw Prince Philip sitting next to the Queen as I had done for decades. But on this occasion I have drawn him as a spirit, a strong memory that will not fade from the Queen’s mind. In the cartoon the memory is giving her comfort on such a day. The cartoon is saying that despite her being seated away from others, she is not totally alone. 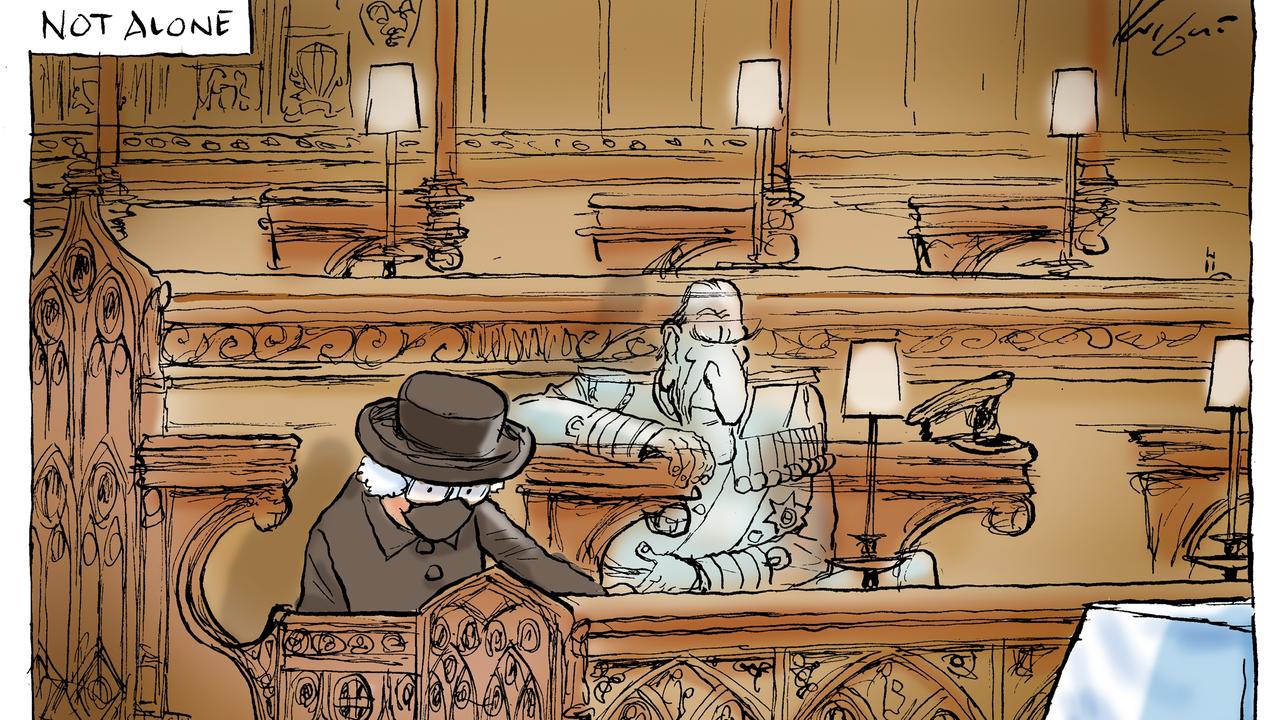 Harriet the monkey visits the Queen

CLASSROOM ACTIVITIES
1. Caption it!
Cartoonist Mark Knight has only used a two-word caption on this cartoon, letting the imagery speak for itself.

Using your sentences to help you, write a longer caption for the cartoon or some thought bubbles or quotes from the person in the cartoon that will make Mark’s meaning clearer for children or people who haven’t been reading the news this week.

VCOP ACTIVITY
Stretch your sentence
Find a ‘who’ in the cartoon.