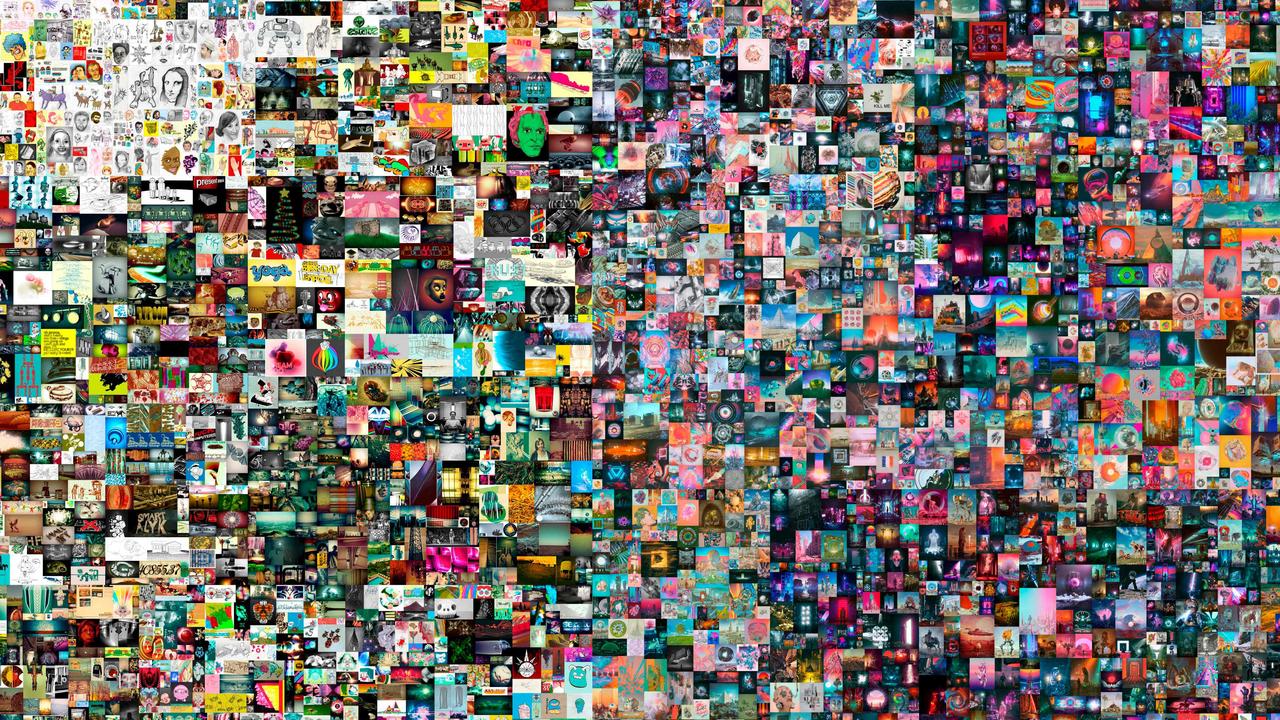 Beeple’s digital artwork is made up of 5000 individual images that he posted online over the past 14 years. Image: Christie’s Auction House/AFP

A digital collage* by an artist named Beeple has sold at auction for almost $90 million.

The price was a record for an artwork that exists only digitally and was far greater than the amount paid for physical works by many better known artists.

The piece, titled “Everydays: The First 5000 Days,” sold for $69.4 million US (or $89.8 million in Australian currency) in an online auction that auction house Christie’s said made the artist one of the “top three most valuable living artists”.

Beeple, whose real name is Mike Winkelmann, created the collage in a JPG file using 5000 individual pictures that he had been posting online each day since May 2007.

He made the collage in February as a non-fungible token, also known as an NFT. An NFT is a digital object such as a drawing, animation, piece of music, photo, or video, with a certificate of authenticity* created by blockchain technology.

Blockchain is a digital system of recording information about the buying and selling of a digital object. Rather than storing data in tables in a database, the data fills up “blocks” which are then linked to previous blocks. This makes the information almost impossible to change.

It also means an NFT is a way to prove that an item is one of a kind and aims to solve a key problem with digital collectibles, that is how to claim ownership of something that can be easily and endlessly copied.

Christie’s said it was the first time a major auction house had offered a digital-only artwork with an NFT as a guarantee of its authenticity, as well as the first time cryptocurrency* had been used to pay for an artwork at auction. Beeple said the sale marked the start of a new era* for art.

“Artists have been using hardware and software to create artwork and distribute it on the internet for the last 20-plus years but there was never a real way to truly own and collect it,” Beeple said in a statement released by Christie’s.

“With NFT’s that has now changed. I believe we are witnessing the beginning of the next chapter in art history, digital art.”

About 22 million people watched the final moments of the auction on the Christie’s website, with bidders from 11 countries taking part.

Others have also joined the craze for NFTs. Twitter chief executive Jack Dorsey put his first ever tweet — “just setting up my twttr” — up for online auction as an NFT, with bids reaching $2.5 million US.

Rock band Kings of Leon is offering a version of its latest album as an NFT, while a blockchain company bought a piece of work by British artist Banksy, burned it and then put a digital version on sale as an NFT.

And the National Basketball Association in the US is also teaming up in a plan to sell virtual sports cards as NFTs.

Is vandalising vandalism a new form of art?

Home is where the art is

CLASSROOM ACTIVITIES
1. What Do You Think?
Why would someone would pay $89.8 million (Australian dollars) for Beeple’s collage? Write down as many reasons as you can think of.

2. Extension
Can you think of, or invent, another way that digital collectibles could be protected or authenticated? Describe your idea or invention in detail.

They can be used for a variety of effects: to add more detail, to add humour, to connect with the reader etc. My little brother, (the funniest kid I know) got himself into big trouble today.