Blacksmiths set to fire up a Footscray metal art festival

AN ANCIENT trade will fire up a Footscray festival on the banks of Melbourne’s Maribyrnong River later this month.

The Waterside Blacksmithing Metal Art Festival is back at the Waterside Forge with red hot metal ready to be transformed into amazing displays.

Blacksmithing is an old profession and craft. Blacksmiths shape steel and iron into metal objects through the use of heat, tools and physical force.

But professional blacksmithing died out almost entirely as factories and machines proved to be a cheaper way to manufacture* goods in the 20th and 21st centuries.

The Waterside Blacksmithing and Metal Art Association president Steve Phillips said the festival would start with a bang, literally.

“We’ll launch the festival with a 20-foot fireball over the Maribyrnong River with help from the mayor,” Mr Phillips said. 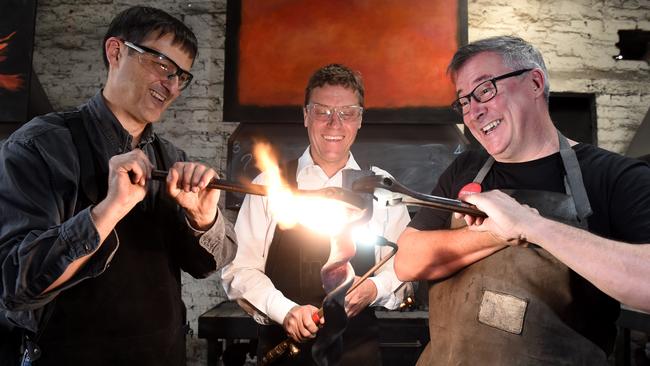 The blacksmith said knife makers and artists from around Australia would be at the event, as well as a leading artist from San Francisco.

“There’s definitely been a resurgence* in blacksmithing particularly from the art side and so the festival will really showcase that,” Mr Phillips said.

The festival will run the weekend of May 13-14 at the Blacksmith sheds at 60 Maribyrnong St, Footscray.

resurgence: return to how it was

In the past what important objects did blacksmiths make?

Why did this trade ‘die out’?

What do present day blacksmiths create?

Create an A5 sized advertisement for this event.

Read the article carefully to include all relevant information.

Find out more about the blacksmith trade.

Use the internet or books from your school library to find out about some of the basic methods blacksmiths use when working with metal and some of the tools they use.

What protective clothing do they wear?

Present the information in a A4 poster with the subheadings Tools, Methods,

Extension: Would you be a blacksmith?

After finding out more about what it takes to be a blacksmith, is this a career you would consider?

Remember that blacksmiths in the present day create lots of art.

Would blacksmithing be for you?

Answer in a short paragraph.

In this article about the Waterside Blacksmithing Metal Art Festival, metal is described as red hot.

Brainstorm as many things as you can that could be described in this way.

Use the information in the article to create a poster advertising the event.

Be sure to include the important details, as well as some attractions to encourage people to attend.

APRIL IS ALL ABOUT ACTIVITY

LIGHTS OUT FOR EARTH HOUR

EYE SPY GRAFFITI, OR IS IT ART?