A photo of Australia’s “bat woman” Julie Malherbe caring for orphaned flying foxes — which are hanging upside down on the shirt she is wearing and on her clothes airer — is a finalist in this year’s Natural History Museum Wildlife Photographer of the Year People’s Choice Award.

The judges chose the 25 People’s Choice Award finalists from more than 49,000 entries. You can see all 25 photos and vote for the one you think should win at nhm.ac.uk/discover/wildlife-photographer-of-the-year-peoples-choice-2020

The winner will be announced in February 2021.

Here are a few we love, with their explanatory statements. Which is your favourite?

‘Turtle time machine’ by Thomas Peschak, Germany/South Africa (photo above)
“During Christopher Columbus’s Caribbean voyage of 1494, green sea turtles were said to be so numerous that his ships almost ran aground on them. Today the species is classified as endangered. However, at locations like Little Farmer’s Cay in the Bahamas, green turtles can be observed with ease. An ecotourism project run by fishermen (some who used to hunt turtles) uses shellfish scraps to attract the turtles to the dock. Without a time machine it is impossible to see the pristine* turtle population, but Thomas hopes that this image provides just a glimpse of the bounty* our seas once held.” ‘Bat woman’ by Douglas Gimesy, Australia (above)
“Wildlife rescuer and carer Julie Malherbe takes a call to assist the next animal rescue while looking after three recently orphaned grey-headed flying-foxes. This megabat is native to Australia and is endemic* to the southeastern forested areas, playing a vital role in seed dispersal* and the pollination of more than 100 native species of flowering and fruit-bearing trees. Sadly, the species is listed as vulnerable to extinction because of the destruction of foraging* and roosting habitats and, more frequently, mass die-offs caused by heat-stress events.” ‘Bushfire’ by Robert Irwin, Australia
“A fire line leaves a trail of destruction through woodland near the border of the Steve Irwin Wildlife Reserve in Cape York, Queensland, Australia. The area is of high conservation significance, with over 30 different ecosystems found there, and is home to many endangered species. The fires are one of the biggest threats to this precious habitat. Although natural fires or managed burns can be quite important in an ecosystem, when they are lit deliberately and without consideration, often to flush out feral pigs to hunt, they can rage out of control and have the potential to devastate huge areas.” 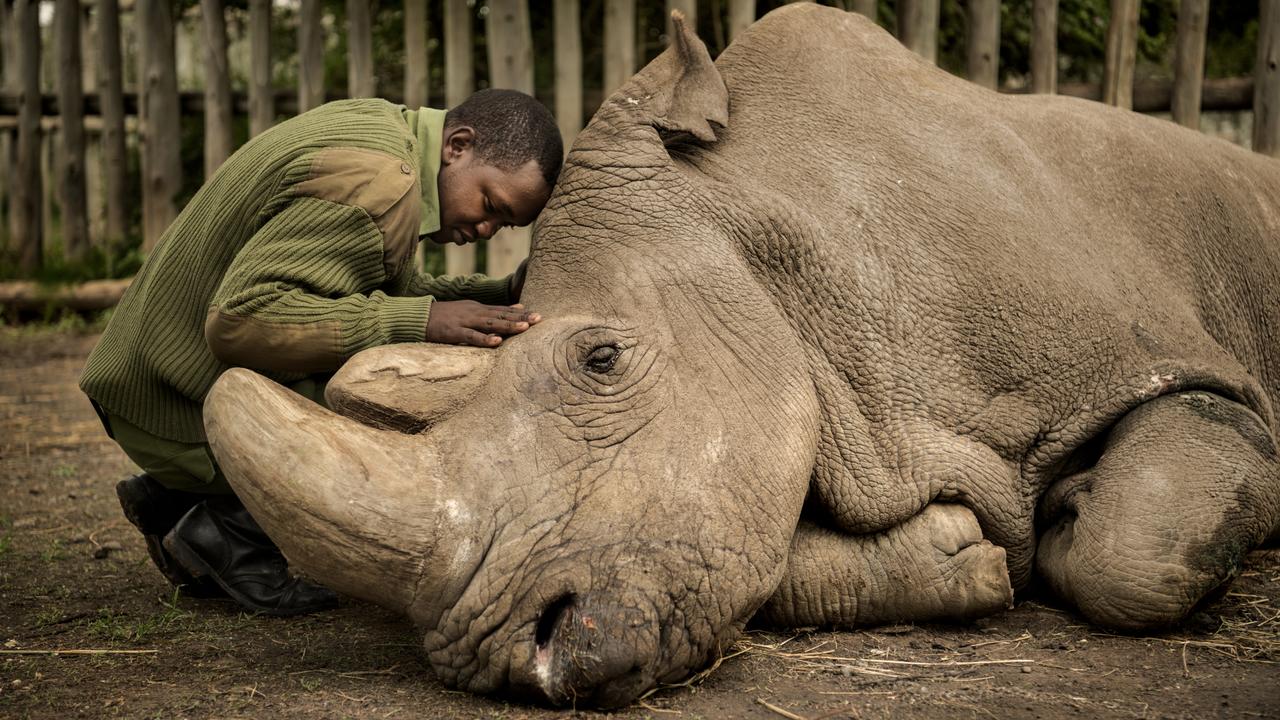 ‘The last goodbye’. Picture: Ami Vitale/Wildlife Photographer of the Year

‘The last goodbye’ by Ami Vitale, USA
“Joseph Wachira comforts Sudan, the last male northern white rhino left on the planet, moments before he passed away at Ol Pejeta Wildlife Conservancy in northern Kenya. Suffering from age-related complications, he died surrounded by the people who had cared for him. With every extinction we suffer more than loss of ecosystem health. When we see ourselves as part of nature, we understand that saving nature is really about saving ourselves. Ami’s hope is that Sudan’s legacy will serve as a catalyst* to awaken humanity to this reality.” 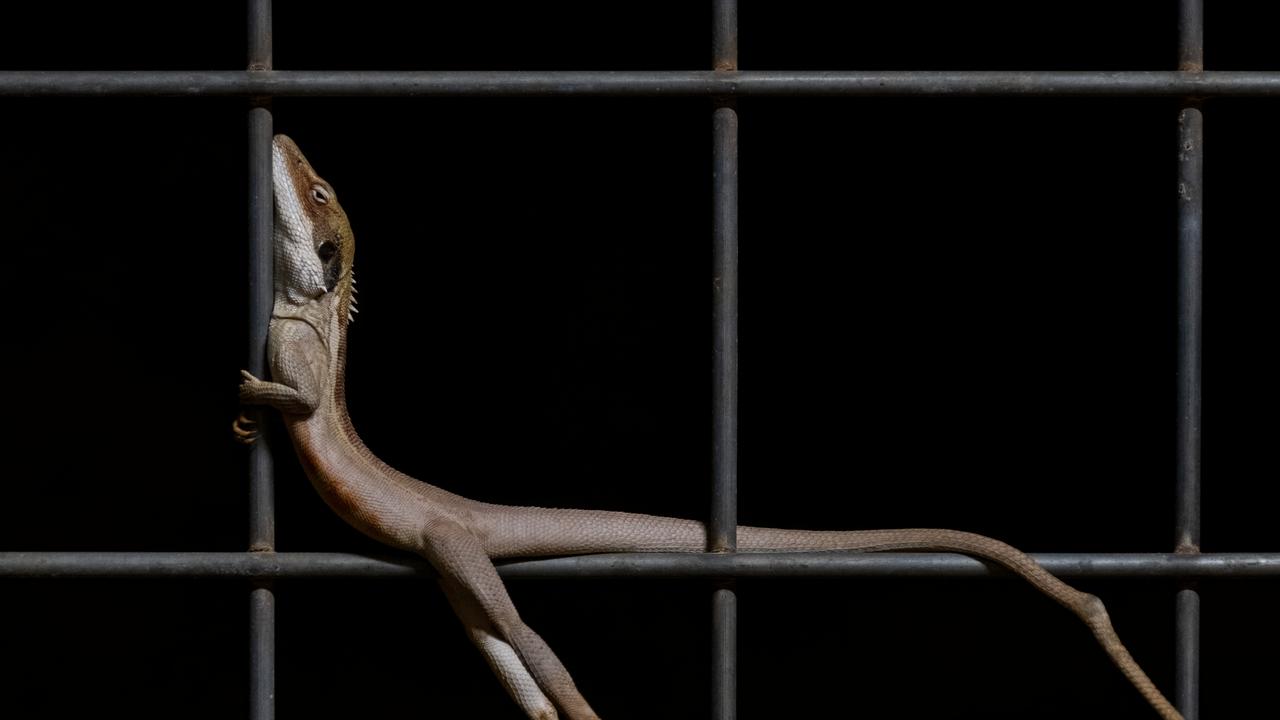 ‘Resting dragon’ by Gary Meredith, Australia
“The Great Sandy Desert in Western Australia is home to a wide variety of wildlife, which exists alongside man-made mining operations. The wildlife found in this environment needs to adapt to the harsh, hostile living conditions. When the opportunity arises, the long-nosed dragon makes use of human structures. This individual positioned itself on a piece of wire mesh outside a workshop, waiting for the sun’s rays. The artificial light source outside the building attracts moths and insects, easy prey for a hungry lizard.” ‘Close encounter’ by Guillermo Esteves, USA
“The worried-looking expression on this dog’s face speaks volumes* and is a reminder that moose are large, unpredictable, wild animals. Guillermo was photographing moose on the side of the road at Antelope Flats in Grand Teton National Park, Wyoming, USA, when this large bull took an interest in the furry visitor – the driver of the car unable to move it before the moose made its approach. Luckily, the moose lost interest and went on its way after a few moments.” 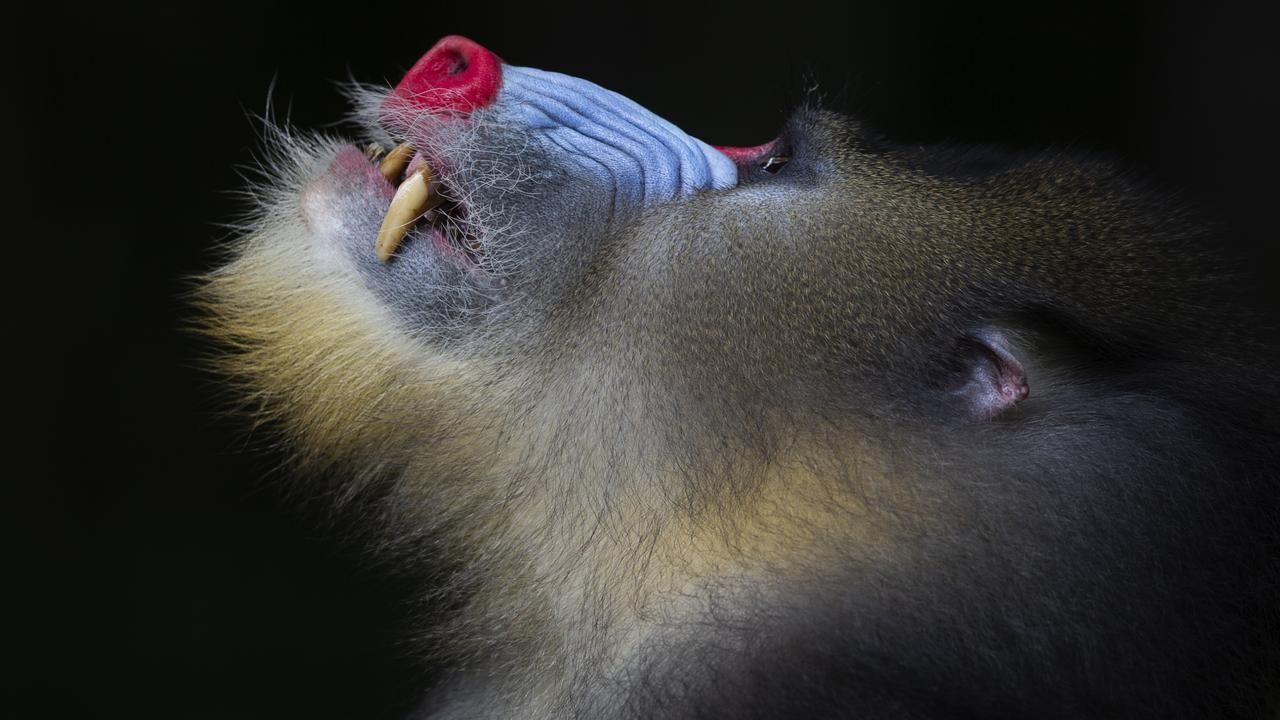 ‘The alpha’. Picture: Mogens Trolle/Wildlife Photographer of the Year

‘The alpha’ by Mogens Trolle, Denmark
“Of all the different primate species Mogens has photographed, the mandrill has proved the most difficult to reach, preferring to hide in tropical forests in remote parts of Central Africa. This made the experience of sitting next to this impressive alpha, as he observed his troop above, even more special. When a male becomes alpha, he undergoes physical changes that accompany a rise in testosterone* levels, and this results in the colours on his snout becoming much brighter. With the loss of status, the colours fade. Mogens used a flash to enhance the vivid colours and textures against the dark forest background.” ‘Coexistence’ by Pallavi Prasad Laveti, India
“A cheeky Asian palm civet kitten peeps from a bag in a small remote village in India, curiosity and playfulness shining in its eyes. This baby was orphaned and has lived its short life in the village backyard – comfortable in the company of locals, who have adopted the philosophy of ‘live and let live’. Pallavi sees the image as one of hope, for in other parts of the world the civets are trapped for Kopi Luwak coffee production (coffee made from coffee beans that are partially digested and then pooped out by the civet) – where they are contained in tiny, unsanitary battery cages and force-fed a restricted diet of coffee beans. She feels this image portrays a true essence of cohabitation*.” ‘Drey dreaming’ by Neil Anderson, UK
“As the weather grew colder, two Eurasian red squirrels (only one is clearly visible) found comfort and warmth in a box Neil had put up in one of the pine trees near his home in the Scottish Highlands. In the colder months, it’s common for the squirrels, even when unrelated, to share dreys*. After discovering the box full of nesting material and in frequent use, Neil installed a camera and LED light with a diffuser on a dimmer. The box had a lot of natural light so he slowly increased the light to highlight his subjects – and using the WiFi app on his phone he was able to take stills from the ground.” 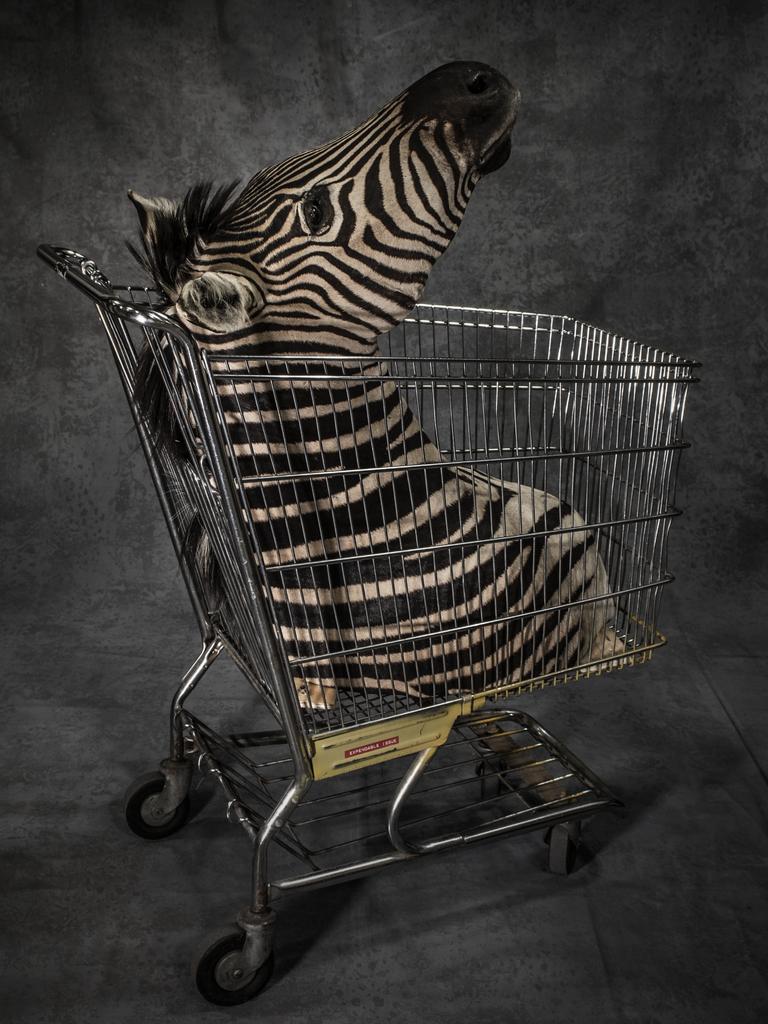 ‘Licence to kill’. Picture: Britta Jaschinski/Wildlife Photographer of the Year

‘Licence to kill’ by Britta Jaschinski, Germany
“Britta’s photographs of items seized at airports and borders across the globe are a quest to understand why some individuals continue to demand wildlife products, even if this causes suffering and, in some cases, pushes species to the brink of extinction. This zebra head was confiscated* at a border point in the USA. Most likely, the hunter was not able to show proof that the zebra was killed with a license. Britta found the use of a shopping trolley to move the confiscated item ironic*, posing the question: wildlife or commodity*?” ‘Eye to eye’. Picture: Andrey Shpatak/Wildlife Photographer of the Year

‘Eye to eye’ by Andrey Shpatak, Russia
“This Japanese warbonnet was photographed in the north of the Gulf of Oprichnik in the Sea of Japan. These unusual fish lead a territorial lifestyle among the stones and rocks of shallow coastal waters. They use their sharp-edged jaws to snap off sea cucumbers and gastropods*. They were once thought to be timid and almost impossible to observe, but curiosity has taken over and they will now often swim right up to divers, who are usually startled by their extraordinary appearance.”

The most amazing wildlife photos of the year

Ball of cuteness and other winning wildlife photos

CLASSROOM ACTIVITIES
1. Power of a Photo
Photographs can be very powerful and can be an effective way to convey a strong message. Look at the 11 photos detailed in the Kids News article that are finalists in the Wildlife Photographer of the Year People’s Choice Award.

In the table below, write the subject in the photo (eg. Zebra) and what feelings or emotions you feel when taking the first look at the photo. Read the statements about the photo and add any more feelings it evokes* in you. 2. Extension
The ‘License to Kill’ photo sends a very emotional message on killing wildlife to use their products. What laws do you think should be put in place to protect our wildlife species from becoming extinct?

HAVE YOUR SAY: Which photo would you vote for? Why?
No one-word answers. Use full sentences to explain your thinking. No comments will be published until approved by editors.