After a daring robbery and rescue, Dorothy’s ruby slippers from the Wizard of Oz are safe 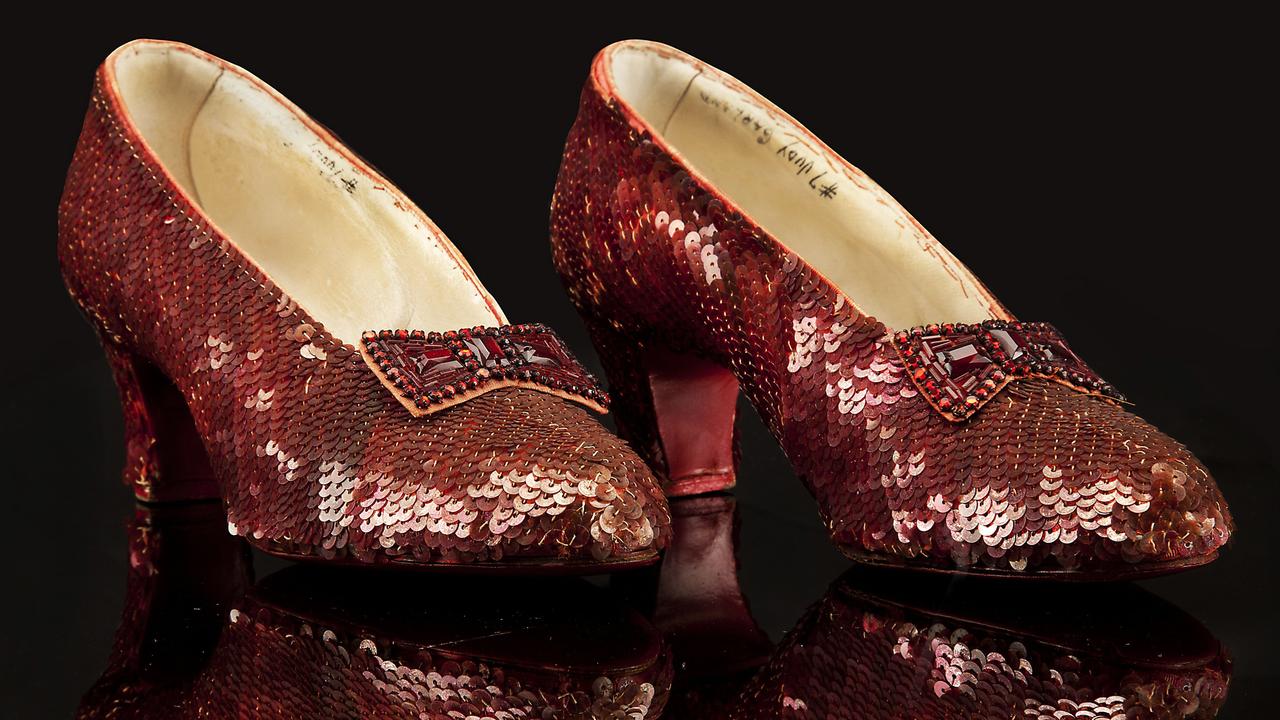 Dorothy’s ruby slippers have been found after being stolen 13 years ago. Picture: AFP

Dorothy’s sequined ruby slippers from the Wizard of Oz have been seized* and saved after being stolen in a daring* robbery 13 years ago.

The FBI, the US government security and detective organisation, set up what’s called a sting to get back the pair of slippers worn by actor Judy Garland in the 1939 film. A sting is a special operation where detectives catch someone in the act of committing a crime.

The slippers were stolen from the Judy Garland Museum in Ms Garland’s home town of Grand Rapids, Minnesota, US, in August 2005 by someone who climbed through a window and broke their display case. Bert Lahr as the Cowardly Lion, Ray Bolger as the Scarecrow, Judy Garland as Dorothy, and Jack Haley as the Tin Woodman in the Wizard of Oz.

The FBI says a man contacted the insurance company about a year ago and said he had information about how the shoes could be returned. The man was trying to get the slippers’ owner to pay him money to give the slippers back, which is a crime called extortion. The FBI set up a sting operation and recovered the slippers.

The slippers’ authenticity* was checked by comparing them with another pair at the Smithsonian’s American history museum in the US capital city, Washington, DC. The recovered shoes were checked against these ones, which are at the Smithsonian Museum of American History in Washington, DC, US, to make sure they were authentic. Picture: AFP

Four pairs of ruby slippers worn by Ms Garland in the movie are known to exist. The shoes are made from about a dozen* different materials, including wood pulp, silk thread, gelatine, plastic and glass. Most of the ruby colour comes from sequins, but the bows of the shoes contain red glass beads. A scene from the Wizard of Oz.

The Wizard of Oz is a loved and groundbreaking* film. It was filmed in black and white and early colour film, with some parts coloured by handpainting on the film. It was a huge success and won multiple American Academy Awards, including the Oscars* for best picture and best cinematography*. Actor Judy Garland as Dorothy with Toto in a scene from the film.

Ms Garland, who was born Frances Gumm, died in 1969. The Judy Garland Museum, which opened in 1975 in the house where she lived, has the world’s largest collection of Judy Garland and Wizard of Oz memorabilia*.

The FBI said several people are suspected of being involved in the case and the investigation continues. A scene from the Wizard of Oz. Some parts of the movie were filmed in black and white, some in colour and some were hand-coloured.

CLASSROOM ACTIVITIES
1. Wanted poster
Imagine you worked at this museum when the shoes first went missing.

Create a WANTED sign for these ruby slippers. Include:

2. Extension
Use details from this news article to turn it into a report suitable for television or radio news. Include the facts from the article about the robbery, how the shoes were recovered and the significance of the shoes. Try to keep your news report to between one minute and one-and-a-half minutes long. Practice reading your report using expression to create interest from your audience. When you are happy with your report, perform it or record it and play it to your class.