An elephant famous for being the ‘world’s loneliest’ will be allowed to leave his Pakistani zoo for a better home, the animal welfare group helping with the case said.

Kaavan has lived at a zoo in the Pakistan capital of Islamabad in terrible conditions for more than 35 years.

Martin Bauer, a spokesman for animal rights organisation Four Paws, said the elephant has been finally given medical approval to travel, most likely to Cambodia, where he will find companionship and better conditions. 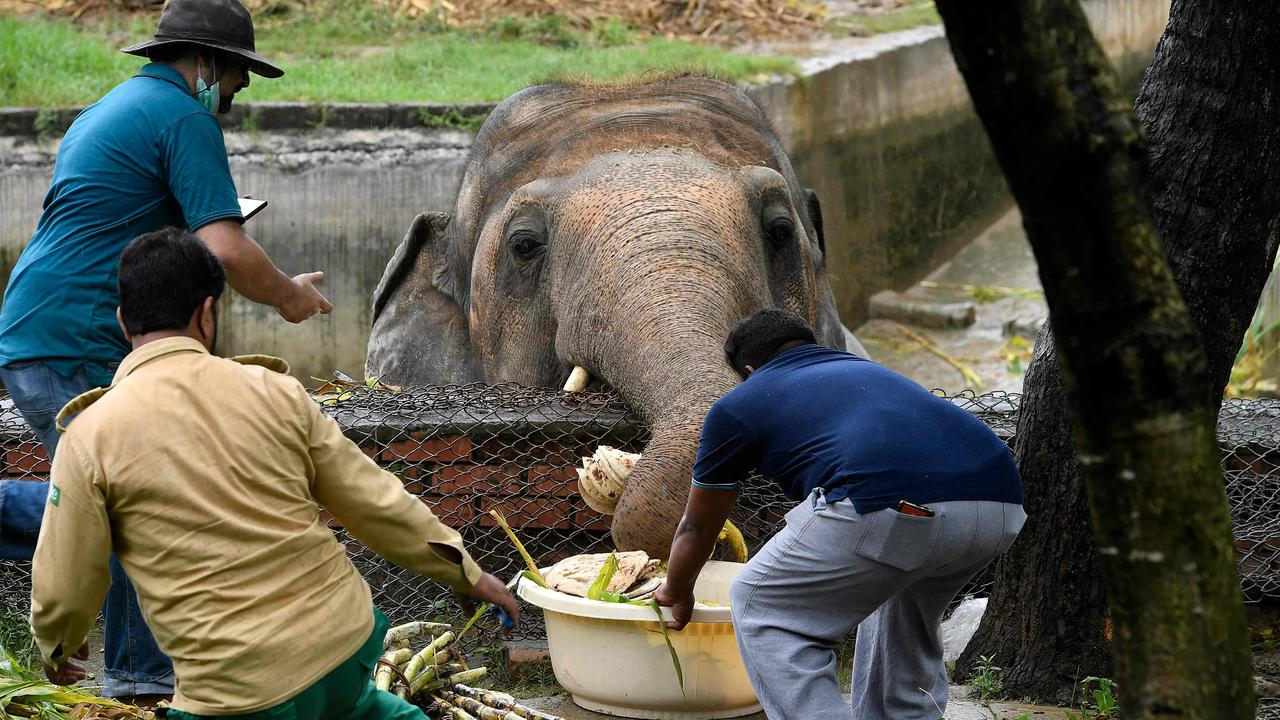 In May, Pakistan’s High Court ordered the Marghazar Zoo closed because of its extremely bad conditions.

Rescuing Kaavan from the zoo attracted the attention of animal activists* around the world, who have fought for his relocation since 2016.

“Unfortunately, the rescue comes too late for two lions that died during an attempted transfer at the end of July after local animal handlers set a fire in their enclosure to force them into their transport crates,” Mr Bauer said in a statement released on Saturday.

He said Four Paws was invited by the Islamabad Wildlife Management Board to safely transfer the remaining animals in the zoo. Kaavan has until now been forced to live a solitary* life in a small enclosure.

Friday’s medical examination showed the elephant was overweight, even as he showed signs of malnutrition*. His nails were cracked and overgrown apparently from years of living in an improper* enclosure with flooring that damaged his feet.

“Following the checks, which confirmed Kaavan is strong enough, steps will now be taken to finalise his relocation to an animal sanctuary potentially in Cambodia,” Mr Bauer said.

His recovery will be a long one, said Mr Bauer, adding that Kaavan’s wounds are more than just physical. He also suffers behavioural issues.

Kaavan, who lost his partner in 2012, has battled loneliness as well as poor living conditions. Both have taken their toll.

“He also developed stereotypical* behaviour, which means he shakes his head back and forth for hours. This is mainly because he is simply bored,” said Mr Bauer.

The Four Paws team that carried out Kaavan’s physical included wildlife vets and other experts.

It’s not yet known when Kaavan would be able to travel. 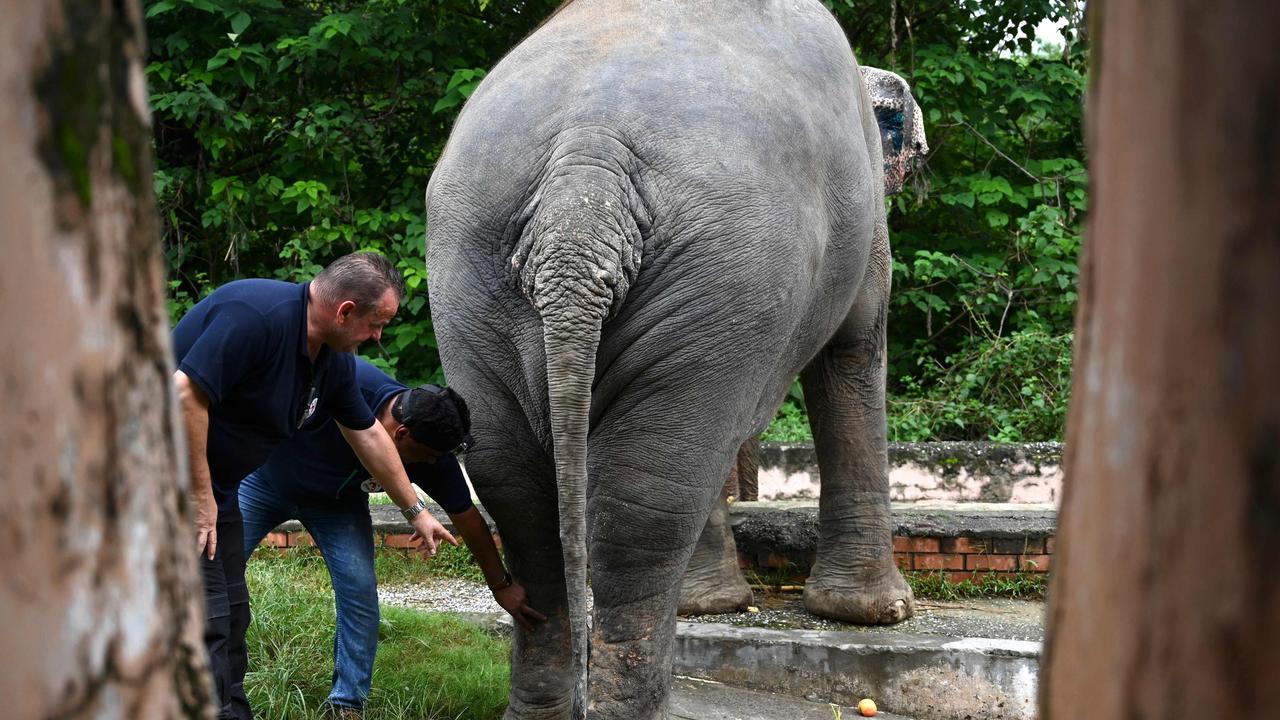 Vets of Four Paws International examine Kaavan, who is overweight but malnourished, has badly cared-for feet and his boredom and loneliness shows in his behaviour. Picture: AFP

SINGING TO KAAVAN
One of the vets who has been with Kaavan in recent days has been singing to him to help calm him down.

Amir Khalil, a vet who has worked in war zones to rescue animals, is now in Islamabad with Four Paws and has been assessing whether Kaavan is well enough to travel.

“When we arrived 10 days ago … I started to train him and to sing to him and he accommodated* me so we have a relationship,” Dr Khalil said.

He chose to sing a song made famous by Frank Sinatra called “My Way”.

But even with a smooth song, it wasn’t easy or safe handling Kaavan without making him very stressed, so vets fired darts that had a sedative* drug in them to make him sleepy.

After Kaavan woke up, he ate some apples. Elephant Kaavan takes a bath at the Marghazar Zoo in Islamabad, Pakistan on July 18, 2020. Picture: AFP

Wild beasts come out to play as humans stay in

CLASSROOM ACTIVITIES
1. Design a ‘Five Star’ enclosure
Kaavan is an Asian elephant. He has had many years living in poor conditions which have affected his health and well-being.

Use the internet to find out some information about the natural habitat for Asian elephants and their natural diet.

Use this information to help you design a ‘5-star’ enclosure that as close as possible resembles the natural habitat of the Asian elephants. Cost is no barrier in your design and neither is space. If you had no limit of budget and no limit of space – what would you include in an enclosure. Make sure you still have places for vets to observe, care for and treat Kaavan.

Draw a ‘bird’s eye view’ of the enclosure, labelling the features that make this enclosure perfect for Kaavan.

2.Extension
Kaavan is about to have a big move and some big changes in his life. Although this move is to a better home than where he is living, it will still take some getting used to and may be scary for him until he is used to it.

One way we prepare young children for big changes in their life is to write a ‘story’ about what they can expect. For example, when we start school we might write a storybook that has pictures of the new school, and their teacher and explain what they will do at school and why they are going.

Write a story that the keepers can read to Kaavan to help prepare him for the big move. Explain why these changes will be good for him. Include pictures to show him what it might look like.

In your book include:

HAVE YOUR SAY: Describe how you feel about Kaavan’s life and future.
No one-word answers. Use full sentences to explain your thinking. No comments will be published until approved by editors.