A 300kg stingray is the biggest freshwater fish ever caught anywhere in the world. It was accidentally caught by Cambodian fisherman in the Mekong River in the Stung Treng province. Picture: Reuters

The world’s largest recorded freshwater fish, a giant stingray measuring in at 4m from snout to tail and weighing 300kg, has been caught by Cambodian fishermen in the Mekong River.

The female stingray, one of southeast Asia’s largest and rarest species of fish, was caught by accident in Stung Treng province when it swallowed a smaller fish that had taken a baited hook.

An international team of experts on the US-funded Wonders of the Mekong project worked with the fishermen to unhook the ray before weighing and measuring it and returning it unharmed to the river.

The previous record for a freshwater fish was a 293kg Mekong giant catfish, caught in Thailand in 2005.

Record-Setting Stingray Discovered and Returned to Mekong River in Cambodia

The stingray was nicknamed Boramy, meaning “full moon” in Khmer, the native language of Cambodia.

It was fitted with an electronic tag before its release back into the river to allow scientists to monitor its movements and behaviours. 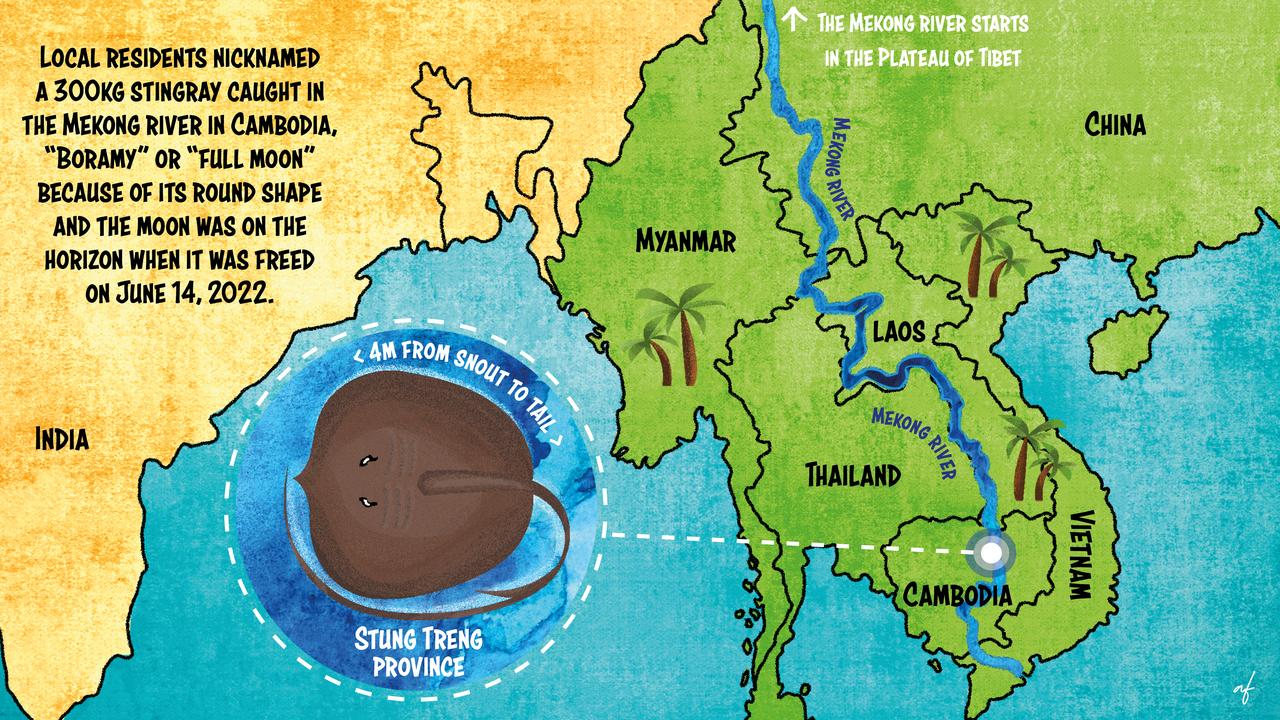 This map shows the area in the Stung Treng province in Cambodia where the stingray was caught and also where the Mekong River flows through southeast Asia. Picture: Abi Fraser

The giant Mekong River is a crucial* habitat for a vast array of species large and small, but project leader Zeb Hogan, a fish biologist* from the University of Nevada in the US, said the river’s underwater ecosystem* was poorly understood.

“They are unseen worlds, underappreciated* and out of sight,” he said.

More than 1000 fish species call the Mekong home and the stingray is not the only giant lurking in the muddy waters – the giant catfish and giant barb also reach up to 3m long and 270kg in weight. The giant stingray is prepared for its release back into the Mekong River in Cambodia’s Stung Treng province. Picture: AFP

The study group said in a statement that the remote location where the ray was caught had pools up to 80m deep and could harbour even bigger specimens.

But they also warned that underwater video footage showed plastic waste even in the deepest stretches of the Mekong, along with “ghost nets”, which are fishing nets abandoned by fishermen but that are still able to snare fish.

The famous waterway starts in China and twists south through parts of Thailand, Laos, Myanmar, Cambodia and Vietnam, feeding 60 million people through its basin* and tributaries*.

CLASSROOM ACTIVITIES
1. What do you think?
Why do you think it was more important for Boramy to be carefully returned to the water, instead of being taken to an aquarium? Write as many reasons that you can think of.

2. Extension
“Unseen worlds”. What do you think is in the depths of a river like the Mekong River? Draw or write a detailed description. Use information in the story for ideas.

VCOP ACTIVITY
The Mekong giants need help
The Mekong River is home to some of the largest fish in the world, but underwater cameras show that along with over 1000 species of fish, there is also an abundance of plastic pollution threatening the waterways.

See if you can come up with three ideas for cleaning up the river, without affecting the fish.