After what’s believed to be thousands of years, there are once again wild Tasmanian devils living on the mainland of Australia.

A total of 26 devils have so far been reintroduced to the wild in the Barrington Tops National Park north of Newcastle, NSW.

The latest batch of 11 was introduced to a 400ha wildlife sanctuary in the park on September 10, joining the 15 introduced in July.

The sanctuary gives the endangered devils space to roam* and freedom to adjust to the wild, while also protecting other animals in the area, and allowing conservationists from animal conservation group Aussie Ark to monitor* their progress in the lead up to the 2021 breeding season.

The devils have been fitted with radio collars and there are cameras covering the sanctuary for monitoring.

Tasmanian devils are thought to have disappeared from the mainland around 3000 years ago, hunted to a degree* by Aboriginal people at the time but also impacted by the introduction of the dingo, thought to have arrived in Australia — possibly helped by Indonesian seafarers* — around 3500 years ago.

Dingoes never made it to Tasmania. However, a contagious cancer is now threatening the Tasmanian devil population.

Tasmanian devil facial tumour* disease (DFTD) spreads through bites and causes large tumours on the face and mouth of the animals.

According to Tasmania’s environment department, cancerous devils usually die within a few months of showing symptoms.

The disease has caused a massive decline in the Tasmanian devil population, and the species is now considered endangered.

It’s hoped that a backup population can be maintained on the mainland, free of the contagious cancer, in case Tasmania’s existing devil population succumbs* to the disease. A Tasmanian devil in the wild in NSW. Rewilding the species on the mainland is part of a plan to establish an insurance population, as devils in Tasmania battle a contagious cancer. Picture: AFP/Aussie Ark

Some of them have been returned to Tasmania while others have been or will be introduced to the mainland. 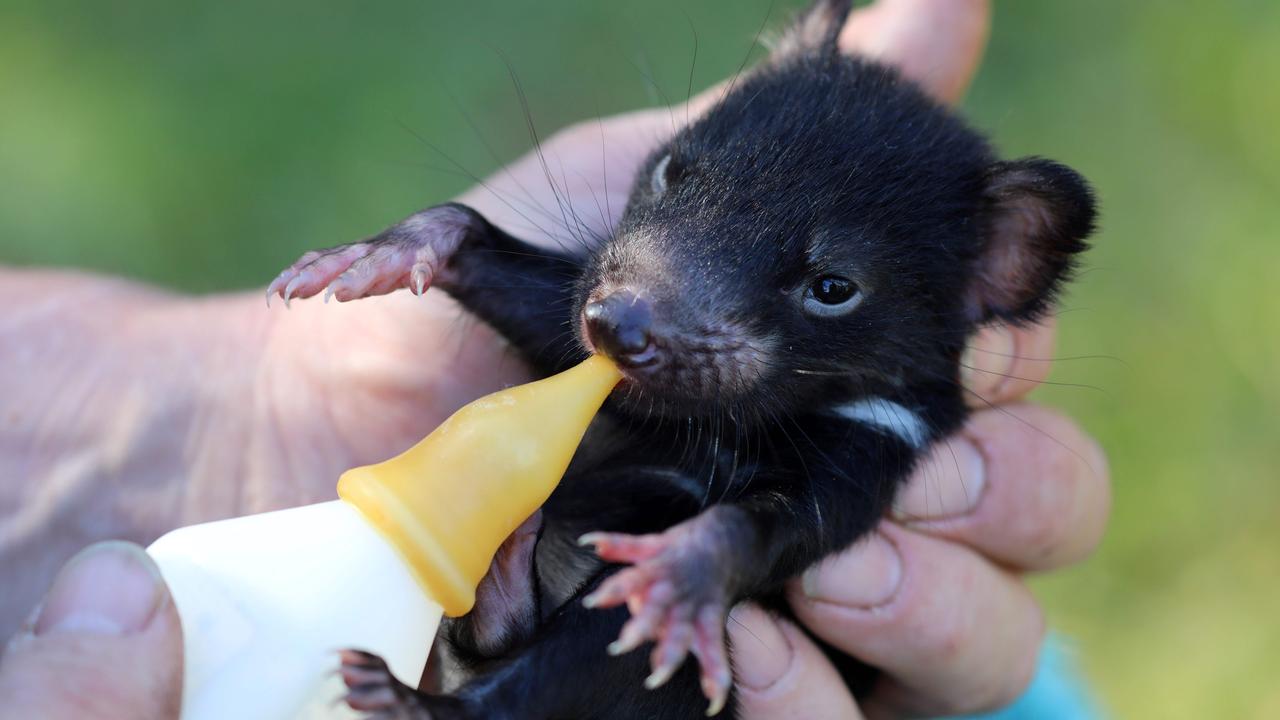 The process of reintroducing animals to areas in which they were previously endemic* is known as “rewilding” and has been steadily gaining interest around the world following the successful return of wolves to Yellowstone National Park in the US in 1995.

Tasmanian devils introduced to the wild by Aussie Ark

CLASSROOM ACTIVITIES
1. Write a ‘pep talk’
Pretend you are one of the conservationists involved in the release of these Tasmanian devils to the wild on mainland Australia.

You are giving the Tasmanian devils a last-minute ‘pep talk’ about what is about to happen and why it is happening. Read through the article to find out the background of how and why this release of Tassie devils is taking place and what role they play in the survival of their species.

Write a script for a short ‘pep talk’ you might give to them before they are released. You want to encourage them to embrace their new environment and empower them to be ambassadors for their species as they learn to live in the sanctuary. You also want to reassure them that they will be able to survive in their new environment and that they will have the backup support of Aussie Ark to keep an eye on their progress.

2. Extension
What information would Aussie Ark need to know about Tasmanian devils to ensure that these animals survive in their new environment and don’t pose too much threat to the other animals in the sanctuary?

Write a list of things conservationists would need to know to make this project a success and why this information is important.

For example: What their natural diet is and how do they collect their food? There needs to be an adequate supply of their natural food in the sanctuary. They need to know if the devils hunt or forage for food and if they will be a threat to other animals in the area.

VCOP ACTIVITY
Tasmanian devil or Australian Devil?
With the Tasmanian devil population now being introduced back on to mainland Australia, does that mean we need to rename them as well?

Write a persuasive argument convincing your audience to either rethink the name, or leave it as is. Remember to explain your reasons and use emotive language to get your audience to feel what you feel.

HAVE YOUR SAY: Do you think this rewilding will help save the devils? Why or why not?
No one-word answers. Use full sentences to explain your thinking. No comments will be published until approved by editors.