Whale of a time spreads joy 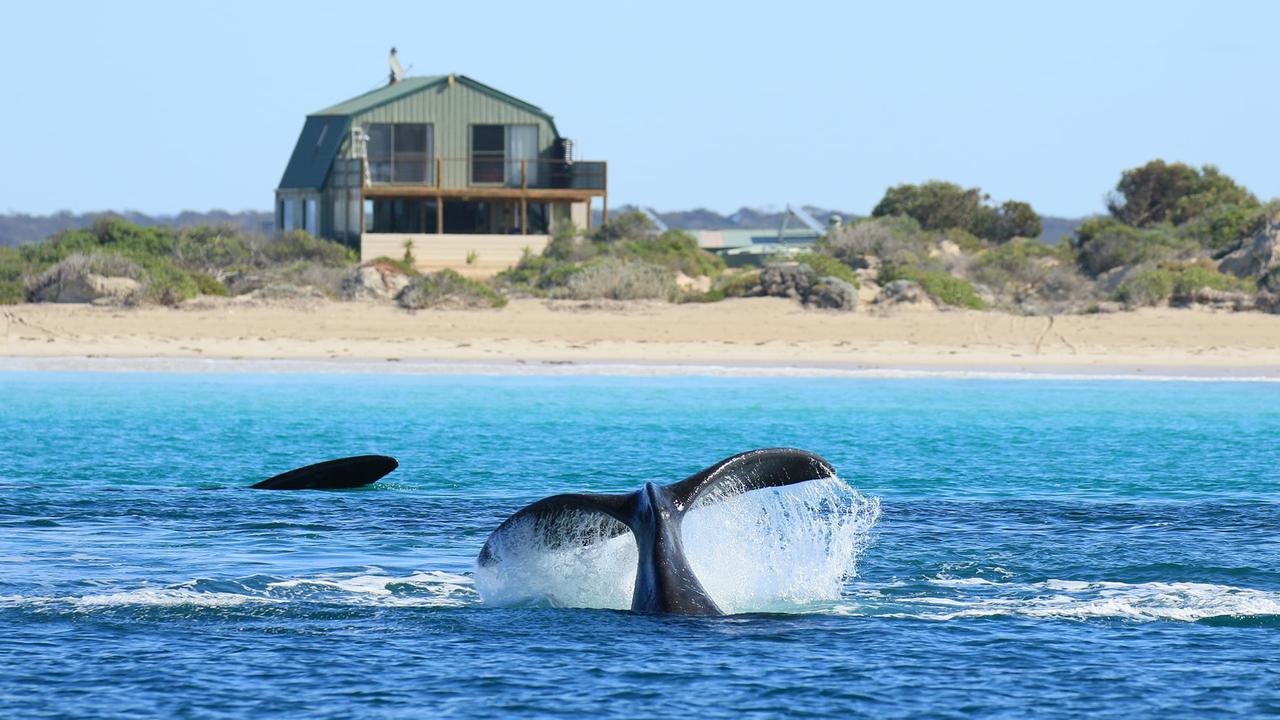 Southern right whales – seen here in Fowlers Bay in the Great Australian Bight – have been among the only tourists in coastal NSW this winter as the state's lengthy lockdown continues. Picture: EP Cruises, Fowlers Bay Whale Tours.

It is a sight guaranteed to lift everyone’s spirits — the spectacular migration* of southern right whale calves and their “very protective” mothers.

People living on the eastern coast of Australia are used to seeing the annual migration of humpback whales, but these majestic* southern right whales have also been spotted over the past two months. Some have even cruised into beaches and inlets, to the delight of lucky locals.

While Australia’s southern right whale population is usually concentrated on the southern coastline of the Great Australian Bight, taking in Western Australia, South Australia and Victoria, the beautiful creatures have ventured into NSW this winter. Southern right whales are more commonly found on Australia’s southern coastline in the Great Australian Bight. This one was photographed in Fowlers Bay between August 21-23. There are 20 mother and calf pairs in the area, the calving season is in full spring. Picture: EP Cruises, Fowlers Bay Whale Tours.

“We have counted five adults, two of which have calves, in NSW waters in the past two months,” said Jools Farrell, vice president of the Organisation for the Rescue and Research of Cetaceans* in Australia.

“It’s pretty rare for NSW to have such a large number sighted off our coast, especially those with calves.

“They are on the endangered* list, with about 270-275 around South Australia and Victoria.”

Around July 18 a single mother and calf were even spotted veering* a little off course, heading into the Hawkesbury River near Sydney’s Palm Beach.

Based on the NSW south coast, Maree Jackson saw the whales in multiple places over a week in August.

“They seem to like to bring their babies into shallow water and move towards rock formations,” Jackson said.

“They keep their babies close to the shore line. I think it’s protection rather than anything else.

“They are very different to the humpback whale. Humpbacks are further out to sea and allow their calves to be much more independent. Humpback mums will let their calves play around. They will also come up to breach.” The sight of humpback whales like this one, seen breaching off Sydney in July, is a glorious annual winter event, but this year southern right whales have been sighted as well. Picture: Jonas Liebschner/Whale Watching Sydney.

Adult southern right whales can weigh as much as four city buses (80 tonnes) and reach 18m in length, or one and a half buses. Adult females are generally one to two metres longer than males.

There is a boat distance limit of 100m from adult whales and 300m from calves, while swimmers can get within 30m. Drones – popular for getting aerial photographs of the whales – must stay 100m away.

“We are sorry people are in lockdown and cannot see them,” Jackson said. “Normally it’s amazing, the amount of people who look out for the whales during their migration.”

Southern right whales are monitored* annually at Head of Bight and Fowlers Bay, SA, by research scientists attached to the Great Australian Bight Right Whale Study (GABRWS). The researchers have found that southern right whales travel across widely separated coastal areas of between 200 and 1500 km within a season. The longest journeys are taken by non-calving whales, but calving whales have also been recorded at locations up to 700 km apart within a single season. Southern right whales have been spotted close to shore in multiple states this winter. These whales were spotted in Fowlers Bay on the Great Australian Bight between August 21-23. There are currently 20 mother and calf pairs in the area. Picture: EP Cruises, Fowlers Bay Whale Tours.

Listed as endangered since 2000, southern right whales are distinguishable by their black colour. They are large, baleen whales that do not have a dorsal fin, unlike most of their balaenopterid* cousins and they have a thick layer of blubber covering their bodies.

Whales migrate annually for feeding and breeding purposes. The federal Department of Agriculture, Water and the Environment said that the exact timing of the migration period varies from year to year “depending on water temperature, sea ice, predation risk, prey abundance and the location of their feeding ground.” The majority migrate from June to August before heading back towards the Southern Ocean and Antarctica from September to November.

CLASSROOM ACTIVITIES
1. Animals of all sizes
The news story helps us to better understand the size of southern right whales by giving their length in comparison to city buses. Show this visually by drawing a silhouette of a southern right below the silhouette of one and a half buses. Then, find out the length of four other animals of your choice and draw their silhouettes to scale below the whale.

Hint 1: your diagram will be most effective if you choose a selection of animals of varying sizes.

Hint 2: using a ruler and a scale of 1:100 (1cm to represent 1 metre) will help you keep your animals the right size in comparison to each other.

2. Extension
Research and display in a Venn diagram the similarities and differences between southern right whales and humpback whales.