Vote for the cutest baby animal Australia has some amazing animals — and their babies are amazingly cute.

To celebrate the launch of The Great Australian Wildlife Collection, Kids News took a peek inside the Baby Animals book.

We want you to tell us which baby you think is the cutest — and learn some fascinating facts about Australian wildlife along the way.

Vote for your cutest baby animal below. This Australian sea lion pup looks like he has a lot to say.

Female sea lions always return to the same breeding site where they were born, but males might mate with females from different colonies*.

During breeding season, male sea lions become aggressive* and territorial*, defending their group of females from other males.

At birth, pups are about 60-70cm and weigh about 6.5-8kg. Their coat starts out chocolate brown but is replaced by adult-like fawn coloured fur by the time they are two months old. 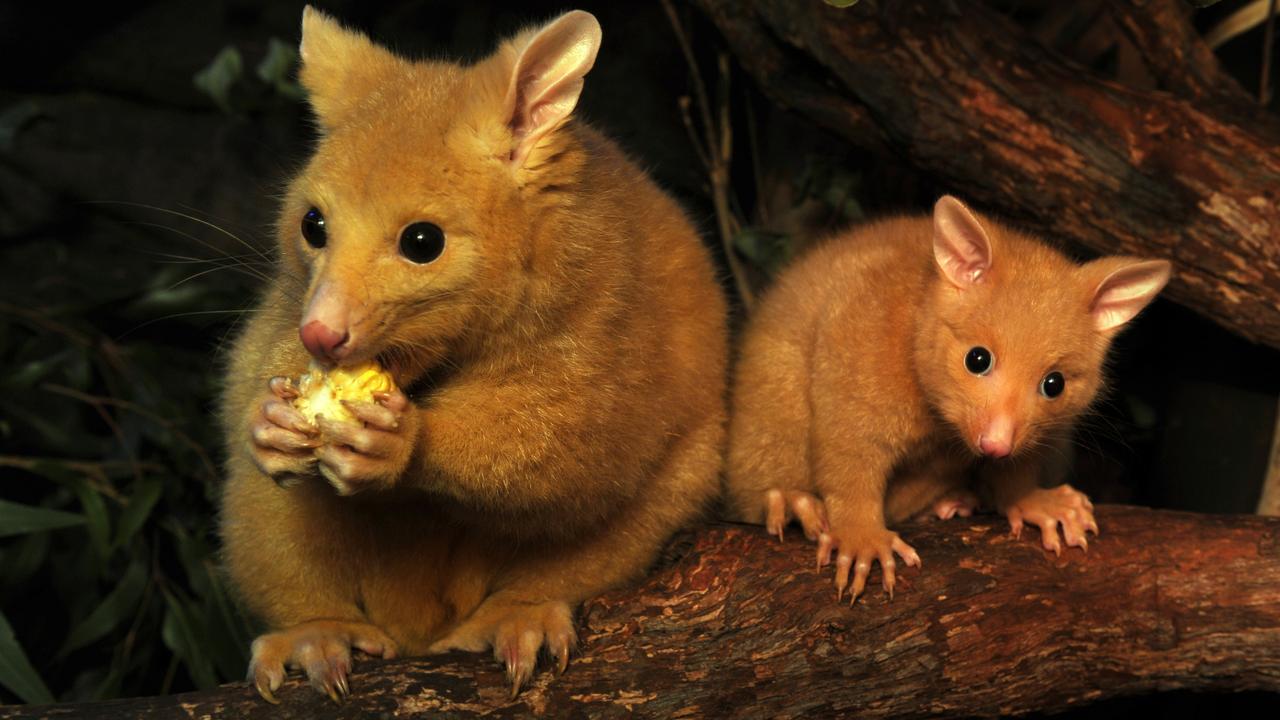 The common brushtail possum is a shy animal, only interacting with other possums during breeding season.

Females are pregnant for just 16 to 18 days and usually only give birth to one joey, however twins have been recorded.

A newborn is just 1.5cm long and weighs only 2g. Apart from its forelimbs, it is quite undeveloped.

The joey uses its front paws to make its way to its mother’s pouch, where it will continue to develop, remaining there for around four to five months. Dingo pups are taught how to hunt and survive by their pack.

Dingoes mate for life. Females can give birth to a litter of up to eight pups once a year.

Parents will travel long distances to find food for their young, and when the pups are older, they are introduced to the pack of up to 12 dingoes, which protect them and teach them

through play how to hunt and survive. Baby echidnas are called puggles and hatch from eggs after about 10 days. They then stay in their mother’s pouch for six to eight weeks. Picture: Getty Images

Echidnas are monotremes — egg-laying mammals — and produce just one egg a year.

An echidna baby, known as a puggle, hatches both hairless and blind after about 10 days, cracking through the shell with its “egg tooth”.

It stays in its mother’s pouch for six to eight weeks, suckling* on special glands called milk patches as the females don’t have teats.

When the puggle is too prickly to carry, the mother will dig a burrow for it before it’s weaned* at about seven months of age. Humpback whale calves are fed milk by their mother for about a year.

The newborn instinctively* swims to the surface within 10 seconds for its first breath, aided by its mother using her flippers.

Calves can grow half a metre each month while they are fed by their mother for almost a year.

This growth is aided by the high fat content of their mother’s milk, which they drink

about 600 litres of a day. The milk is said to be extremely thick and look a bit like toothpaste, which helps stop it from breaking apart in water if any escapes while the calf feeds. Female wombats have a pouch that is positioned backwards to protect the baby when it walks and digs. Picture: Getty Images

Female wombats give birth to one baby after about 22 days.

The joey then crawls into its mother’s pouch to continue to grow. But unlike most marsupials*, the pouch is positioned backwards.

This is to ensure the joey stays out of harm’s way when its mother is walking (or even at times sprinting) as their bodies are very low to the ground, or when burrowing so that dirt doesn’t collect in the pouch.

The joey remains in the pouch for another five to six months so important organs such as the brain, heart, kidney and lungs can develop.

They stay with their mother for about another 18 months after leaving the pouch. Joeys spend six months on their mother’s back after emerging from the pouch.

Baby koalas are called joeys and are born after 35 days.

The 2cm long newborn is able to make its way to the pouch without help, using its already well-developed senses of smell and touch and strong forelimbs and claws.

a substance called “pap”, which the mother produces in addition to milk.

Pap, a special form of droppings, is an important part of the joey’s diet because it helps them change from its mother’s milk to eucalyptus leaves.

At six months they emerge from the pouch and spend the next six months on their mother’s back. Male emus do all the child care after the female lays her eggs.

The male emu is the main caregiver when it comes to emu chicks.

Females lay between six and 11 eggs — which are about 13.5cm long and 9cm wide — before wandering off, showing no more interest in her chicks.

The male then incubates* the eggs without leaving the nest to drink or eat, surviving only on stored fat during this eight-week period.

Emu chicks are cream-coloured with dark brown stripes to help them camouflage*. They live with their father for up to 18 months while they learn how to find food and defend themselves from predators. A female flatback turtle lays about 50 eggs at a time, with the babies emerging 40 to 60 days later.

Their main nesting grounds are on Crab Island, an uninhabited* island off Cape York in Queensland.

The female lays about 50 eggs on the beach, burying them in the sand before returning to the water.

The turtles grow in the eggs for between 40 and 60 days before they emerge and make their way into the water themselves — however many of them are attacked by predators on land before they get there. A dusty scene, a kangaroo joey hangs from the pouch of the mother

Young kangaroos, known as joeys, are born at a very immature* stage when they’re only about 2cm long and weigh less than 1g.

Blind and hairless, they’re guided to their mother’s pouch where they spend about another eight months, drinking from one of her four teats.

The joey continues to suckle for three to four months after it has left the pouch.

Interestingly, a mother can nurse two joeys of different ages at once. She cleverly produces milk in one teat for her new joey in the pouch and another type of milk for the older joey who drinks from another teat.

These cuties feature in the Baby Animals book which is part of The Great Australian Wildlife Collection. News Corp Australia has partnered with Discovery Channel and Animal Planet to create the 15-book collection.

To celebrate the launch of the collection, anyone with an animal surname will be able to receive free entry at some of our best zoos and wildlife sanctuaries on Sunday, February 7, 2021. All you have to do is show identification like a driver’s licence with your animal surname. Entry is at the discretion of the venue and is only redeemable on Sunday, February 7, 2021 at Featherdale Sydney Wildlife Park (NSW), Healesville Sanctuary (Vic), Paradise Country (Qld) Bonorong Wildlife Sanctuary (Tas), Adelaide Zoo and Monarto Safari Park (SA) and Territory Wildlife Park (NT).

To celebrate the launch of the collection, anyone with an animal surname will be able to receive free entry at some of our best zoos and wildlife sanctuaries on Sunday, February 7, 2021. Identification showing your animal surname is required. Entry is at the discretion of the venue and is only redeemable on Sunday, February 7, 2021 at Featherdale Sydney Wildlife Park (NSW), Healesville Sanctuary (Vic), Paradise Country (Qld), Bonorong Wildlife Sanctuary (Tas), Adelaide Zoo and Monarto Safari Park (SA) and Territory Wildlife Park (NT). CLASSROOM ACTIVITIES
1. Baby Animal Names
Create a chart with three columns like the one below. Using the information from the Kids News article, fill out the information chart, stating the baby name for each animal and one other important fact. 2. Extension
Out of all these amazing animals, choose the one you find the most interesting. Write a paragraph with a slogan trying to persuade other people to vote for that animal as the cutest by outlining all your reasons.

HAVE YOUR SAY: What was the most interesting fact you learnt from this story?
No one-word answers. Use full sentences to explain your thinking. No comments will be published until approved by editors.