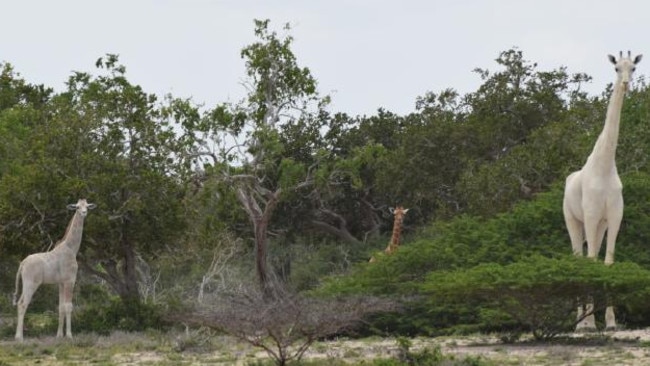 Two white giraffes have caused a stir after they were spotted in Kenya.

The mother and calf were first spied by locals in the African nation in June, with word quickly spreading about the tall, ghostly mammals.

In August, a team of conservationists managed to track the pair down near the Ishaqbini conservation park in Garissa, eastern Kenya.

“We hurriedly headed to the scene as soon as we got the news. And there, right in front of us, was the so hyped* ‘white giraffe’ of Ishaqbini conservancy!” a HCP blog reads.

Mum seemed aware that the unusual colouring of her calf and herself left them somewhat exposed.

“The mother kept pacing back and forth a few yards in front of us while signalling the baby giraffe to hide behind the bushes,” the HCP’s blog reports.

Soon the pair both slipped back into the bush.

But not before HCP’s conservationists had caught photographic and video evidence of their condition.

The rare giraffes are not albinos — a condition which strips all pigment* out of an animal’s skin and is recognisable through pink eyes.

Instead, they have a genetic condition called leucism.

Here, pigment remains in key parts of their body — such as the eyes and nose — but it is absent in skin and fur.

Leucism can affect other animals, including tigers, peacocks and crocodiles. CLASSROOM ACTIVITIES
1. Finding the white giraffes
Imagine you were a member of the conservation team sent to track down the white giraffes. Write a journal entry documenting your experience on the day that you found them.

Extension
Write down three new and interesting things you learnt from reading this news article.

Draw pictures of each of the mentioned animals in their natural environment.

Extension
Make a list of as many animals as you can that use camouflage.
Decide on some categories for your animals and sort them into these categories.

VCOP ACTIVITY
Ask me, ask me
Asking questions is a key to better understanding topics and generating discussion is the classroom.
Come up with a question about white giraffes for each of the following question openers.