This dramatic sequence of images shows two powerful male lions locked in a battle for supremacy* on the African plains.

The incredible fight took place earlier this year in the Maasai Mara National Reserve in Kenya.

In one photo, one lion appears to get the other in a headlock. In another, one of the predators is tackled to the ground.

Although the images show brutal scenes both of the males emerged* from the confrontation* mostly unhurt.

The Maasai Mara is an African wildlife haven* that boasts one of the world’s great concentrations of predatory big cats.

Retired scientist Steven Underwood captured the fight on camera. He was staying at the Kicheche Mara camp within the Maasai Mara.

The 60 year-old from the US said: “As a keen amateur* photographer, I am a frequent visitor to the Maasai Mara in Kenya for its unparalleled* photographic opportunities.

“One of the male lions was with a female of another pride. The second male approached in a threatening posture, and attacked the first.

“Although the two males were likely related, their competition for dominance over the females was intense. With teeth and claws exposed, their resulting fight was brief but ferocious.”

This story was first published in The Sun and was reproduced here with permission. 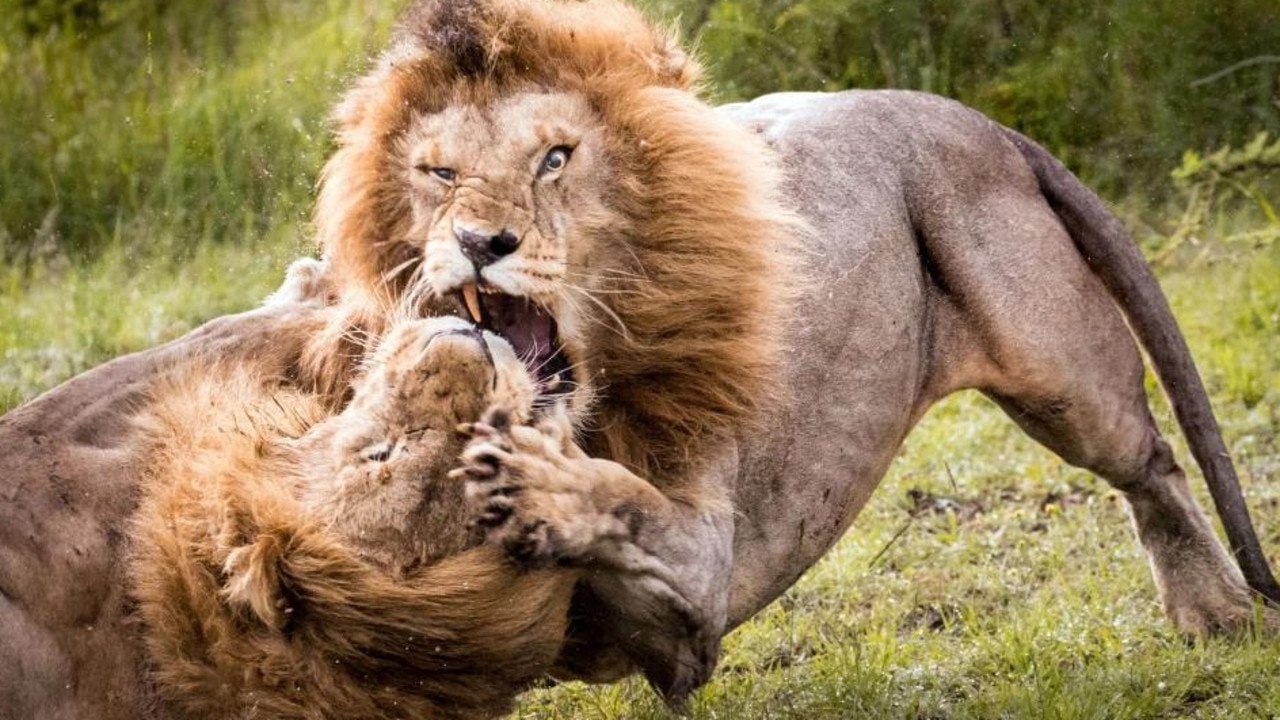 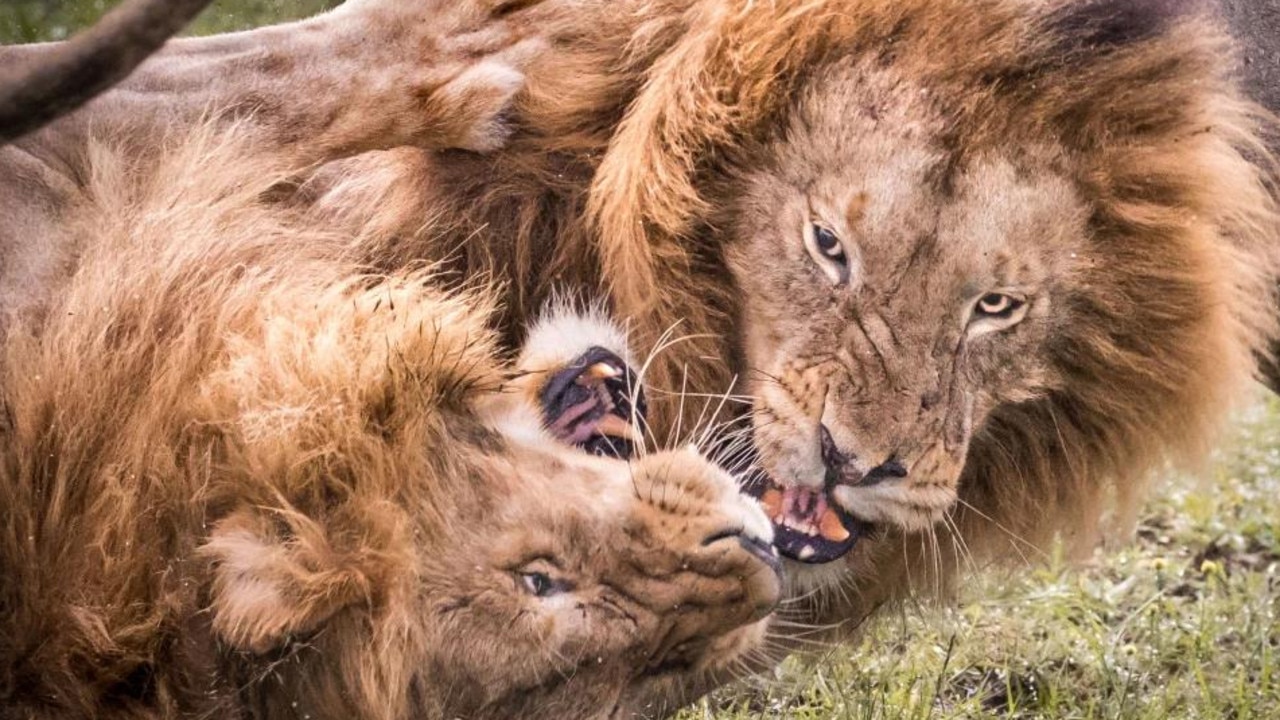 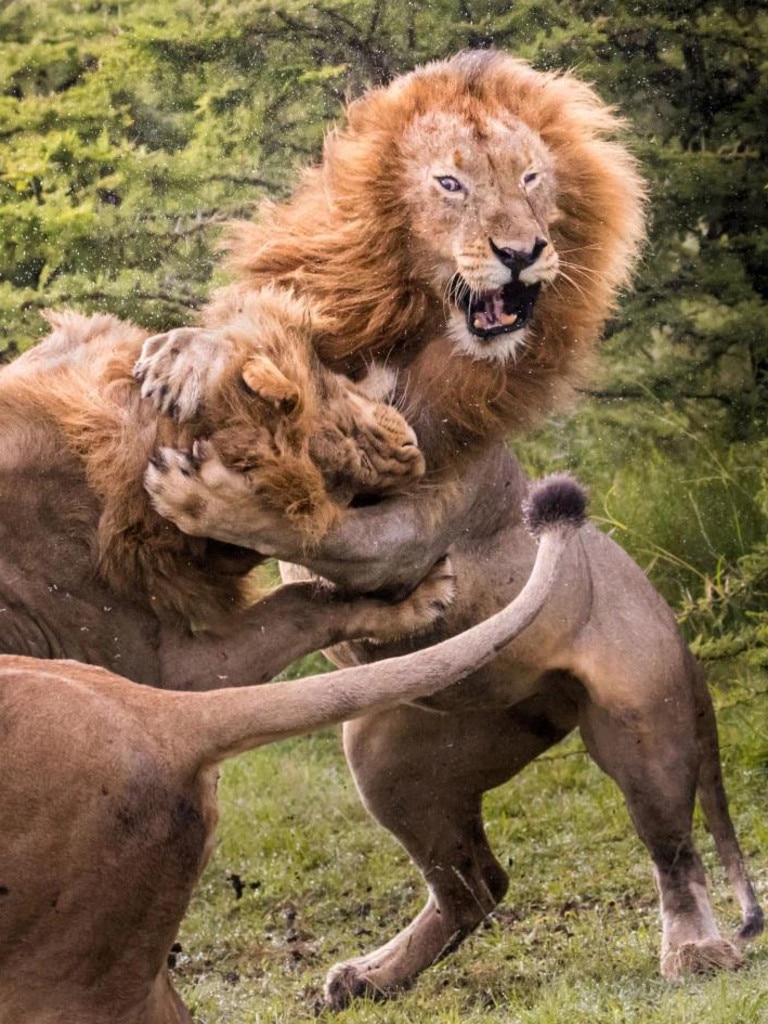 An adult male lion can grow to 3m long, including his tail. Picture: Stephen Underwood 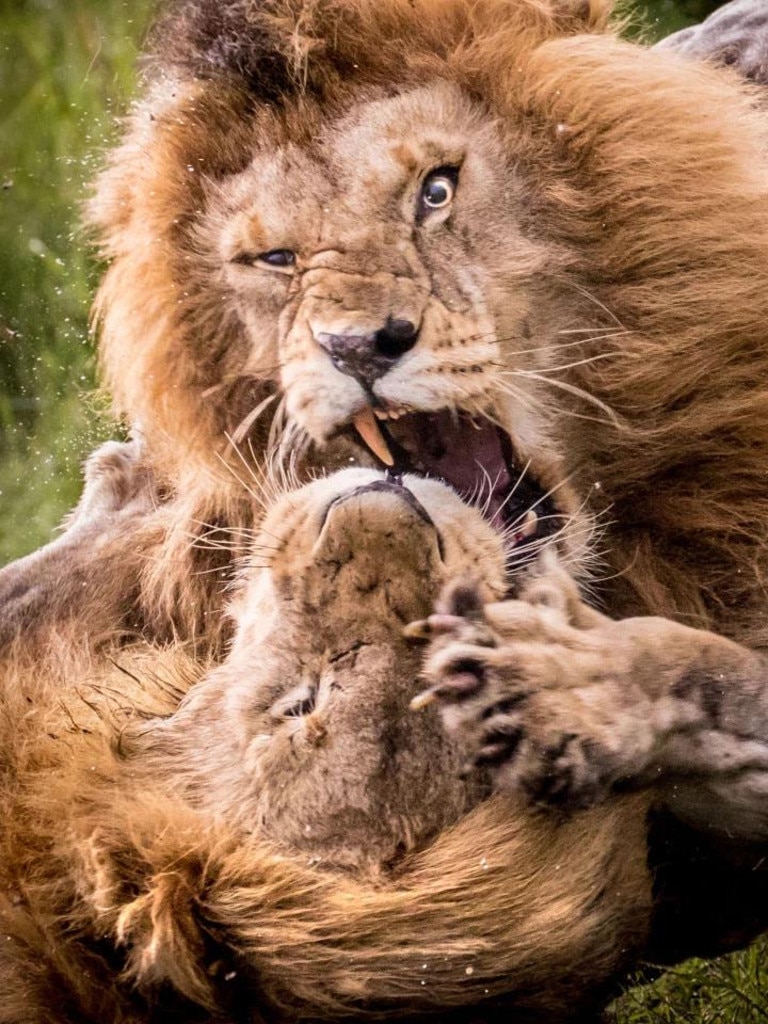 There may be 30-40 lions in a pride, but usually only one or two dominant males. Picture: Stephen Underwood When this adult male was a cub, it would have had spots, but these have faded over time. Picture: Stephen Underwood

An adult male lion is more than a metre tall, more than 3m long including his tail and weighs about 220kg. Females are much smaller.

Lion cubs have spots but most of these fade over time. A big male lion with a cub in the wild. Picture: Istock

These big mammals are listed as vulnerable to extinction.

Scientists estimate there are 16,000 to 30,000 surviving in the wild in sub-Saharan Africa and in a small, isolated population in the Gir Forest in India.

They once also lived across northern African, southwest Asia and Europe.

Their numbers are decreasing because numbers of animals they eat are also decreasing. They usually eat zebras, wildebeest, impala, warthogs and buffalo. Females do most of the hunting for food.

Farmers also kill them to protect their livestock.

Lions are the only cats to live in a big family group, which is called a pride. There can be 30-40 lions in a pride, mostly females and cubs, with a few males. There is usually just one male dominating the pride, or sometimes two brothers. Each dominant male lion is in charge for two or three years, before another male takes charge.
Source: Zoos Victoria

CLASSROOM ACTIVITIES
1. Could you be a lion?
Living as a lion would be very different to being a human. There could be some advantages and some disadvantages to being one of the largest and most ferocious cats on earth.

Do you think you would be happy as a lion? Use the information in the article and prior knowledge of lions to help you make a list of the ADVANTAGES and DISADVANTAGES of being a lion. You can be comical in your answers as well as serious.

2. Extension
Use the list from the above activity to help you decide if you’d rather be a human or a lion. Write a poem or paragraph that begins:

Give reasons for your choice. You can make your poem or paragraph funny or you can be more serious.

VCOP ACTIVITY
Family Feud
The article suggests the lions may be related. Is this what you look like when you fight with your brother, sister or cousin?

Imagine someone took a quick snap while you were in mid-argument, whether it be a screaming match, a tug of war over a toy or a wrestle.

Describe a recent argument with a family member, but pretend you are from the animal kingdom and someone is narrating the argument like on the nature channel. What would they say? What animals would you be? If they took a picture at the peak of the argument, what would it look like?

Have a bit of fun with it. Maybe you would like to draw your candid picture at the end of your description too.

HAVE YOUR SAY: Which is your favourite big cat species? What do you like about them?
No one-word answers. Use full sentences to explain your thinking. No comments will be published until approved by editors.