The Embrace by Sergey Gorshkov, taken in the Land of the Leopard National Park, in the Russian Far East. The population is threatened by poaching and logging, which also impacts their prey but recent camera-trap surveys are encouraging, the Natural History Museum says, indicating a population of between 500 and 600. Gorshkov installed his first proper camera trap to try to photograph a tiger in January 2019, and captured this winning image in the November. Picture: Sergey Gorshkov/Wildlife Photographer Of The Year 2020

This incredible image of a Siberian tiger, a species that has previously been “hunted to the verge of extinction”, has won the Wildlife Photographer Of The Year award for 2020.

Selected from more than 49,000 entries from around the world, Sergey Gorshkov’s photograph was praised as a “scene like no other” by judges of the annual Natural History Museum competition.

Titled The Embrace, it shows an Amur, or Siberian, tigress hugging an ancient Manchurian fir tree in the Russian Far East. It took the photographer 11 months to capture, using hidden cameras.

It was named the overall winner alongside 16 other category winners, including Liina Heikkinen’s The Fox That Got The Goose, which earned her the title of Young Wildlife Photographer Of The Year.

Now in its 56th year, the Wildlife Photographer Of The Year competition attracts entries from around the world and is open to snappers* of all ages, nationalities and abilities. This year’s winner was announced by the Duchess of Cambridge, herself a keen photographer.

“Hunted to the verge* of extinction in the past century, the Amur population is still threatened by poaching* and logging today.

“The remarkable sight of the tigress immersed* in her natural environment offers us hope, as recent reports suggest numbers are growing from dedicated conservation efforts. Through the unique emotive power of photography, we are reminded of the beauty of the natural world and our shared responsibility to protect it.”

Here are all the category winners, and the stories behind the striking images. This European stonechat bird (above) was captured on camera in grassland near Andres’ home in Andalucia, Spain. The young photographer asked his dad to drive to the area and park so he could use the car as a hide, kneel on the back seat and, with his lens on the window sill, shoot this pretty image through the open window. On a diving holiday in North Sulawesi, Indonesia, Sam spotted this clownfish (above) , whose mouth was constantly open – but it was only when he downloaded the photos that he saw tiny eyes peeping out of its mouth. The eyes belong to a “tongue-eating louse”, a parasitic isopod that swims in through the gills as a male, changes sex and attaches itself to the base of the tongue, sucking blood. When the tongue withers and drops off, the isopod takes its place. This young male proboscis monkey was a wild visitor to a feeding station at the Labuk Bay Proboscis Monkey Sanctuary in Sabah, Borneo, Malaysia. Trolle, who has been photographing primates around the world for five years, described him as “the most laidback character”. 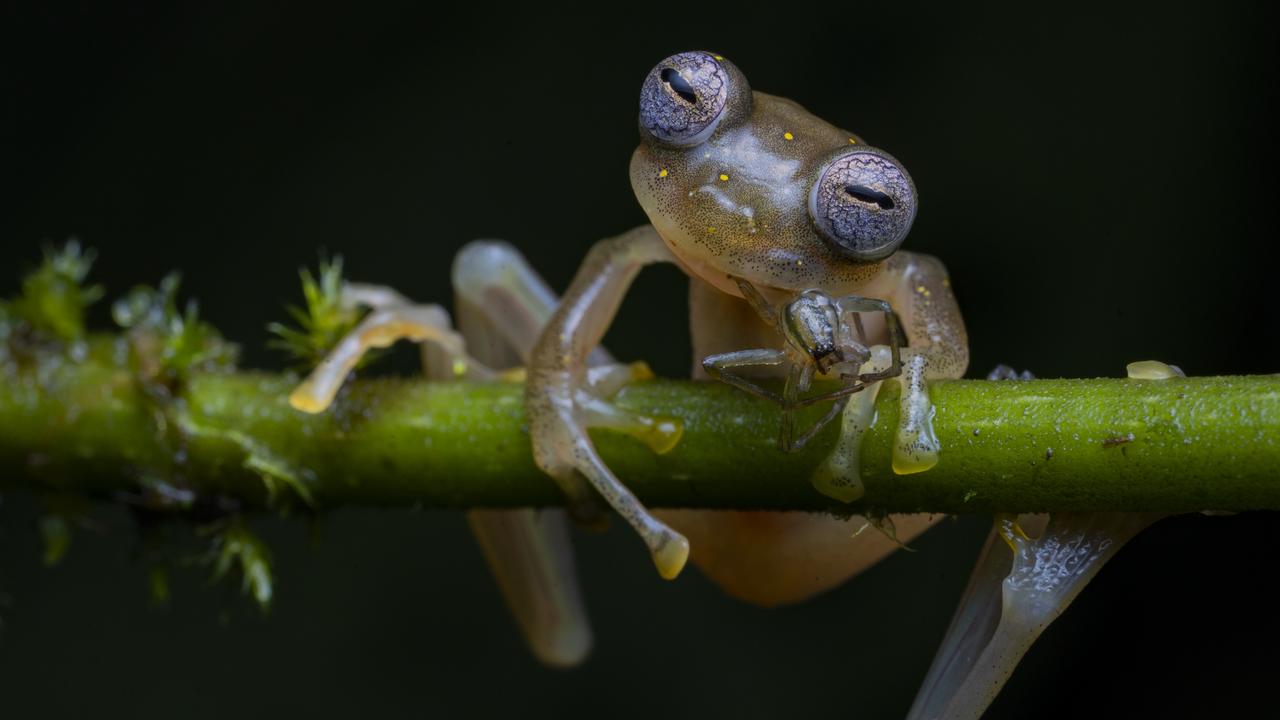 Life in the balance by Jaime Culebras, Spain Winner 2020, Behaviour: Amphibians and Reptiles. Picture: Jaime Culebras/Wildlife Photographer Of The Year 2020

After walking for four hours in heavy rain, Culebras captured this image of a glass frog eating a spider in the foothills of the Andes, northwestern Ecuador – and found out it was a newly discovered species, distinguished by yellow spots on its back and a lack of webbing between its fingers. Named the Manduriacu glass frog, this is the first ever picture of this species feeding. After several hours chest-deep in water near Brozas, in the west of Spain, Luis managed to capture this great crested grebe family. On this particular morning, he got the shot as the parent on breakfast duty emerged from the water with a meal for the chicks. This image, showing a red-banded sand wasp and a cuckoo wasp, is the result of painstaking* preparation. Deschandol positioned his camera next to a sandy bank near his home in Normandy, northern France, setting up an infra-red beam. When broken, this triggered a super-fast shutter system he had built using an old hard drive and positioned in front of the lens, as the camera’s own shutter would have been too slow. Despite his tiny subjects and complex technical set-up, he captured the perfect shot. This is a rare picture of a family of Pallas’s cats, or manuls, in the Qinghai-Tibet Plateau in northwest China, the result of six years’ work at high altitude. The cats are normally solitary, mostly active at dawn and dusk and usually very hard to find. After long-term observation, Li tracked the family as they descended to about 3800m and set up a hide on the hill opposite their lair, an old marmot hole. Hours of patience were rewarded when the three kittens came out to play, while their mother kept her eye on a Tibetan fox lurking nearby. Eisenband set out to photograph Ritak’ Uwa Blanco, the highest peak in the Eastern Cordillera of the Colombian Andes. But in the end, it was the foreground of flowers, known as white arnica, that captured his attention. After sunset, a “blue hour” drenched the scene in an ethereal* light. This image of a tiny diamondback squid paralarva (the stage between hatchling and subadult) was taken on a night dive far off the coast of Anilao, in the Philippines. Cai caught the transparent squid in a light beam, turning it to gold. Cordilleran flycatchers usually nest in crevices and on canyon shelves. However, this pair picked this remote research cabin in Montana’s Rocky Mountain Front instead – and happened to be the exact species being studied by biologists there. So as not to disturb them, Badyaev hid his camera behind a large piece of bark on an ancient tree leaning against the cabin and operated the set-up remotely. He captured his shot as the female paused to check on her four nestlings, recording his observations behind her. To witness lava flowing on the slope of Mount Etna, Italy, Gaudenzio and his colleagues trekked for several hours up the north side of the volcano. Luciano describes the scene as “hypnotic”, the vent resembling “an open wound on the rough and wrinkled skin of a huge dinosaur”. Taken in 2017, he had been on the nearby island of Stromboli to photograph eruptions there when he heard news of the new vent on Europe’s largest volcano, and took the very next ferry over in the hope of getting his shot. Luce has spent several years reporting on animal exploitation and abuse, but says this is the most symbolically shocking scene she has photographed. It shows a muzzled polar bear performing in the Circus On Ice in Russia, reportedly the only known circus to use the animals. The polar bear is one of four females, reportedly captured in Russia’s Franz Josef Land when they were two years old – they were “abandoned”, the trainer reportedly said – and were still performing 18 years later. This image was one of a series that won Hilton the photojournalist story prize. It shows a young pig-tailed macaque chained to a wooden cage in Bali’s bird market, Indonesia. Having convinced the trader he was interested in buying the monkey, Hilton was able to take the photograph in the dark backroom. This image shows a male Eleonora’s falcon bringing his mate food – a small bird, probably a lark – on the steep cliffs of a Sardinian island, Italy. Fantoni was watching from a hide on San Pietro Island, photographing the adults on their clifftop perch. Despite feeding his mate, the male bird always seemed reluctant to give up his catch without a struggle, the photographer said. These two are ferocious predators – a giant riverine tiger beetle and a weaver ant – the Natural History Museum says, and they don’t often meet. These two were captured on a dry riverbed in the Buxa Tiger Reserve, in West Bengal, India, by Biswas as he lay on the sand. “The beetle kept pulling at the ant’s leg, trying to rid itself of the ant’s grip, but it couldn’t quite reach its head,” he said. 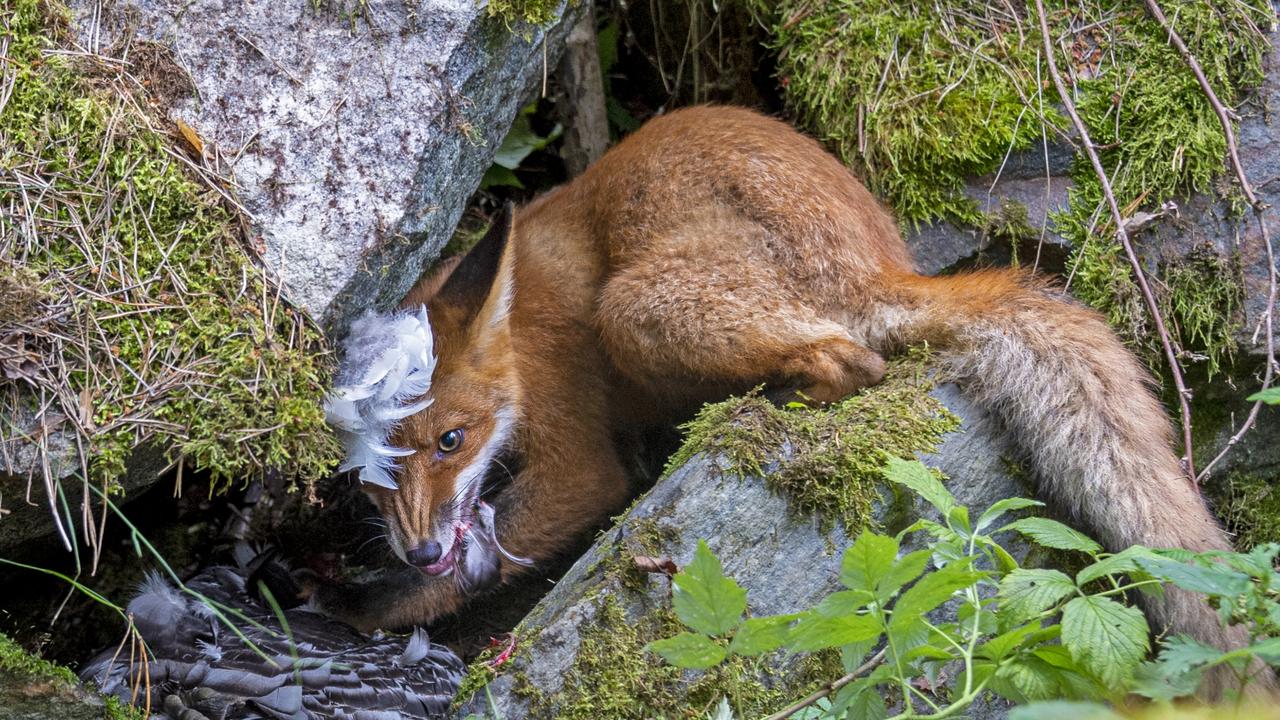 Liina was inspired to take this picture after hearing about a large fox family living in the city suburbs on the island of Lehtisaari, Helsinki, Finland. She spent a day with her father watching the two adults and their six cubs, with the vixen arriving with this abarnacle goose in the evening. After a fight between the cubs, this one was victorious*, dragging the bird away and attempting to eat it while blocking access to its hungry siblings.

CLASSROOM ACTIVITIES
1. Photographic Excellence
Carefully study each of the prize-winning photos. On a blank page, write the subject of the photo (such as tiger, lava, glass frog) and beside each one, think of one word that comes to your mind to describe the photo or what’s in it. Be as descriptive as you can in your responses. You can write them in a list down the page or, if you have time, come up with a different way to display the words.

2. Extension
The animal exploitation and abuse photos are hard to view. How could these photos be used to help animals being exploited around the world?

VCOP ACTIVITY
Animal Alliterations
With a partner, choose one of the pictures from the article.

Make a list of nouns you could use to name the animal in the picture. For example, instead of a tiger, you could also say cat, or feline.

Now, using the initial sound, make a list of adjectives to describe the animal. Try and be specific. Don’t just look at the animal as a whole, look at their different features as well.

Try and put it all together and use as many same sound words in a sentence, to create an alliteration about the animal in the picture.

HAVE YOUR SAY: Which photo would you like to have taken? Why?
No one-word answers. Use full sentences to explain your thinking. No comments will be published until approved by editors.