A selection of Sydney funnel-web spiders are scrambling into the Australian bush carrying special cargo: a telemetry* tracker to study how far a mature male can travel at night and whether their movements are affected by the environment and weather.

Caitlin Creak, a PhD candidate at the School of Biological*, Earth and Environmental Sciences at the University of New South Wales, has been tracking the male Sydney funnel-web, one of the world’s deadliest spiders, for two summers. The nocturnal* arachnid* lives within around 100km of Australia’s largest city, and is mostly active between November and April. A PhD candidate at the School of Biological, Earth and Environmental Sciences at the University of New South Wales, Caitlin Creak is tracking how far a mature male can travel at night and whether their movements are affected by the environment and weather. Picture: Caitlin Creak, UNSW

Having grown up in Australia’s bushland, the 27-year-old researcher is no stranger to spiders, but Ms Creak’s affection for them grew once she learned more about them during her biology degree, and began interacting more closely with a species most people are keen to avoid.

Most studies on the Sydney funnel-web spider focus on its venom* and taxonomy*, but Ms Creak’s study focuses on its behaviour and ecology*.

“The Sydney funnel-web has a human-lethal venom, which is just a bit of an evolutionary* coincidence, as we suspect at this stage,” she said. “That’s kind of all we know about them, to be honest. We don’t actually really know anything else in terms of their behaviour, their biology or their ecology.” 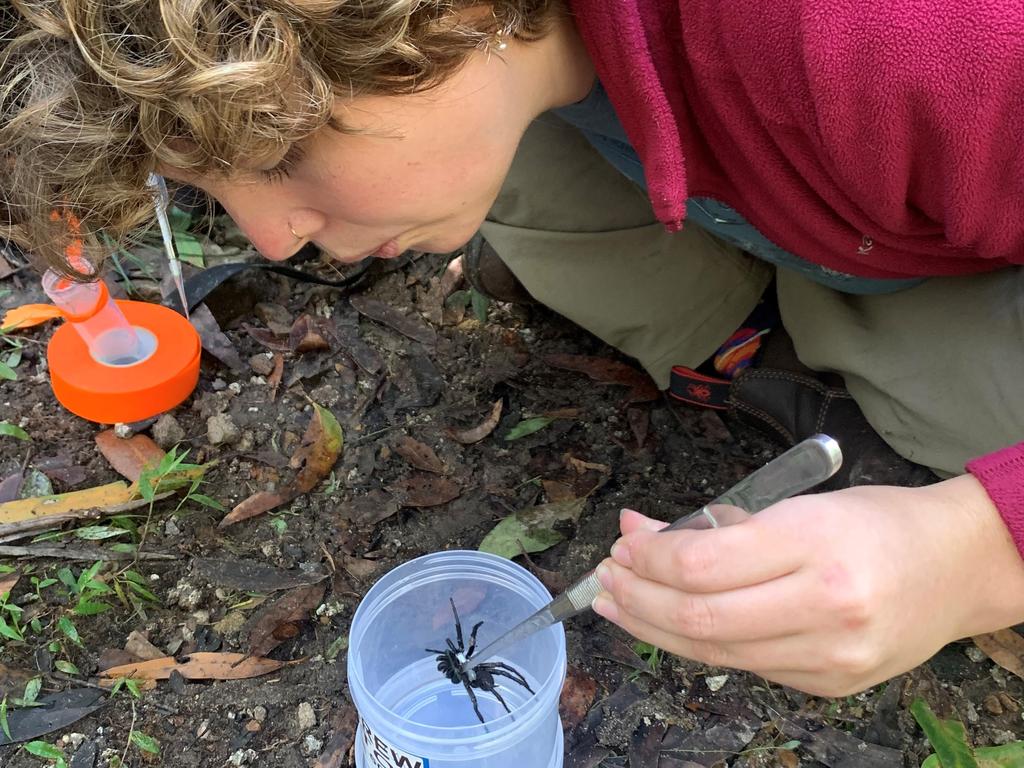 There are eight funnel-webs involved in the study. To be able to attach the tracker, each spider must first be knocked out with carbon dioxide*, a standard practice for sedating* invertebrates*, Ms Creak said.

As the spider dozes for a couple of minutes on a wet sponge that keeps it hydrated*, Ms Creak places a second sponge around its head to safely glue the small tracking device, slightly bigger than a grain of rice, to its fused head and thorax*, called the cephalothorax.

Ms Creak is extremely cautious when handling funnel-webs and never touches them with her hands. Instead, she uses 30cm-long forceps*. When awake, the spiders are kept in a thick plastic container.

Weather permitting, Ms Creak tracks the spiders daily for as long as the trackers stay functional. They can sometimes come loose and the tiny batteries last about a month.

“In the morning, I’ll come back, and I’ll be able to see how far he’s gone overnight,” said Ms Creak. “Once they’re used to having a tracker on, they’re off. They can go … anywhere between a metre to 60m in a night, that I’ve recorded.” With a receiver and antenna, Ms Creak treads carefully over vegetation, logs and leaf litter to track the spiders at night. Picture: Caitlin Creak, UNSW

It is no easy task to track the arachnids. With a receiver and antenna, Ms Creak must tread carefully over vegetation, logs and leaf litter. The telemetry tracker on the spider sends beeps to the receiver as Ms Creak gets close.

Australia has many species of funnel-webs but only the male Sydney funnel-web is responsible for human deaths. Only 13 deaths have been recorded but more than 30 people are bitten by the spider each year, according to the Australian Museum.

“We’re with them all the time, we might as well try and coexist and to do that, we need to know more about them,” Ms Creak said of the spiders during a recent tracking expedition.

CLASSROOM ACTIVITIES
1. Funnel-web knowledge
Researcher Caitlin Creak states that, “We’re with them all the time, we might as well try and coexist and to do that, we need to know more about them.”

This is why she has begun tracking their movements to learn more about them.

Jot down some ideas in the table below:

2. Extension
Draw a map of a fictional night of movement for the Sydney funnel-web spider. Around your map, write down how far it travelled, what some of its movements entailed and what some of its behaviours were.

What would you like to know about this spider?

VCOP ACTIVITY
An eight-legged adventure
Imagine if we didn’t have these tiny trackers but instead had the ability to shrink humans down to the size of a grain of sand. Then you were strapped to a tiny saddle on the spider’s head. You are going to head off on an overnight adventure through the Australian bush. Luckily, you are equipped with night vision goggles and a radio headset so you can document clearly the whole experience.

Tell us in detail about the night you rode a spider!

Include as much description of the senses as you can – what can you see, hear, touch, taste and smell? Remember that touch is feeling anything on any part of your body, not just using your hands.

Re-read your work aloud to carefully edit and up-level before sharing with a classmate.