Stewy the Snake Catcher frees the tiger snake from the beer can. Picture: supplied

A tiger snake with a taste for Australian beer found itself trapped while trying to drink from a can this week.

The venomous* reptile slithered into the can in Wyndham Vale in Melbourne’s western suburbs and became stuck.

Stewart Gatt — aka Stewy the Snake Catcher — said its head was trapped. 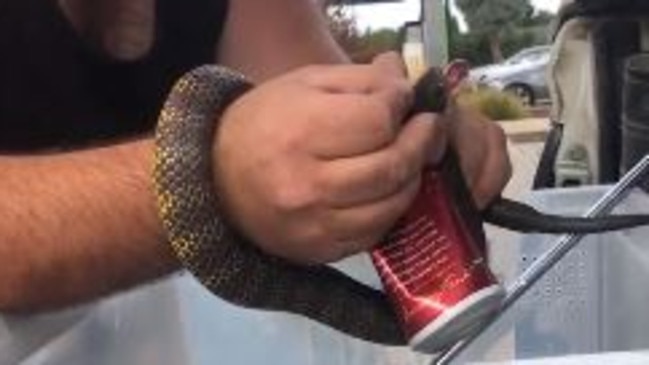 It was a tight fit for the snake inside the can.

The residents who found the snake in trouble tried to free it themselves. Not a wise move as getting the snake free was not easy — even for a professional.

“The snake was in enough it was stuck in the can. If you cut the wrong spot you could hurt the snake. It is a very delicate* situation.”

Mr Gatt tried to reassure the snake that he was there to save it, not that it helped.

“Yeah mate, I know you are in pain. Just relax for a minute,” he said in the video.

“Stop struggling for a minute. Relax mate, I am saving you.” The snake with its head stuck deep inside the can. Picture: supplied The tiger snake tried to bite the can.

As Mr Gatt cut a hole in the can, the snake popped its head through and tried to bite the can.

“Snakes are deaf so I have no idea why I was doing it. I was talking myself through it really,” Mr Gatt said.

“I do not know what the fascination* with snakes and cans is. He was thirsty and probably wanted a dark spot and once he sticks his head in, he cannot stick his head out again.”

Mr Gatt has been caring for the tiger snake since the rescue and is expected to release the animal this week.

“We are going to make sure there are no ongoing injuries,” he said.

Tiger snake freed from beer can

The average length for mainland tiger snakes is about 1.2m, although they may reach up to 2.1m. In general, males appear to be bigger than females.

Tiger snakes are highly venomous, quick to bite when cornered and very common around most of Victoria, much of New South Wales, far southeast Queensland, Tasmania, southeast South Australia and southwest Western Australia.

CLASSROOM ACTIVITIES
1. Sneaky snake
Summarise this article in no more than three sentences. What is it mostly about?

How did Mr Gatt free the snake? Why was it so difficult?

Why do you think Mr Gatt was speaking to the snake while trying to free it? How was Mr Gatt feeling?

Write a list of facts about Tiger snakes that you can find in the article.

2.  Extension: Re-write this article from the snake’s point of view. What would the snake be thinking? What could it see and smell etc. Use clues from the article to understand how the snake would recall the event.

3. Free the snake without being bitten
Freeing this snake from the can was a dangerous operation. Tiger snakes are venomous and its rescuers could easily have been bitten. Explain to a partner what steps you think you should take if you or a friend was bitten by a snake.

Research the recommended first aid treatment for snake bites. How close were you?

Design a poster that outlines the recommended steps to treat a snake bite. Use headings, diagrams and pictures to help make your poster stand out.

4. Extension
The snake in this story crawled into a can that was left lying around as litter.

Write a letter from the snake to convince people to be more careful with their rubbish. Use examples of how wildlife can be affected by litter to help make your point. Include suggestions of how humans can prevent this kind of thing happening again.

In one sentence, tell us what you like about today’s story
Please do not use one-word answers. Explain exactly what you enjoyed about the article and use lots of adjectives.