Thylacines could be prowling Tasmanian forests within a decade 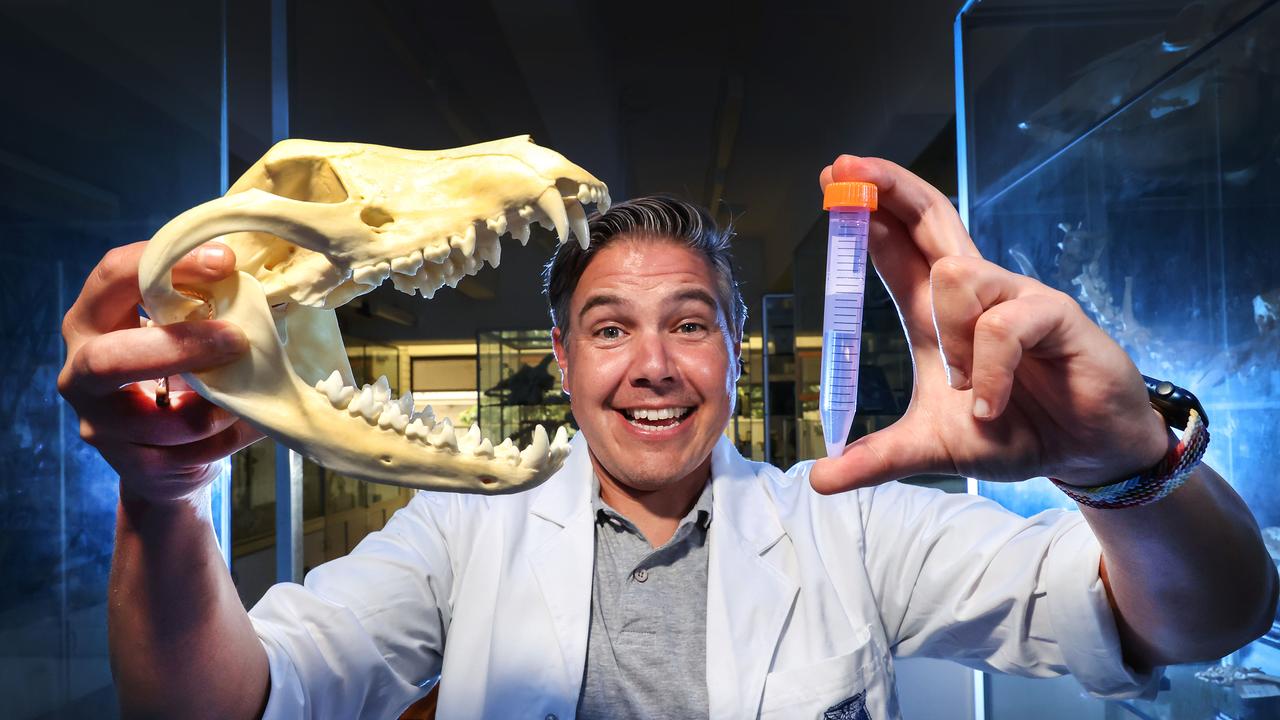 Professor Andrew Pask hopes to bring the Tasmanian tiger back to life using the surrogate uterus of another animal. He is pictured holding a thylacine skull and a test tube containing DNA. Picture: David Caird

The race is on to bring the extinct* Tasmanian tiger back to life. With echoes of a Jurassic Park script, the marsupial* could soon prowl again after almost 100 years.

Hot on the heels – or perhaps paws – of numbat* genome* mapping at the University of Western Australia’s DNA Zoo, the University of Melbourne has announced its bold ambition to return thylacines* to the wild within a decade – that’s if its own project is successful.

“It isn’t science-fiction any more. This is stuff we have the ability to do now,’’ said University of Melbourne Professor Andrew Pask, from the School of Biosciences. 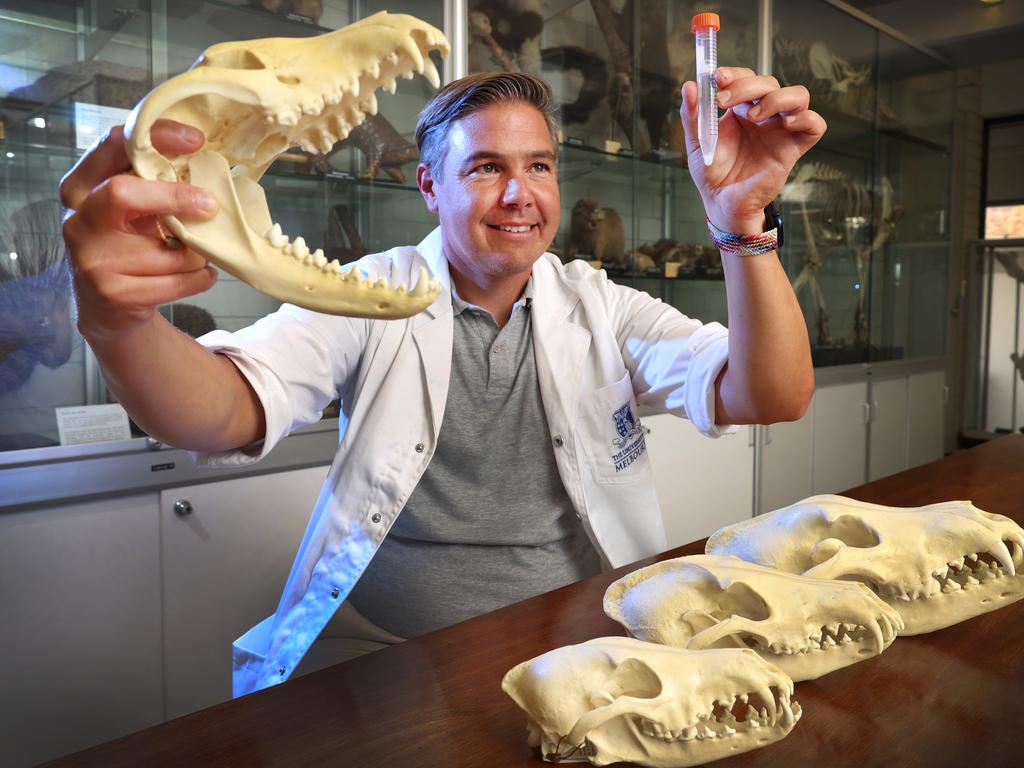 Professor Andrew Pask said the technology exists right now and we are no longer talking about a science fiction scenario. Picture: David Caird

The “de-extinction” process involves using stem cells* to make an embryo* which is then transferred into the uterus* of a surrogate* animal, such as a Tasmanian devil or a dunnart, a mouse-sized marsupial.

The research could also resurrect* other recently extinct species. 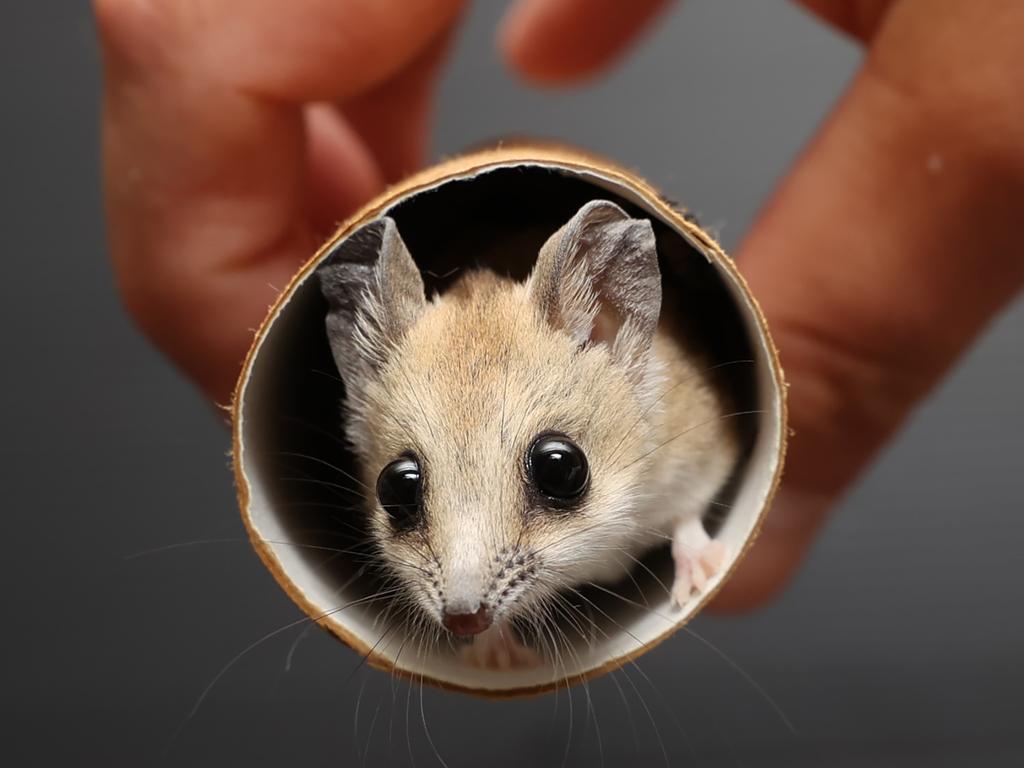 This small Australian marsupial known as a dunnart could hold the key to bringing the Tasmanian tiger back from extinction. Picture: David Caird

The research could also resurrect* other recently extinct species.

“Dinosaurs … there’s no DNA* left, they’re just too old, but for things that have become extinct in the last few thousand years, there’s a distinct possibility you could then sequence the blueprint* in their genome and then bring those species back,” Professor Pask said.

The creation of the TIGRR (Thylacine Integrated Genetic Restoration Research) Lab is being funded by a $5 million donation from the Wilson Family Trust.

The project will study the genome sequencing of other thylacine remains from museum collections, including their skins and skeletons, to get a variety of specimens in order to avoid future inbreeding*. Multiple thylacine skin and bone specimens will be used in the project to ensure as much variety as possible. Professor Pask is pictured left, with Tasmanian Museum and Art Gallery senior curator of vertebrate zoology Dr Kathryn Medlock and Dr Axel Newton. Picture: Richard Jupe

“We can use the DNA from all those so we can understand the differences that exist in a healthy population and … we can recreate a population that has a healthy genome and multiple individuals (and) we will be able to breed them,” Professor Park said.

“The idea is to release them back into the environment.’’

As the Tasmanian habitat* has remained largely unchanged, Professor Pask said it would provide the perfect environment to reintroduce the species.

The thylacine was hunted into extinction by colonists* by 1936. Reported sightings of the animal over the years have never been confirmed.

The research is expected to help in the conservation of other native marsupials that are either endangered* or extinct. Two thylacines in their enclosure at Hobart’s Beaumaris Zoo, circa 1912. The species was hunted to extinction by 1936.

Professor Pask said he would like to see the creation of a “bio bank” of genetic material of many lost species so that they could be turned back into living species again.

“This project about creation and conservation,” he said.

“Humans were responsible for wiping (thylacines) out and we can now apply technology to bring those animals back, which is just an amazing feat of science.

“We all saw Jurassic Park and thought ‘wow, that’s crazy’, but we can actually do that, not for dinosaurs but for other species.

“We have every single bit of technology there, it’s just a matter of adapting it and applying it for marsupials. And we can do it.’’ The “de-extinction” of the Tasmanian tiger has been an ambition for generations of Australian scientists. Professor Pask crouches down to eye-level with a Tasmanian Museum and Art Gallery specimen, accompanied by senior curator of vertebrate zoology Dr Kathryn Medlock and Dr Axel Newton. Picture: Richard Jupe

“We came across Professor Pask’s incredible work, believe it or not, via some YouTube clips (of) him talking about his research and passion for the thylacine and Australian marsupials,’’ Mr Wilson said.

“We realise that we are on the verge of a great breakthrough. The benefits of this open research will be wide and varied.”

CLASSROOM ACTIVITIES
1. Write a letter
Choose an extinct creature that you would like to bring back to life. Write a letter to Professor Pask. The purpose of your letter is to convince him to choose your animal as the next one they should try to find a way to bring back.

2. Extension
“Scientists should focus on saving living animals from extinction, not worrying about animals that are already extinct!”

What do you think about this statement? Write down convincing arguments for or against.

Create a list of solutions to present to the local community of people who might be concerned about a predatory animal being released back into the wild. Obviously this is still a long time away, but can you help put some minds at ease?

Remember that the audience you are presenting your solutions to will need convincing that your ideas are worth considering. Use formal and emotive language to show that you have really considered the possible implications and have come up with some pretty good solutions. To create an even bigger impact, try including the potential problem in the argument, then address the issue by offering a solution. This will show the audience you are really considering their thoughts and feelings.

Read your solutions out loud to see how they sound. Remember to use your presentation voice (imagine you are reading it out at assembly, for example) to really hear the voice you have created in the piece.