This dinosaur could be biggest creature ever to walk the Earth 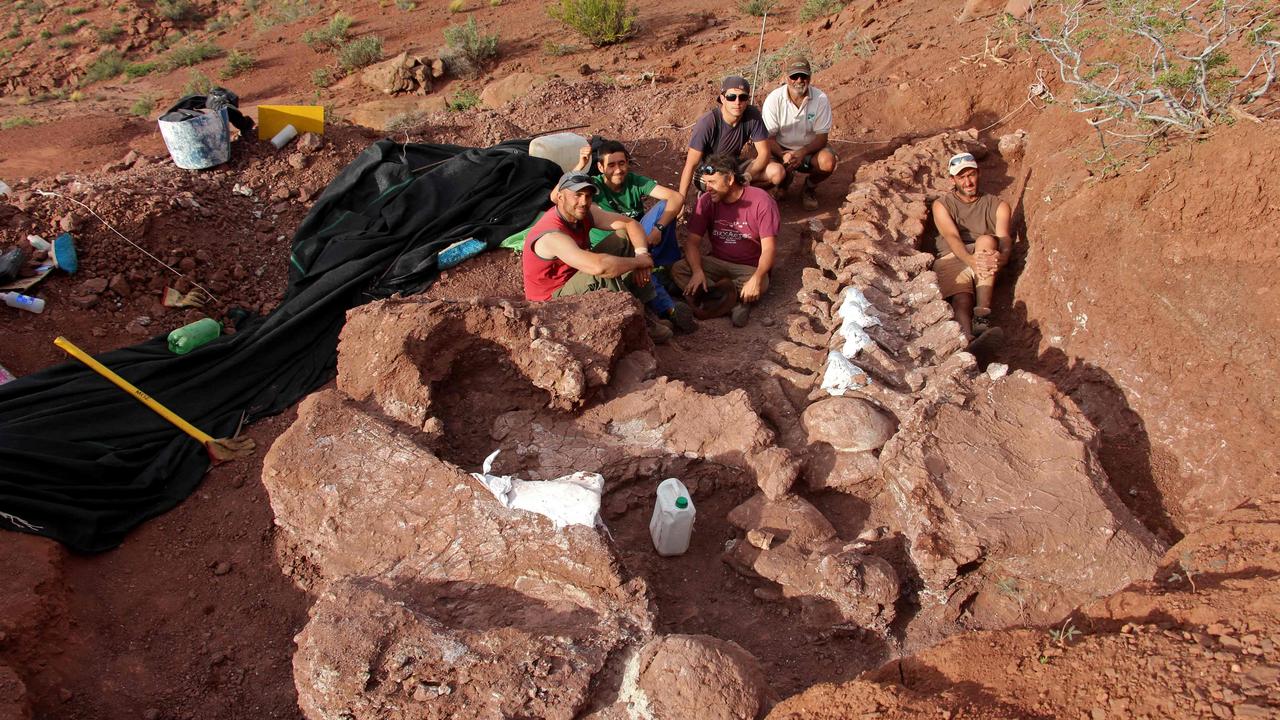 Palaeontologists during an excavation in which 98 million-year-old fossils were found at the Candeleros Formation in the Neuquen River Valley in southwest Argentina. Picture: AFP/CTyS-UNLaM/Jose Luis Carballido

Palaeontologists* are digging up the fossilised skeleton of a dinosaur they now believe is the largest animal ever to walk on Earth.

The experts began carefully uncovering 24 giant vertebrae* plus a pelvis* and pectoral girdle* in 2012 but didn’t know what it was they were uncovering.

In research published in the journal Cretaceous Research this week, palaeontologists say they now believe the remains to be of a type of long-necked, plant-eating dinosaur called a titanosaur, possibly the largest ever unearthed.

They have dated it to be 98 million years old. Palaeontologists uncovering the fossilised vertebrae of the titanosaur at the Candeleros Formation in the Neuquen River Valley, Argentina. Picture: AFP/CTyS-UNLaM/Jose Luis Carballido

The dig site is part of the Candeleros Formation in Argentina’s Neuquén Province.

“Given the measurements of the new skeleton, it looks likely that this is a contender* for one of the largest, if not the largest, sauropods that have ever been found,” Paul Barrett, a palaeontologist at the Natural History Museum in London, UK, who was not involved in the study, told website Live Science.

“This new skeleton provides yet another example of sauropods pushing at the extremes of what’s possible with respect to* maximum animal size on land.”

Accurately estimating the size and weight of the dinosaur would be much easier if palaeontologists found load-bearing bones such as the femur (thigh or upper front leg) and humerus (upper front leg or arm). Artist’s impression of a giant titanosaur, based on the fossilised bones of Australia’s largest dinosaur. Picture: AFP

TITANOSAURS
Titanosaurs lived from the late Jurassic to the end of the Cretaceous period.

About 40 species have so far been found and they are known to have lived on every continent except Antarctica.

David Elliott found the fossilised toe of a type of titanosaur on his sheep farm at Winton, Queensland, in 2005. It turned out to belong to a previously unknown species now named Savannasaurus elliottorum.

Like other sauropods, titanosaurs were four-legged herbivores* with long necks, small heads and long tails, but were stockier* and stood with their legs farther apart than other sauropods.

It’s thought the largest titanosaurs were Patagotitan (63.5 tonnes) and Argentinosaurus (70 tonnes) but there’s not yet enough fossil evidence to know this accurately.

Dreadnoughtus, 26m long and weighing 59 tonnes, was the largest titanosaur whose size can be calculated accurately. It was also the largest known land animal in Earth’s history.

Blue whales are the largest animal known to have ever existed and can reach 29.9m long and weigh 173 tonnes.

CLASSROOM ACTIVITIES
1. What do we know?
As with many scientific discoveries, there are some things that paleontologists can know for sure about this newly discovered dinosaur, some things that they can make hypotheses about and some things that are completely unknown. Identify one known fact, one hypothesis and one unknown from this news story.

2. Extension
Often to get a clearer understanding of the size of very large things we compare them to other well-known items. The largest titanosaur whose size can be calculated accurately is the dreadnoughtus which was around 26m long and weighed 59 tonnes. This is approximately the length of 2 buses and the weight of 3 buses. Think of 3 other common items and explain the length and weight of the dreadnoughtus in terms of that item.

They can be used for a variety of effects: to add more detail, to add humour, to connect with the reader etc. Here’s an example: My little brother, (the funniest kid I know) got himself into big trouble today.

HAVE YOUR SAY: What type of dinosaur would you like to dig up?
No one-word answers. Use full sentences to explain your thinking. No comments will be published until approved by editors.