The mighty lizard king could have shared the top dinosaur crown An artist's impression of a Tyrannosaurus imperator (tyrant lizard emperor) attacking a triceratops herd. Researchers believe the Tyrannosaurus rex might actually have been three species of dinosaur after finding differences in Tyrannosaurus leg bones and dental structures across specimens. Picture: Gregory S Paul

Tyrannosaurus rex might have been three species of dinosaur instead of one. Fresh analysis of Tyrannosaurus skeletons has revealed physical differences in the femur* and dental structures across specimens* that could indicate the mighty king of dinosaurs should be reclassified* as three distinct species. Researchers have suggested there could have been three distinct species of Tyrannosaurus after analysing the bones and dental remains of 37 specimens.

Tyrannosaurus rex is currently the only recognised species of the group. Previous research has acknowledged variation across Tyrannosaurus skeletal remains in the femur and specimens with either one or two slender incisor teeth on each side of the front ends of the jaw.

Researcher Gregory Paul and colleagues* analysed the bones and dental remains of 37 Tyrannosaurus specimens. The authors compared the robustness* of the femur in 24 of the specimens, with length and circumference* helping to indicate the strength of the bone. They also measured the diameter* of the base of teeth or space in the gums to assess if specimens had one or two slender incisors. 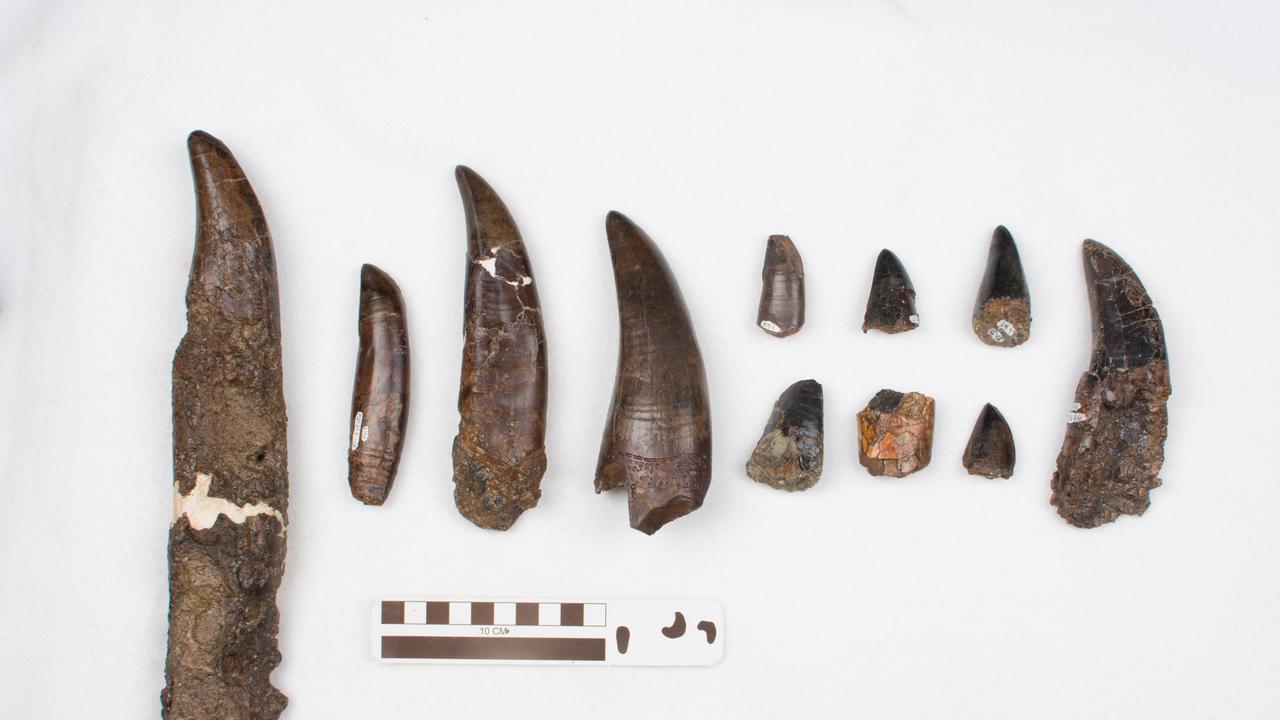 Pictured is part of the skull of the world’s largest Tyrannosaurus rex, dubbed “Scotty”. Dental remains of 37 Tyrannosaurs have been included in the analysis of researchers who have now suggested there are three species rather than one. Picture: AFP Photo/University of Alberta/Amanda Kelley

The authors found that the femur varied across specimens, with two times more robust femurs than thin ones across specimens – suggesting the difference was not between males and females, which would likely result in a more even split.

“We found that the changes in Tyrannosaurus femurs are likely not related to the sex or age of the specimen,” lead author Mr Paul said. “We propose that the changes in the femur may have evolved over time from a common ancestor* who displayed more robust femurs to become more gracile* in later species. This Tyrannosaurus rex skeleton, named Stan, was on display in New York City last year. “Slender” is not a word we would use to describe this tyrant lizard king. Picture: AFP

“The differences in femur robustness across layers of sediment* may be considered distinct enough that the specimens could potentially be considered separate species.”

But there are difficulties trying to assign fossil vertebrates to potential new species and researchers could not rule out extreme individual differences as the cause of variation. They nonetheless concluded that the level of variation found in the Tyrannosaurus specimens, combined with their relative position in sediment layers, could signify the two new species. 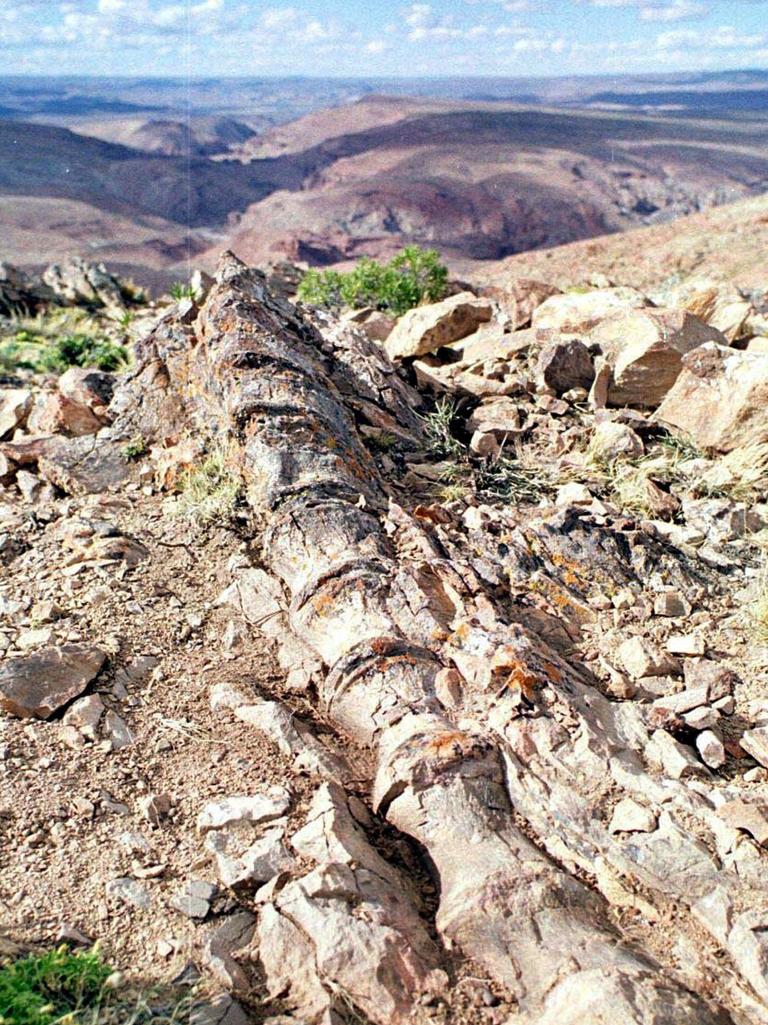 Argentina in South America is regarded as a dinosaur treasure trove. Pictured here is the exposed spine of a specimen discovered in 2001 in a fossil-rich area southwest of Buenos Aires. Now a new species of carnivorous dinosaur has been found.

Argentinian scientists have meanwhile unearthed the remains of a previously unknown species of another meat-eating dinosaur that lived about 70 million years ago. It had such little arms that it may have used its powerful head to ram its prey.

The fossil skull of the Cretaceous Period dinosaur, named Guemesia ochoai, was discovered in Argentina’s northwest. The researchers said it likely belonged to a carnivorous* group of dinosaurs called abelisaurs, which walked on two legs and had stumpy arms even shorter than the Tyrannosaurus rex.

“It’s so unique and so different from other carnivorous dinosaurs, which allows us to understand that we’re dealing with a totally new species,” said lead author of the study Federico Agnolin.

The animal, possibly a juvenile, lived just a few million years before an asteroid* wiped out about three-quarters of Earth’s species, including dinosaurs, about 66 millions years ago.

“We know it had a very sharp sense of smell and was shortsighted,” said Mr Agnolin, noting that it would have walked upright on its large feet, with its solid cranium* leading the way.

“Some scientists think that could mean the animal hunted its prey by charging them with its head.”

The discovery adds to Argentina’s reputation as a treasure trove of fossils of dinosaurs and other prehistoric creatures.

CLASSROOM ACTIVITIES
1. Tyrannosaurus traits
Compare and contrast similarities and differences between the original Tyrannosaurus rex with the two new Tyrannosaurus species researchers think they have discovered by drawing two intersecting circles. Use the evidence provided in the Kids News article to complete your diagram.

2. Extension
New dinosaur species are still being found around the world, including Argentina. Why is it important to continue this scientific research of what species did exist and how they lived?

Why do you think Argentina is a treasure trove?

VCOP ACTIVITY
Adjectives
An adjective is a describing word. They are often found describing a noun. To start with, look at the words before the nouns.