The massive shark would have been much bigger than a human.

Rare evidence of a 9m-long prehistoric* mega*-shark has been found at an Australian beach.

The predator* would have been almost twice the size of modern Great Whites.

Local teacher and citizen scientist Philip Mullaly uncovered a set of 7cm teeth from the massive Great Jagged Narrow-Toothed Shark, the first fossil* evidence of its kind found in Australia and one of only three in the world. 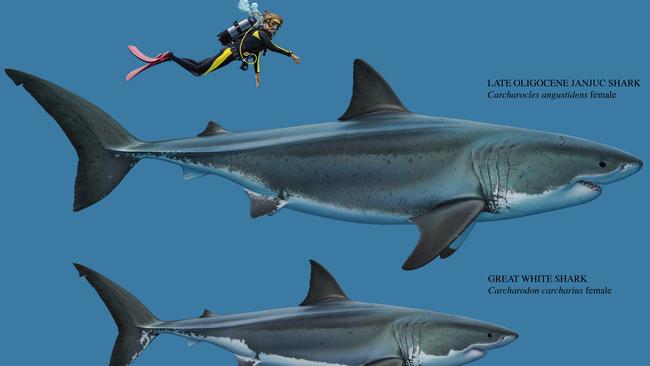 This size comparison chart shows how much bigger the mega-shark would have been compared to modern Great White sharks and humans.

The teeth were discovered in a boulder* at Jan Juc beach in Victoria. The boulder also contained teeth of several Sixgill shark species, which Museums Victoria palaeontologists* believe is evidence the smaller sharks feasted on the giant after its death.

“I was walking along the beach looking for fossils, turned and saw this shining glint in a boulder and saw a quarter of the tooth exposed,” Mr Mullaly said.

“I was immediately excited, it was just perfect and I knew it was an important find that needed to be shared with people.” Victoria’s Surf Coast is a renowned hotspot for fossils and Museums Victoria senior palaeontologist Dr Erich Fitzgerald said the expedition* to extract the more than 40 teeth from the site, last December and January, had produced material of great interest to the world.

“They represent one of just three associated groupings of (these) teeth in the world, and the very first set to ever be discovered in Australia,” Dr Fitzgerald said.

“By donating his discovery to Museums Victoria, Mr Mullaly has ensured that these unique fossils are available for scientific research and education both now and for generations to come. This is absolutely essential for documenting* and preserving* Australia’s prehistoric history.” 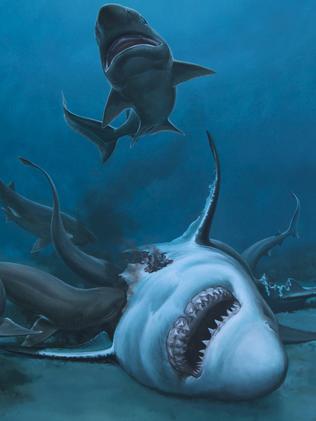 An artist’s impression of a prehistoric shark feast.

Museums Victoria palaeontologist Tim Ziegler said the other Sixgill fossils from several ancient individuals would have come loose from the smaller sharks’ jaws as they fed on the body of the mega-shark after it died.

“Sixgill sharks still live off the Victorian coast today, where they live off the remains of whales and other animals. This find suggests they have performed that lifestyle here for tens of millions of years.”

prehistoric: the period before written records

predator: an animal that naturally preys on others

fossil: the remains or impression of a prehistoric plant or animal embedded in rock and preserved in petrified form

roamed: move about aimlessly, especially over a wide area

documenting: record (something) in written, photographic, or other form

preserving: maintain (something) in its original or existing state

1. How long was the prehistoric shark when it lived?

2. What was the fossilised tooth found in and where?

3. How many years ago was the shark thought to have lived?

4. How did Mr Mullaly spot the tooth?

5. How many other fossilised teeth from the mega-shark have been found in Australia?

1. Why are fossil finds so important?

List all of the different things that you think we can learn from fossils. Then, choose the three most important things, or points, in your list. Write sentences explaining why you choose these three points.

2. Extension: Create an advertisement for the Mega-Shark Fossil Find. This can be a poster: a storyboard or script for a YouTube, radio or TV ad; or a print advertisement (one in a magazine or newspaper). Your ad should be aimed at teachers and help them to understand why they should bring their classes to see the display.

HAVE YOUR SAY: How did you feel when you read about this 9m-long prehistoric shark?
historyNo one-word answers. Use full sentences to explain your thinking.