Researchers Emily Shepard, left, and Sergio Lambertucci, centre, and technician Orlando Mastrantuoni, right, hold an Andean condor that is going to be released after GPS-DD tagging efforts in the Patagonian steppe of Argentina. Picture: Ugo Mellone via AP

Scientists have observed an Andean condor flying more than 160km over five hours without flapping its wings.

The observation was part of a new study that sheds light* on how efficiently the world’s largest soaring bird species rides air currents to stay aloft* for hours with no wing flapping to help.

The Andean condor has a wingspan stretching to 3m and weighs up to 15kg, making it the heaviest soaring bird alive today. 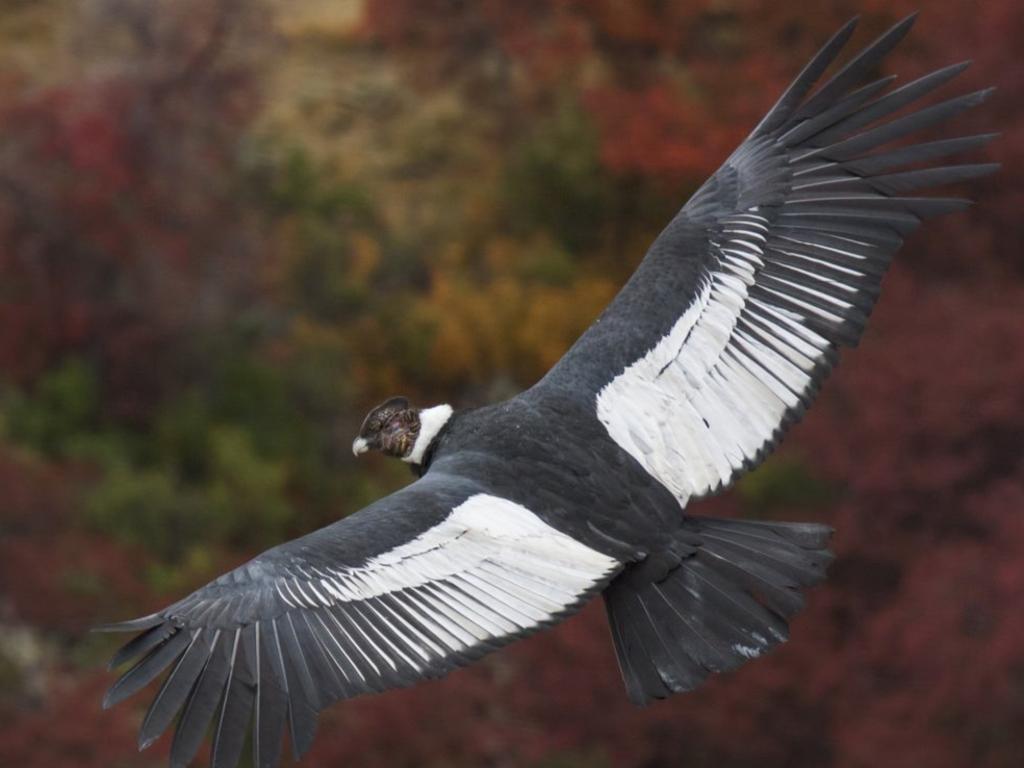 To this Andean condor, the sky is a landscape of invisible features – wind gusts, currents of warm rising air, and streams of air pushed upward by ground features like mountains. Picture: Facundo Vital via AP

For the first time, a team of scientists strapped recording equipment they called “daily diaries” to eight condors in Patagonia to record each wingbeat over more than 250 hours of flight time.

Incredibly, the birds spent just 1 per cent of their time aloft flapping their wings, mostly during takeoff. One bird flew more than five hours, covering more than 160 km, without flapping its wings.

“Condors are expert pilots — but we just hadn’t expected they would be quite so expert,” said Emily Shepard, a study co-author and biologist at Swansea University in Wales, UK.

The results were published Monday in the journal Proceedings of the National Academy of Sciences.

“The finding that they basically almost never beat their wings and just soar is mind-blowing,” said David Lentink, an expert in bird flight at Stanford University, US, who was not involved in the research.

To birds, the sky is not empty, but a landscape of invisible features — wind gusts, currents of warm rising air, and streams of air pushed upward by ground features such as mountains.

Learning to ride air currents allows some birds to travel long distances while minimising the exertion* of beating their wings. An Andean condor soars above the Patagonian steppe in Argentina. Picture: Alvaro Moya Riffo via AP

TWO TYPES OF FLIGHT
Scientists who study flying animals generally consider two types of flight: flapping flight and soaring flight. The difference can be compared to peddling a bicycle uphill, versus coasting downhill, said Bret Tobalske, a bird flight expert at the University of Montana, US, who was not involved in the study.

Past studies have shown that white storks and osprey flap for 17 per cent and 25 per cent of their overland migratory flights, respectively*.

The Andean condor’s extreme skill at soaring is essential for its scavenger lifestyle, which requires hours a day of circling high mountains looking for a meal of carrion*, said Sergio Lambertucci, a study co-author and biologist at the National University of Comahue in Argentina.

“When you see condors circling, they are taking advantage of those thermal uplifts,” or rising gusts of warm air, he said.

The recording devices were programmed to fall off the birds after about a week.

Retrieving them wasn’t so easy.

“Sometimes the devices dropped off into nests on huge cliffs in the middle of the Andes mountains, and we needed three days just to get there,” said Dr Lambertucci. Do you think this explains why a condor has learnt to be such an expert pilot?

2. Extension
In the article, the scientists stated that these condors were found to only flap their wings for 1 per cent of the 250 hours of flight that was recorded. How many hours is that?

What could other birds learn from the condor?

HAVE YOUR SAY: Which bird would you like to be an expert on? Why?
No one-word answers. Use full sentences to explain your thinking. No comments will be published until approved by editors.