Spotting any whale is exciting, but keen whale watchers most want to see Migaloo 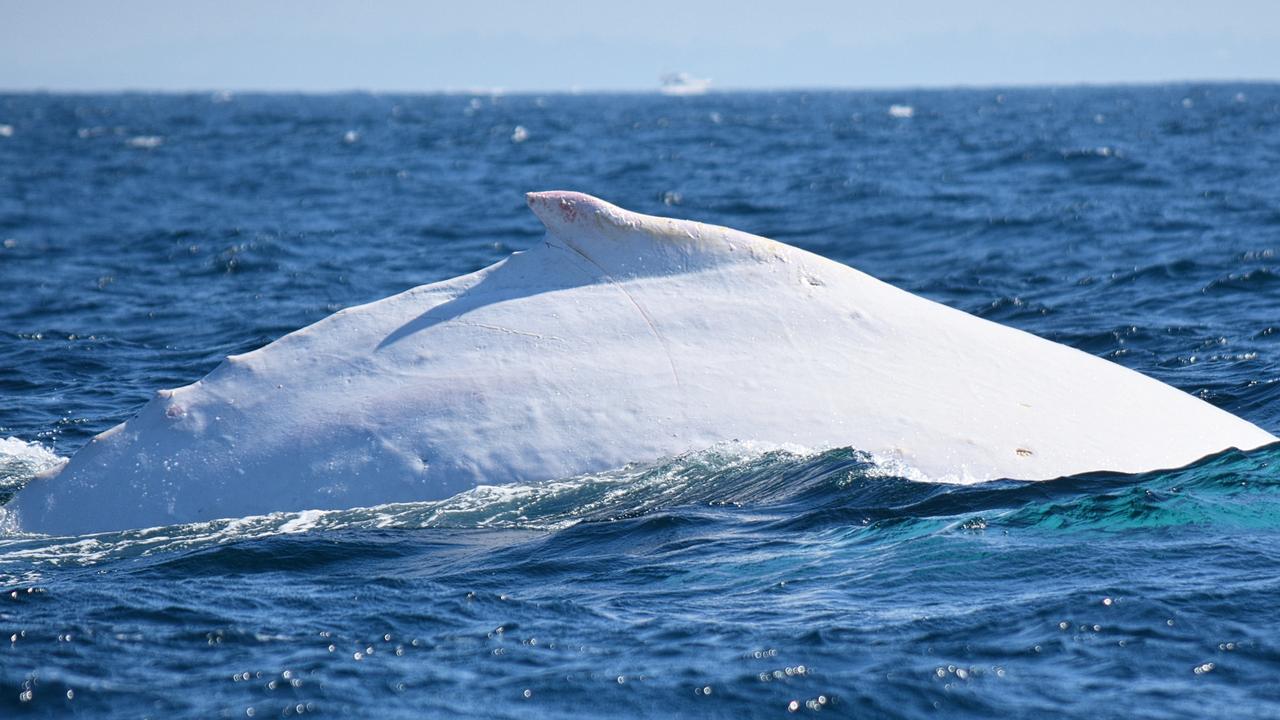 Migaloo on a previous visit to the east coast, about 16km off Byron Bay, NSW. Picture: Sean O'Shea

And for the next few weeks, whale watchers are on the lookout for a very special white humpback whale.

The whale named Migaloo has been cruising along the east coast of Australia every year since he was first spotted near Byron Bay, NSW in 1991.

It is thought he was born between 1986-1989 and some people believe he could be turning 30 years old this winter.

The 40-tonne, 15m white whale spends summer feeding on krill* around Antarctica and his usual program is to appear around New Zealand some time later in June, then on the east coast of Australia around three weeks later, perhaps by mid to late July.

He is usually first seen off Australia around Byron Bay or the Gold Coast, Qld, but is also seen further north along the Queensland coast on his way to warmer waters, before heading back down to Antarctica for the next summer. The round trip is about 10,000km.

The name Migaloo is from an Indigenous word used in some parts of Queensland meaning “white fella”.

VIDEO: Migaloo breaching near Byron Bay, NSW, in May 2017

Scientists don’t know for sure why Migaloo is white. It is possible he has a condition called leucism, which is a loss of skin pigment. This is a different condition to albinism*.

We do know that he is male. A recording of his song indicated he was male and in 2004 scientists from Southern Cross University in NSW confirmed he was a male after they collected and tested some skin he naturally shed into the water.

The skin means the scientists also have Migaloo’s DNA*, which means they could use this in the future to know if Migaloo is a father to other whales.

SO MANY WHALES!
Migaloo is one of 35,000 whales expected to come past the Australian coast — including off Victoria, South Australia, Tasmania and Western Australia — on their annual migration from summer feeding in Antarctica to warmer northern waters for winter. Whales often come close to and play around boats, though there are laws in place to stop boats approaching whales. In Queensland, for instance, boats must not approach closer than 100m, or 300m away in front of or behind a whale. Picture: Fraser Coast Tourism and Events

A boating tour company called Out of the Blue Adventures was out on a pre-season cruise from Ballina to Cape Byron when they spotted the breaching whales.

“All the juveniles* start heading up around this time and then the older males will come through shortly after.”

Mr Suchs said the best time for whale watching is towards the end of July, before the whales begin migrating south in August and September.

The end of July is also the perfect time to see Migaloo.

“Migaloo typically comes past Byron around the 25th of July,” Mr Suchs said.

Whales often stay and play for a while around Hervey Bay and nearby Fraser Island and the area has long been the unofficial whale watching capital of Australia. World Cetacean* Alliance is made up of more than 100 not-for-profit organisations around the world that work to protect marine mammals. The alliance has developed a system of accreditation* for regions to be recognised as Whale Heritage Sites.

Accreditation as a Whale Heritage Site shows that an area does a great job protecting whales, dolphins and porpoises and their habitat. It would also recognise great work in helping people learn about the marine mammals and excellence in scientific research.

The result of Hervey Bay’s bid for Whale Heritage Site recognition* is expected later in the year. Dr Vanessa Pirotta at Clovelly, NSW with a drone she uses to collect snot from whales. Picture: Richard Dobson

Dr Pirotta will be flying a waterproof drone over the top of migrating whales along the NSW coast near Sydney to collect fresh whale snot from the air above whales’ blowholes.

The technique was a great success last whale season.

Snot contains bacteria, viruses and DNA. Without having to take a boat close to a whale, Dr Pirotta can tell whether the whale is healthy and whether females are pregnant.

CLASSROOM ACTIVITIES
1. Welcome back Migaloo
Design a special “Welcome Back to Australia” card for Migaloo.

2. Extension
Why is it so important to track and study whales like Migaloo?

Write down as many reasons and examples as you can.

VCOP ACTIVITY
A Poem About Migaloo
Using the video as inspiration, write a poem about Migaloo. Watch his movements, look at his size, shape and colour, find facts in the article, then bring it all together in a beautiful poem.

Types of poems you could use:

Haiku: The simple structure of haiku makes it easy for children to imitate. Haiku contains only three lines, the first and third lines are five syllables long and the middle line has seven syllables. Haiku usually captures a single experience in nature.

Concrete: Children can get creative with concrete poems, which display a picture of the theme of the poem in the actual structure of the poem. For example, a poem about a tree could take the shape of an actual tree. A poem about a breeze could meander all over the page like a breeze might.

Narrative Poetry: Combine plots with verse. These narratives can be long or brief and may include or exclude a rhyme scheme. These poems can also cover a variety of different subjects. For example, epic poems are a type of narrative poetry that describes the heroics of a certain individual. Idylls, on the other hand, are narratives that describe events in country settings.

Free Verse Poems: Free verse poems are great for kids because there are no rules to follow. The idea is to state your emotions or story across several lines in a meaningful way.

HAVE YOUR SAY: Have you or anyone you know seen a whale up close?
No one-word answers. Use full sentences to explain your thinking. No comments will be published until approved by editors.