Umqali the southern white rhino has given birth to a calf at Monarto Safari Park in South Australia.

The female calf, which doesn’t yet have a name, was born at 7.10pm on Wednesday July 22, the zoo announced.

Keepers watched the birth on camera and said the calf arrived safely and was soon feeding. The keepers got to see Umqali and her calf in person early the next morning.

The calf is the seventh born to Umqali and one of six southern white rhinoceros currently at the zoo.

Rhino baby does a zoomie at Monarto Zoo

Monarto Safari Park Director Peter Clark said the newborn calf was a significant arrival for a species that is threatened with extinction.

“Nearly 10,000 animals have been lost to poaching* in the wild in just the last 10 years with numbers surviving now thought to be less than 15,000,” Mr Clark said.

Senior Ungulate* Keeper Mark Mills said the team had been waiting for the birth for the past few weeks and knew on Wednesday it would happen soon: “On Wednesday afternoon she was noticeably vocal* towards the other female rhinos who rightly gave her the space she needed.”

“We are so happy that she has arrived safely and so far all the signs are very positive.

“The young rhino is absolutely gorgeous and, like all little rhinos, looks like she has a lot of growing to do to catch up with her large ears and feet!” Mr Mills said.

“This calf will play her part in helping to ensure the survival of white rhinos by boosting the numbers of animals held safely in Australia and New Zealand. We hope Monarto will eventually become home for up to 40 rhino, most of which will live in our new and very large Wild Africa safari experience area. This sanctuary will create a viable rhino insurance population outside of Africa should the species become extinct.”

They are herbivorous mammals that can weigh up to 2.5 tonnes and can run at 55kmh.

Black, Javan and Sumatran rhinos are listed by the IUCN* as critically endangered; white rhinos, near threatened; Indian rhinos, vulnerable.

Most rhinos are solitary animals, except white rhinos, which may live in a group called a crash.

The most noticeable difference between black and white rhinos is their upper lip. White rhinos have a square lip and black rhinos have a pointed lip, which helps them browse for leaves on trees. 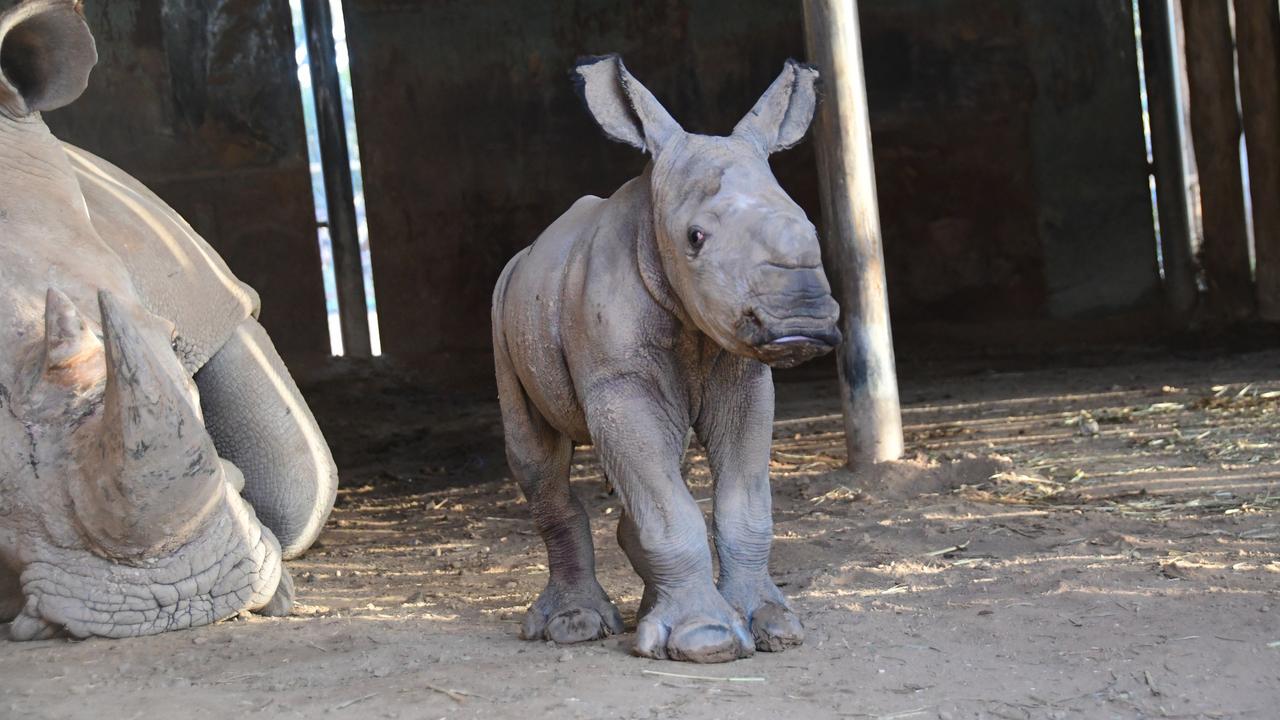 The baby rhino has a square upper lip for grazing on grass, a feature of white rhinos. She also has a big head and feet to grow into. Picture: Geoff Brooks/ZoosSA

Virtual safaris into the wild, from home

Checking cheetah poo at the zoo

CLASSROOM ACTIVITIES
1. Birth Notice
When a new baby is born often the parents place a birth notice in a newspaper or now more commonly on social media to announce the birth to their family and friends. Details about the birth (date, time) and about the baby (gender, name, weight, cute features (for example, lots of hair or dimpled cheek, etc) are generally included along with how the parents (and siblings) are feeling about their new baby.

Write a birth notice on behalf of South Australia’s Monarto Safari Park including as many of the above details if possible.

Present your birth notice neatly and include a picture of the new arrival.

What do you know about rhinoceroses?

Create a mind map with the word rhinoceros in the middle in a box or circle. Draw lines from ‘rhinoceros’ and write information that you know about this type of animal.

For example: you might know that there are several species of rhinos (white, black, etc)

Once you have included all the information that you know from prior knowledge or from the article. Write 3 questions about rhinoceroses that you would like to find out.

Use the internet or books from the library (if you have access to one) to find answers to your questions.

HAVE YOUR SAY: What would you like to name the calf?
No one-word answers. Use full sentences to explain your thinking. No comments will be published until approved by editors.