Skippy starring in the TV show with actor Garry Pankhurst.

Have you ever wondered why adults call every kangaroo Skippy?

It’s because of a small TV show called Skippy the Bush Kangaroo, which was created 50 years ago and became one of Australia’s greatest television success stories.

Skippy starred Ed Deveraux as park ranger* Matt Hammond and was supported by Garry Pankhurst as his 10-year-old son Sonny, Ken James as his elder son Mark, Tony Bonner as helicopter pilot Jerry King and Liza Goddard as Clancy Merrick, who stayed with the Hammonds to pursue music studies after her ranger dad had to move for work.

But the star of the show was Skippy, a female eastern grey kangaroo — and she was pretty remarkable. 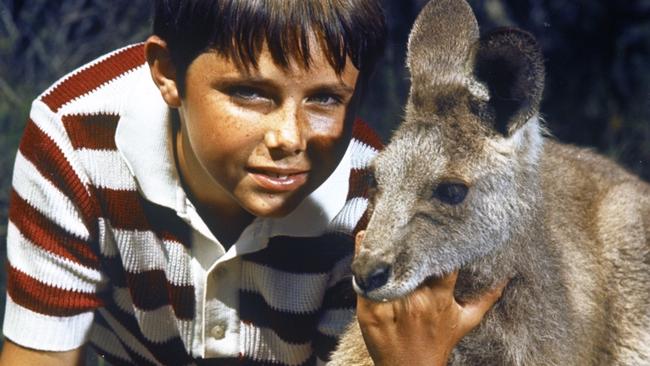 Actor Gary Pankhurst with a kangaroo in a scene from Skippy.

Capable of almost thinking like a human, she could understand everyone, open doors, carry things in her pouch, cross streams on narrow logs, stop villains, rescue lost bushwalkers, untie ropes, collect the mail and even operate the radio.

It was common for Skippy to make a ‘click, click, click” sound to alert the Hammonds to someone in danger and they’d say something like: “What’s that, Skip? There’s a man trapped down a mine ….”

Skippy befriended* Sonny following the death of his mother, and was an inseparable* part of the Hammond family.

“It was based reasonably heavily on Flipper. If you look at the storylines, you’ve got a widower* father with two sons working as a park ranger and you’ve got an animal that’s smarter than any of them. It’s basically the same format with a dolphin transplanted* for a kangaroo,” he says. Skippy, the bush kangaroo, star of the TV series, was surrounded by young and not so young admirers soon after her arrival at Brisbane Airport in 1969.

Skippy debuted* in February 1968 on Channel 9 in Melbourne and Sydney in the prized 7pm timeslot – and it took off like a rocket.

Skippy was a worldwide hit, even cracking the American market on 160 stations.

“Once it got into syndication*, it spread like wildfire. It just exploded, and it was the first Australian show to have a heavy range of merchandising* as well,” Mr Keating says.

”They had their own books. They had badges and buttons. You could get special Skippy bank accounts at one of the banks. There was a club, there were outings. Dolls, books, quite a few records, dinner plates, Thermos flasks. It was incredible.” Does all this talk about the show make you feel like watching an episode of Skippy? You still can. Skippy is still on TV each week in the early hours of the morning on Channel 9.

park ranger: a person in charge of a park

befriended: made friends with

historian: someone who studies the history of something

widower: a man whose wife has died and he hasn’t remarried

transplanted: move to another location

debuted: show in public for the first time

syndication: the sale of a program for broadcasting by lots of TV stations

merchandising: branded products used to promote something or someone

Write a quick profile for each of the characters in Skippy the Bush Kangaroo. Include the name of each character, who they were played by and a sentence or two about them. Make sure each of your profiles follows a consistent format.

Extension: Draw a diagram that is similar to a family tree that shows the relationships between all of the characters.

Write a script for a modern day episode of Skippy the Bush Kangaroo. Include the same characters as mentioned in the article and make sure the plot fits in with the original type of storylines used, but also include some things that make it clear that it is the year 2018. Perhaps the characters are using modern technology or mention a current celebrity or trend.

Extension: If Skippy were to become a popular show again, what type of modern merchandise do you think people would buy? Make a list.

Please do not use one-word answers. Explain exactly what you enjoyed about the article. Use lots of adjectives.