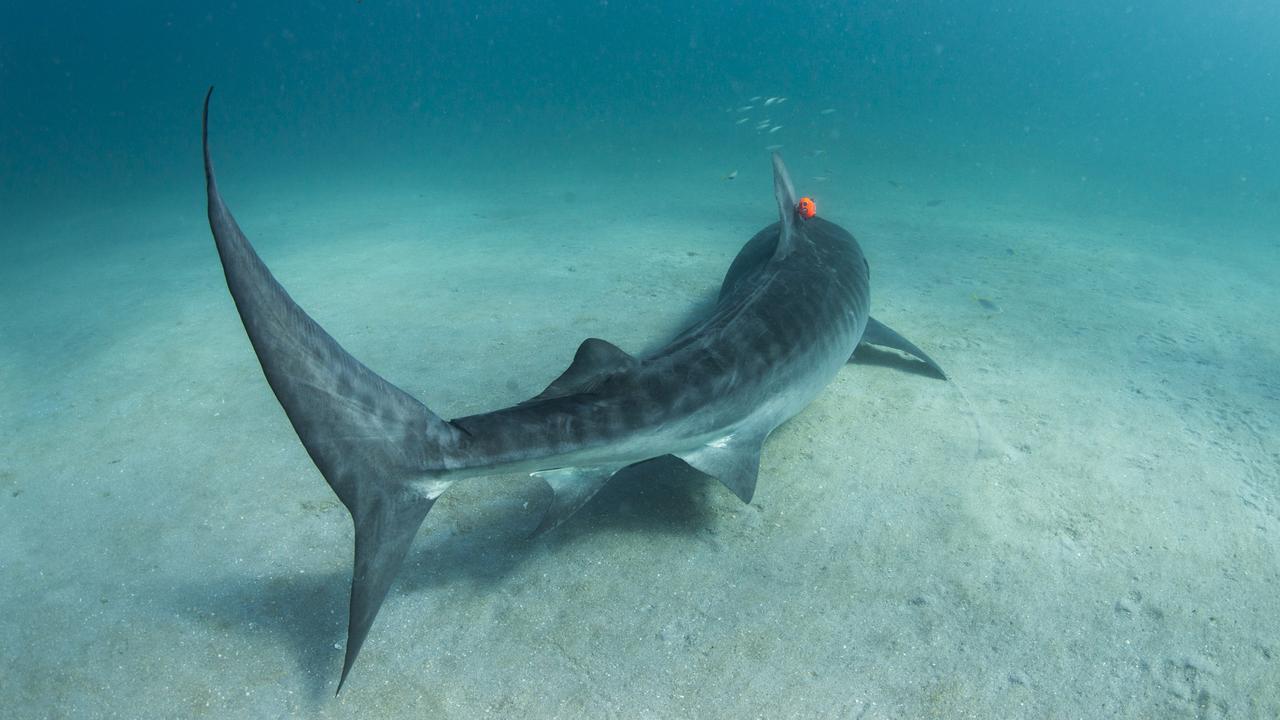 A tiger shark goes about its underwater business with a video camera and sensor fitted to its fin, allowing scientists to understand more about its behaviour at Ningaloo Reef in Western Australia. Picture: Alex Kydd

Cameras fitted to tiger sharks are giving scientists an unprecedented* look into the life and death struggles of the predators and their prey.

Small video cameras have been attached to the fins of tiger sharks at Ningaloo Reef in Western Australia.

And for the first time, this footage has been combined with knowledge about the structure of the eyes of tiger sharks to develop a “virtual* visual system” that provides a view of life under water as the sharks see it. Scientists hold a tiger shark before fitting it with a camera. Picture: Alex Kydd

It has also provided new understanding into the behaviour of sea turtles and how they avoid becoming a meal for a tiger shark.

“However, when we look at the visual cues* through the visual system of the tiger shark it is in fact extremely difficult to detect the turtle and, particularly when they remain motionless, blending into the background can allow them to camouflage* themselves from attack.” Once the camera is attached the shark is free to swim, giving scientists an unprecedented view their life under the water. Picture: Alex Kydd

This shark’s-eye view has provided some surprise insights* into the behaviour of tiger sharks, including how they hunt.

Dr Ryan said a tiger shark’s eyesight was much less clear and sharp than a human’s vision and the vision of the video cameras, which meant they had to rely on the sea turtles moving in order to see them.

“For sea turtles, their best form of defence from attack may be to simply remain still in the presence of the predator,” Dr Ryan said.

The video tags fitted to the sharks also contained sensors to track even their smallest movements, allowing swimming behaviour and the shark’s reaction to turtles to be monitored.

The study by scientists from Macquarie University, the Australian Institute of Marine Science, University of Western Australia, Murdoch University, Stanford University and Oregon State University, is the first to look at camera footage through the visual capabilities of the animal they are mounted on. The research, published in Royal Society Interface, found that although the sharks’ eyesight was poor, their vision was still important.

The researchers noticed the sharks’ behaviour changed when they saw a sea turtle. The sharks slowed down and performed lots of turns, suggesting they had entered a search mode for their prey.

“The picture that emerges through the eyes of the shark is one of almost slow-motion pursuit of a slow-moving prey, rather than a high-velocity* ambush* that we tend to think of when we see other big predators in action, such as white sharks,” said study co-author Dr Samantha Andrzejaczek, from the Hopkins Marine Station at Stanford University.

She said the sharks’ slow-motion hunt was probably the result of a lack of food in the environments they lived in, meaning they had to be careful not to use too much energy chasing prey.

The team now hopes to use its approach to study how other species see their world.

Ever wanted to peek inside a lion’s mouth?

Identify one more thing you would like to know about them and then do some research to find out.

2. Extension
The final sentence of the news article tells us that the team now hopes to use its approach to study how other species see their world. If you were part of the team, which animal would you want to study next and why?

VCOP ACTIVITY
New VR experience
Imagine if the footage of the tiger shark was sold to Google Expeditions so it could be turned into a virtual experience. You could put on a VR headset and play the video to see through the eyes of a shark. Wouldn’t that be amazing?

Make a pitch to Google about which animal you would love to have a non-invasive 360-degree camera attached to, so that they could create a unique wildlife experience for us.

Try and include any educational benefits you can think of to really enhance the value.

Share your pitch with a classmate to see what they think.