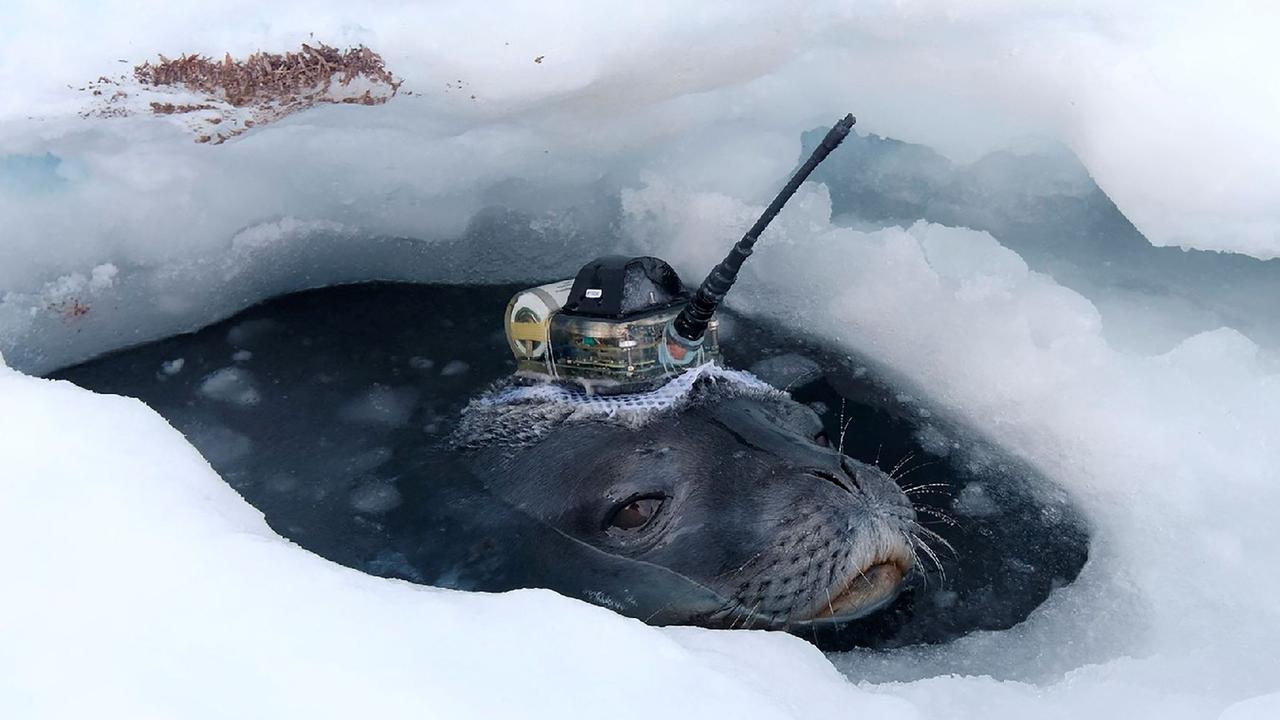 Hi-tech monitoring devices were fitted to the heads of eight Weddell seals to help Japanese researchers survey under the ice sheet during the Antarctic winter. Picture: Nobuo Kokubun, National Institute of Polar Research

A seal wearing a helmet with an antenna might look unusual, but eight Weddell seals did just that to help Japanese researchers survey the waters under the thick ice sheet in Antarctica.

The seals were recruited for a research project between March and September 2017, the Antarctic winter when harsh conditions make it extremely difficult for researchers to reach the area by ship.

Special glue was used to stick a monitoring device – weighing 580g and about the size of a small Rubik’s cube – to the head of each seal. The monitoring devices contained sensors that allowed scientists to collect observational data*, such as water temperatures and salt levels. One of the eight Weddell seals wears the hi-tech monitoring device that has helped Japanese researchers understand their Antarctic environment during winter. Picture: Nobuo Kokubun, National Institute of Polar Research

“During the summer, we can go to Antarctica on icebreakers* to conduct actual research activities, so that we can collect data there,” he said.

“But during the winter, such things cannot be done in so many places.

“However, even in such a situation, many animals such as seals are living in the area of Antarctica, so I thought we should have them collect the data.” Winter makes it difficult for icebreakers, like this Russian ship called the Kapitan Khlebnikov, to reach many parts of Antarctica.

The data successfully gathered from seven seals showed one of them had travelled as far as 633km from the coast of Japan’s Showa Station in Antarctica, while another had descended* to a depth of 700m.

Assistant Professor Kokubun said the scientists also learned from the data that warm seawater from the upper layer in the open sea reached Antarctica from March through winter that year. The water flowed below the ice, bringing in sea creatures like Antarctic krill, a major food source for seals.

Assistant Professor Kokubun aims to further examine the impact of global warming on Antarctic coastal areas by making the device small enough to fit on other animals at the South Pole such as penguins.

“The advantage with penguins is that they come back to the same place and we can collect the data from them immediately,” he said.

“Also, we can use the devices on a large number of penguins so they can cover a wide area.” Penguins, like this group of Adelie penguins, could be the next animals to wear monitors that help researchers survey Antarctica during winter.

Getting to know the mysterious blue whale

2. Extension
What other things do you think researchers could find out from attaching monitoring devices to animals? Think of a question you would like answered about an environment. Then explain what type of animal you would use to answer your question and why. Explain how you might attach a device to this animal so that the animal is not harmed and still behaves in its natural way.

Draw a picture of the animal with the device attached.

Create a conversation between two characters from the article – you may need or want to include yourself as one of the characters.