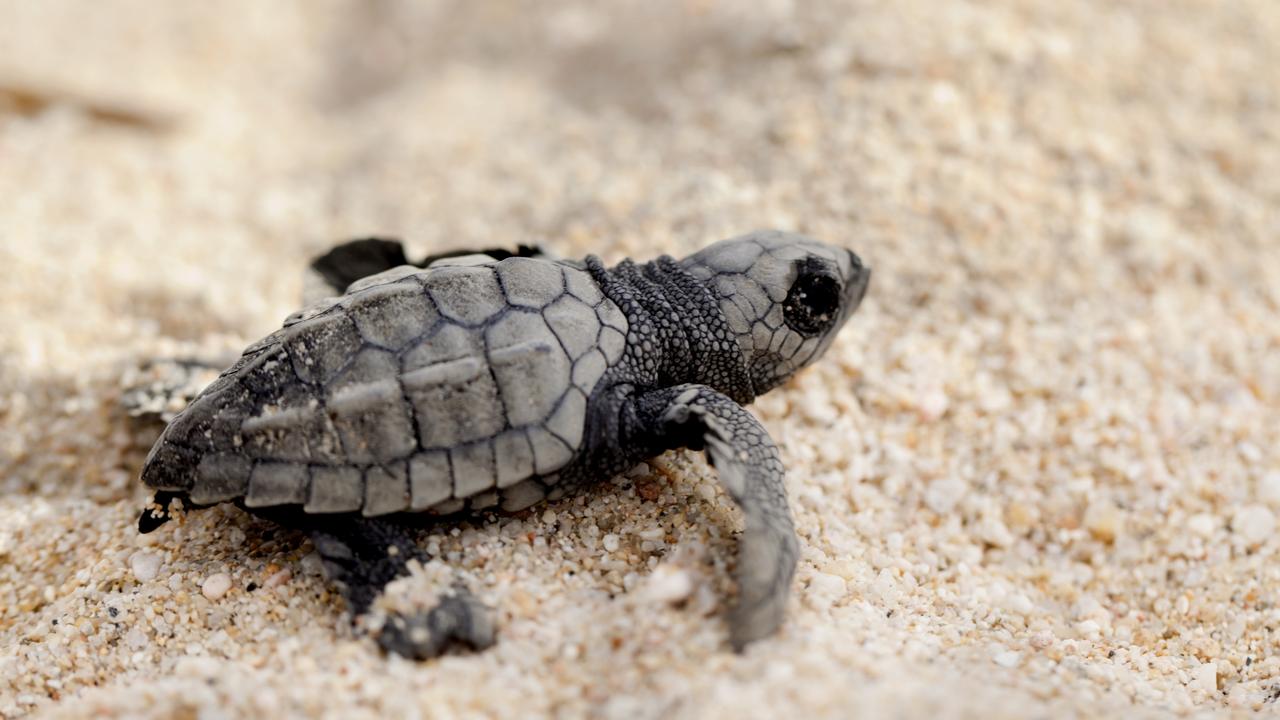 A baby olive ridley sea turtle making its way across the sand to the water. Picture: iStock

The world’s sea turtles are thriving thanks to humans being kept in isolation.

The marine creatures, which find nesting on sandy beaches difficult due to crowds and pollution, are thriving while humans are cooped up* indoors.

As the northern hemisphere enters spring, sea turtles appear to be nesting in record numbers in countries such as the United States, Costa Rica, Brazil, Thailand and India.

“There’s some silver lining for wildlife in what otherwise is a fairly catastrophic* time for humans,” David Godfrey, executive director of the Sea Turtle Conservancy, told Associated Press.

Mr Godfrey said sea turtles need to be undisturbed when nesting on beaches. They also risked being struck and killed by boats or marine rubbish.

But with the tourists gone and beachside activity on pause, the turtles are finding it easier to nest.

“All of the potential positive impacts relate to changes in human behaviour,” he told CBS News. “The chances that turtles are going to be inadvertently* struck and killed will be lower, (and) the reduced human presence on the beach also means that there will be less garbage and other plastics entering the marine environment.” A loggerhead sea turtle hatchling reaches the surf after emerging from a nest. Picture: AP

Florida has reported record numbers of nesting of loggerheads and vulnerable* leatherbacks.

“Our world has changed, but these turtles have been doing this for millions of years and it’s just reassuring and gives us hope that the world is still going on.”

Brazil is also seeing a boom* in nesting. The town of Paulista has seen hundreds of turtles hatch already this season, including 100 critically endangered* hawksbill turtles in a single day.

“It’s really beautiful because you can see the exact instant they come out of the eggs and … watch their little march across the beach,” Paulista environmental secretary Roberto Couto told The Guardian. It isn’t just sea turtles that have benefited from humans being isolated.

Smog has cleared up in New Delhi and the Himalayan mountains have been visible, canals have cleared up in Venice in Italy, and animals have roamed* more freely in towns.

“It is giving us this quite extraordinary insight into just how much of a mess we humans are making of our beautiful planet,” conservation scientist Stuart Pimm of North Carolina’s Duke University told AP.

“This is giving us an opportunity to magically see how much better it can be.”

CLASSROOM ACTIVITIES
1. Sea turtle species
There are three specific species of sea turtles that are mentioned in the news article.

Identify the three species and then find out their size when they are fully grown adults. Use this to draw a birds-eye view outline of the three species, side-by-side that is to scale. (That is, it shows their sizes in relation to one another.)

Then write down two unique features of each species.

2. Extension
On a map or globe, locate each of the places mentioned in the story where increased sea turtle nesting has been observed.

HAVE YOUR SAY: What does this story tell you about humans and their effect on sea turtles?
No one-word answers. Use full sentences to explain your thinking. No comments will show until approved by editors.