The sea monster named Kraken from Norse legends attacks a ship in this historic drawing. Giant squids feature in many stories and are usually depicted as terrifying monsters.

A giant squid with one massive eye, three hearts, blue blood and moving by jet propulsion* has been filmed by scientists searching the ocean’s midnight zone*.

The squid was lurking 760m below the surface in complete darkness when it attacked a fake jellyfish attached to the researchers’ equipment.

The scientists managed to film the squid but then had to rush back to shore to find a squid expert who could confirm they were looking at a giant squid.

The exciting find is part of the National Oceanic and Atmospheric Administration’s (NOAA) Journey into Midnight project, which is using a special camera system called the Medusa.

They are searching the deep waters in the Gulf of Mexico, near Mexico, Cuba and the US.

This technology uses red light that is undetectable to sea creatures but allows researchers to spot elusive animals and discover new ones in the pitch black ocean.

The Medusa probe had a lure called an e-jelly (short for electronic jellyfish) attached to it, which mimicked* the luminescent* defence mechanism of a jellyfish and alerted creatures such as the giant squid that a meal might be nearby.

Rare giant squid caught on video for the first time

After battling through a lightning strike and a storm, zoologist* Michael Vecchione was able to confirm remotely that the footage was indeed of a giant squid up to 3.7m long.

Edith Widder, one of the leaders of the expedition, said: “It’s got eight writhing* arms and two slashing tentacles. It has the largest eye of any animal we know of, it’s got a beak that can rip flesh.

“It has a jet propulsion system that can go backwards and forwards, blue blood, and three hearts.

“It’s an amazing, amazing life form we know almost nothing about.” 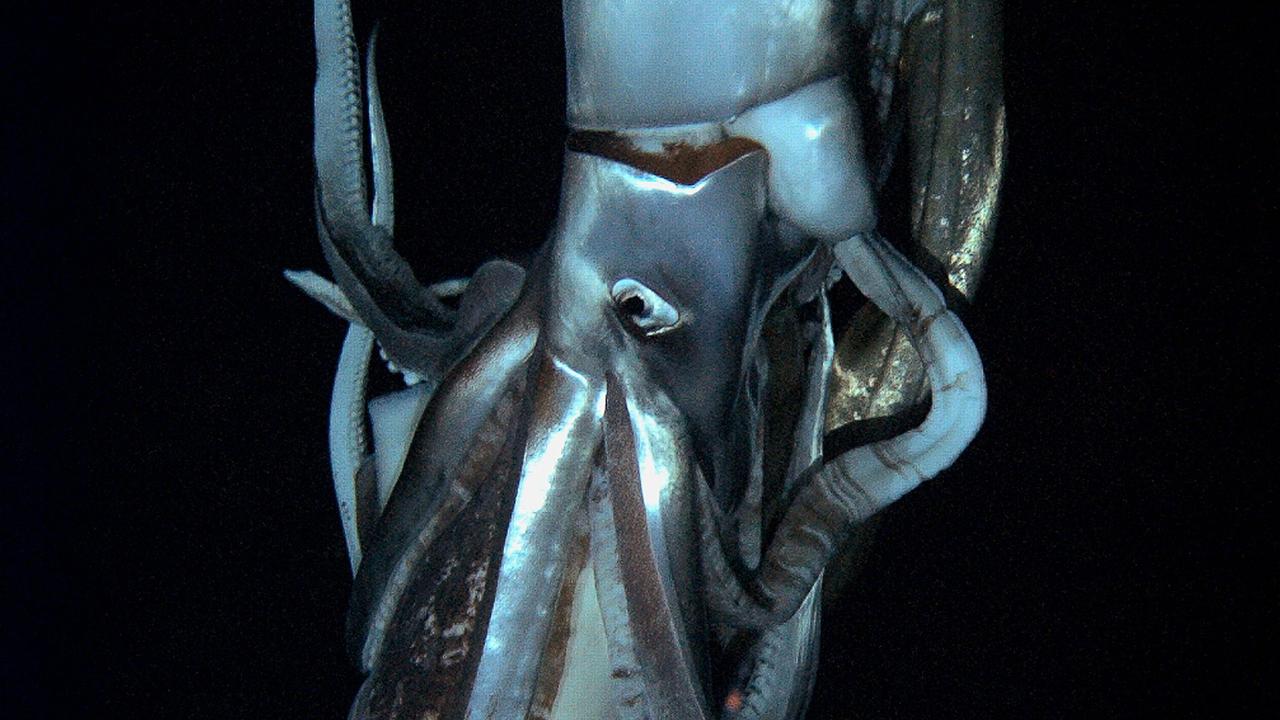 Filming a giant squid in its natural habitat is very difficult. The first film was taken in 2012 in deep sea near Japan and involved some of the same scientists using the Medusa probe.

This story first appeared in The Sun and is republished with permission.

THE MIDNIGHT ZONE
Another name for the bathyal zone or bathypelagic zone of the ocean.

It is also sometimes called the twilight or dark zone.

There is no sunlight in this zone, no known plants and fewer animals than shallower water.

The Journey into Midnight project is exploring the bathyal or midnight zone of the Gulf of Mexico.

The Gulf of Mexico is an area of ocean bordered by Mexico, Cuba and the US.

GIANT SQUIDS
This giant squid was filmed slightly shallower than the midnight zone.

They are thought to live mostly at depths from 300m to 600m but have been detected in the midnight zone around 1100m from the surface.

New research suggests they may be able to grow to 20m long. Scientists examine a giant squid weighing 245kg that was accidentally caught off the Victorian coast in 2008.

It is not known how many species of giant squids exist, but scientists have recently begun to believe that there may only be one species.

The first photographs of a giant squid were taken in 2004.

Giant squids are often depicted as terrifying monsters in books and films. A famous book called Twenty Thousand Leagues Under the Sea by Jules Verne featured a giant squid.

Scientists now believe they are not aggressive but curious and maybe even quite timid.

The mystery of the ‘monster’s’ invisible teeth

CLASSROOM ACTIVITIES
1. Squid Acrostic
Complete an acrostic poem on the giant squid. Use the information presented in the Kids News article to think of a sentence beginning with each letter that gives a fact or some information about this type of species.

2. Extension
Write a short narrative or comic strip with the giant squid being the main character. Give it a name, personality and include some of its attributes in your writing.

HAVE YOUR SAY: If you could, would you travel down to the midnight zone? What would you most like to find? What, if anything, would scare you?
No one-word answers. Use full sentences to explain your thinking. No comments will be published until approved by editors.