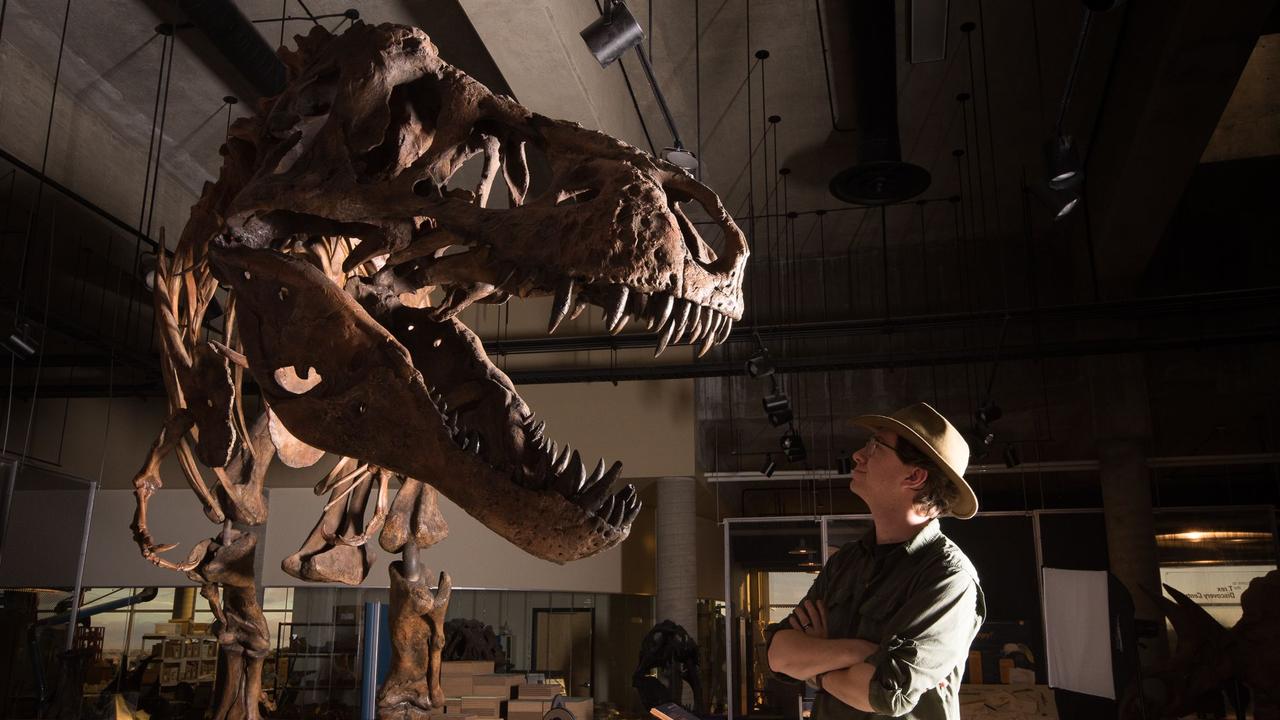 An enormous Tyrannosaurus rex dinosaur nicknamed Scotty has been unearthed, the biggest ever discovered.

Scotty’s 66-million-year-old skeleton is about 65 per cent complete and includes some of its ribs, hips and leg bones. Scotty’s leg bones are so big it is thought it could have been 13m long and weighed 8800kg, making it much larger than the biggest African elephants. The skeleton was discovered in 1991 in Saskatchewan, Canada, near the border with the US but was encased in sandstone that took many years to remove.

The fossilised remains of more than 20 individual T-rex dinosaurs are known, with a range of builds and sizes from slimmer and lankier to thicker set or stocky. Of these, Scotty is thought to be a stockier build of T-rex and is the largest, heaviest and the oldest at 28-30 years old.

The findings of the study of Scotty’s skeleton by palaeontologists at the University of Alberta, Canada, are published in the journal The Anatomical Record. 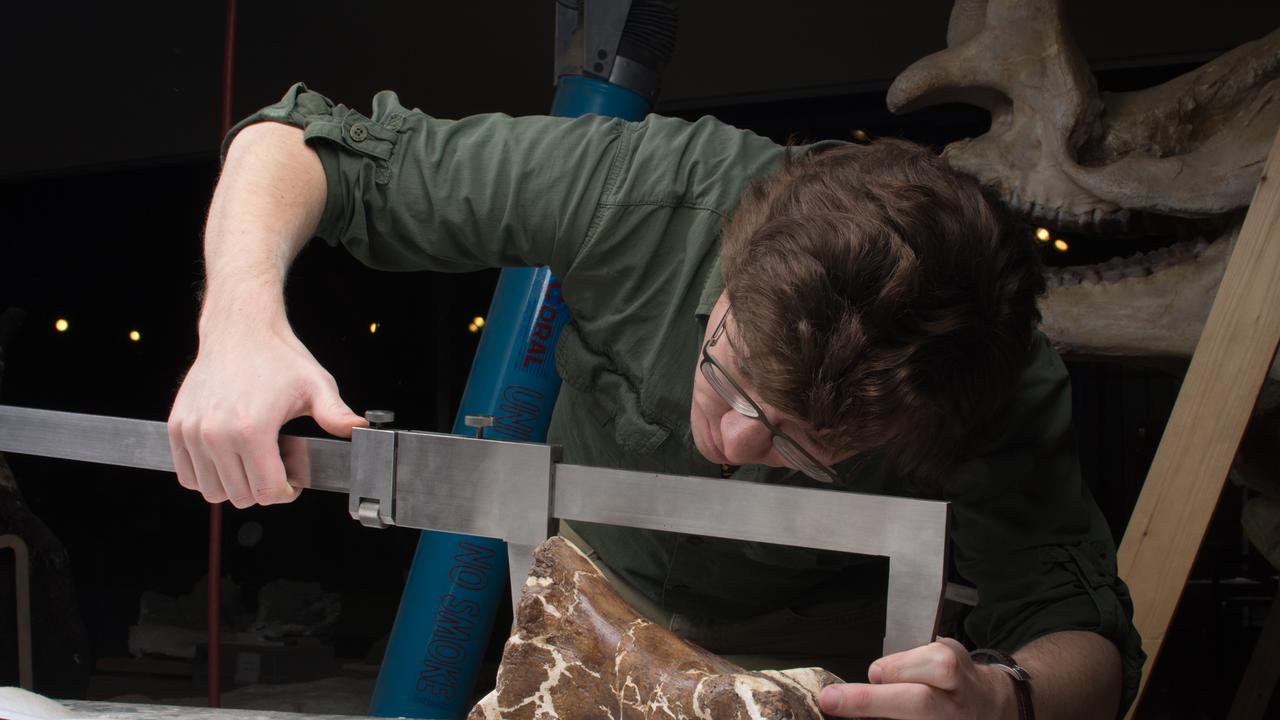 Dinosaur palaeontologist and lead researcher Scott Persons described Scotty as “the rex of rexes” in an interview with ABC, referring to his massive weight, size and age.

Scotty’s remains include a broken and healed rib, signs it had infected teeth and broken tailbones, possibly from the bite of another T-rex. 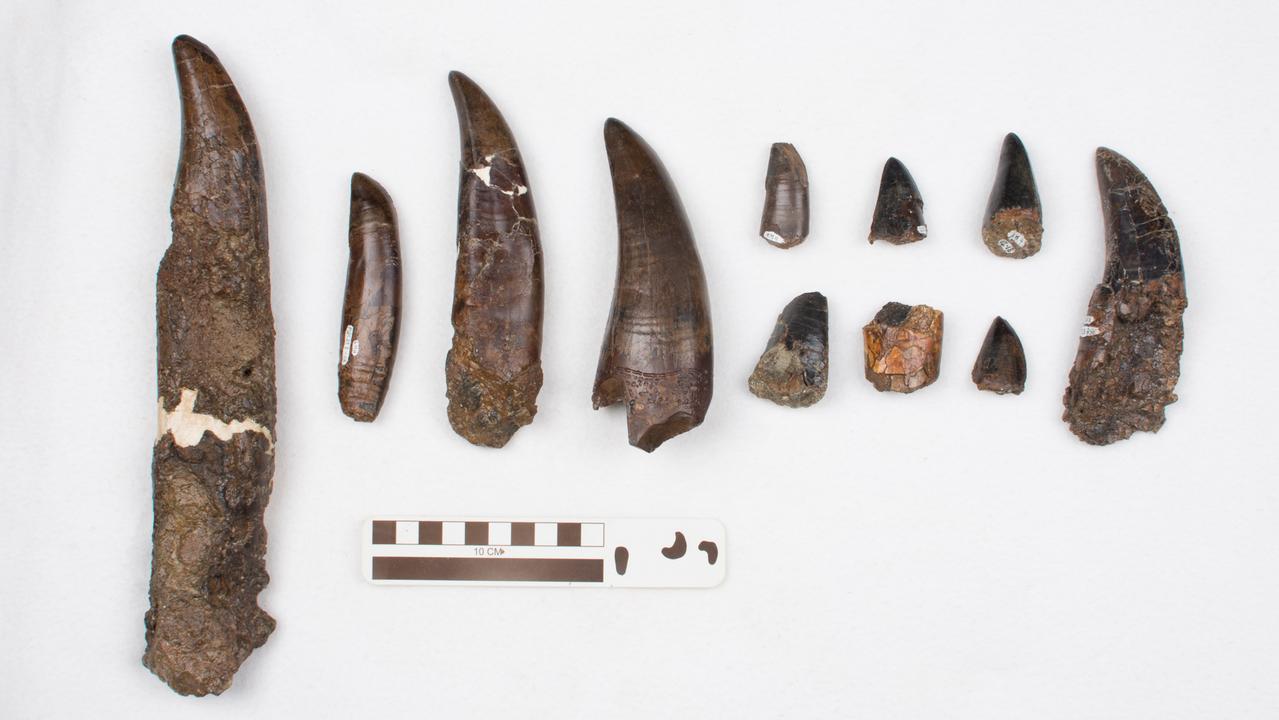 Some of Scotty’s massive teeth. Picture: AFP/University of Alberta/Amanda Kelley

TYRANNOSAURUS REX
T-rex lived in river valleys of North America until about 65 million years ago and became extinct in the mass extinctions thought to be caused by an asteroid hitting the Earth in modern-day Mexico.

It was one of the largest meat-eating dinosaurs that ever lived.

Its powerful thighs and tail helped it move quickly and its 1.5m-long skull could bore* into its prey.

It had serrated*, conical* teeth that it probably used to grip its prey, using its neck muscles to tear it apart. Its short arms may have held the prey but were too short to reach its mouth.

Scientists believe T-rex could eat up to 230kg of meat in one bite. A rampaging T-rex dinosaur in a scene from the film Jurassic World: Fallen Kingdom. Picture: supplied

How many students in your class could a Tyrannosaurus rex have eaten in one bite?

Would this Tyrannosaurus rex have fitted in the length (not height) of a bus? By how much does it fit or not fit?

How much longer is the Tyrannosaurus rex skull than your head?

Use the details in the article to help you come up with two more problems to be solved. Ensure you can answer them and then ask a partner to solve them, while you solve theirs.

HAVE YOUR SAY: If you could give Scotty a new nickname, what would it be? Why?
No one-word answers. Use full sentences to explain your thinking. No comments will be shown until approved by editors.