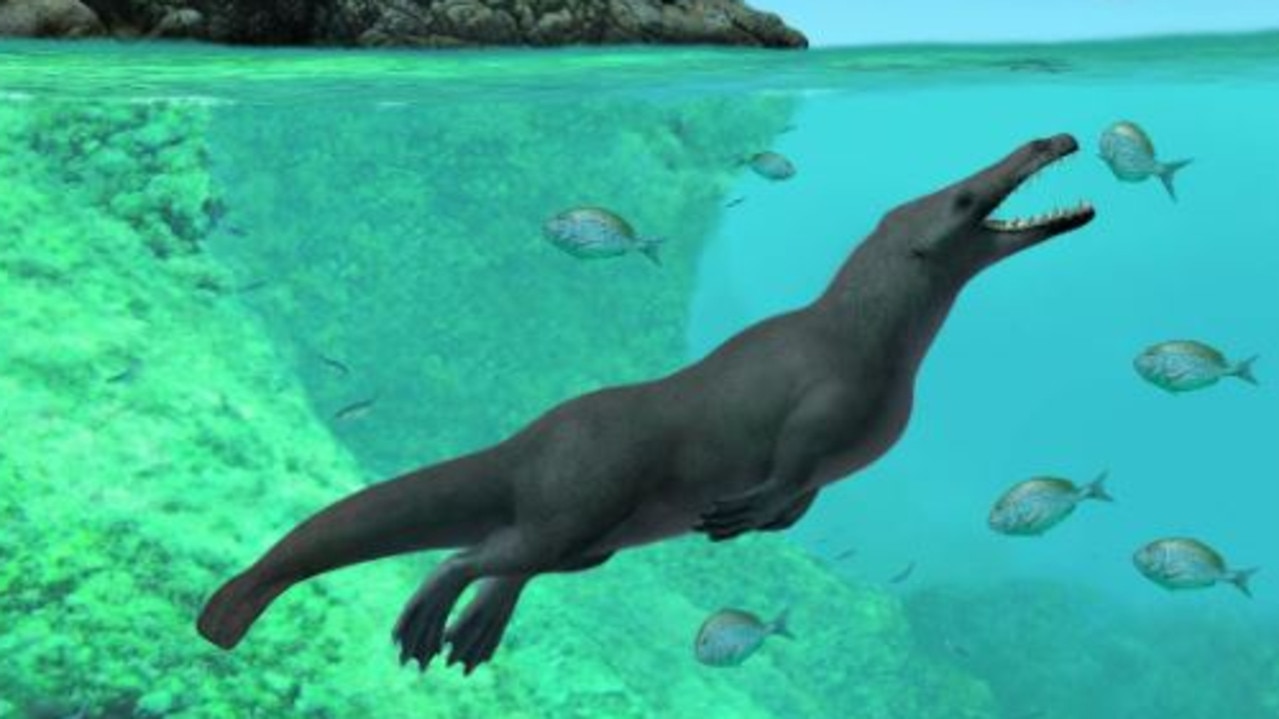 The ancient four-legged whale in the sea. Illustration: Alberto Gennari/Handout via Reuters

Scientists have found fossils* in a coastal desert of southern Peru of a four-legged whale that lived both in the sea and on land about 43 million years ago.

Its four limbs were able to hold its weight on land, meaning Peregocetus could return to the rocky coast to rest and perhaps give birth while spending much of its time at sea. The ancient four-legged whale on land.

Its feet and hands had small hooves and were probably webbed* to help with swimming. With long fingers and toes, and relatively slender limbs, moving around on land may not have been easy.

Its long snout* and large, strong teeth made Peregocetus an expert at catching medium-size prey like fish.

“We think that it was feeding in the water, and that its underwater locomotion* was easier than that on land,” said Royal Belgian Institute of Natural Sciences palaeontologist* Olivier Lambert, who led the research published in the journal Current Biology.

“Some vertebrae* of the tail region share strong similarities with semi-aquatic* mammals like otters, indicating the tail was predominantly* used for underwater locomotion,” Lambert added.

The evolution of whales was poorly understood until the 1990s when fossils of the earliest whales were found. Various fossils have shown that whales evolved a bit more than 50 million years ago in Pakistan and India from hoofed, land-dwelling mammals distantly related to hippopotamuses and about the size of a medium-sized dog. It took millions of years for them to spread around the world.

Peregocetus represents the most complete four-footed whale skeleton outside India and Pakistan, and the first known from the Pacific region and the Southern Hemisphere.

Its presence in Peru, Prof Lambert said, suggests four-legged whales spread from South Asia to North Africa, then crossed the South Atlantic to reach the New World. Peregocetus shows that the first whales to reach the Americas still had the ability to move on land.

Over time, their front limbs changed into flippers. The hind limbs eventually became functionless*. It was not until about 40 million years ago that whales evolved into pure marine animals, then split into the two groups alive today: filter-feeding baleen whales and toothed whales like dolphins and orcas.

Fold or rule a sheet of paper so that it has three sections. Based on the descriptions given, begin by drawing a picture of whales 40-50 million years ago. Then draw a picture of whales today (remembering there are now filter-feeding and toothed whales). Complete your sequence by drawing a picture that shows your prediction of what whales may evolve to look like in another 40-50 million years. Write a paragraph to go with your picture that explain how you think they may change and the reasons why you think they will evolve in this way.

2. Extension
Whales are not the only animals to have evolved over time. Investigate evolution further by finding out and recording some facts about the evolution of humans.

VCOP ACTIVITY
Vinny Vocabulary has gone crazy in this article and it’s full of high-level language. Get out your yellow highlighter or pencil and see how many great words and phrases you can find.

Pick 3 to recycle into new sentences and 1 you can write a kid-friendly definition for.  How many can you find?

Remember they don’t have to be glossary words to be wow words!

HAVE YOUR SAY: What is your favourite type of whale? Why?
No one-word answers. Use full sentences to explain your thinking. No comments will show until approved by editors.