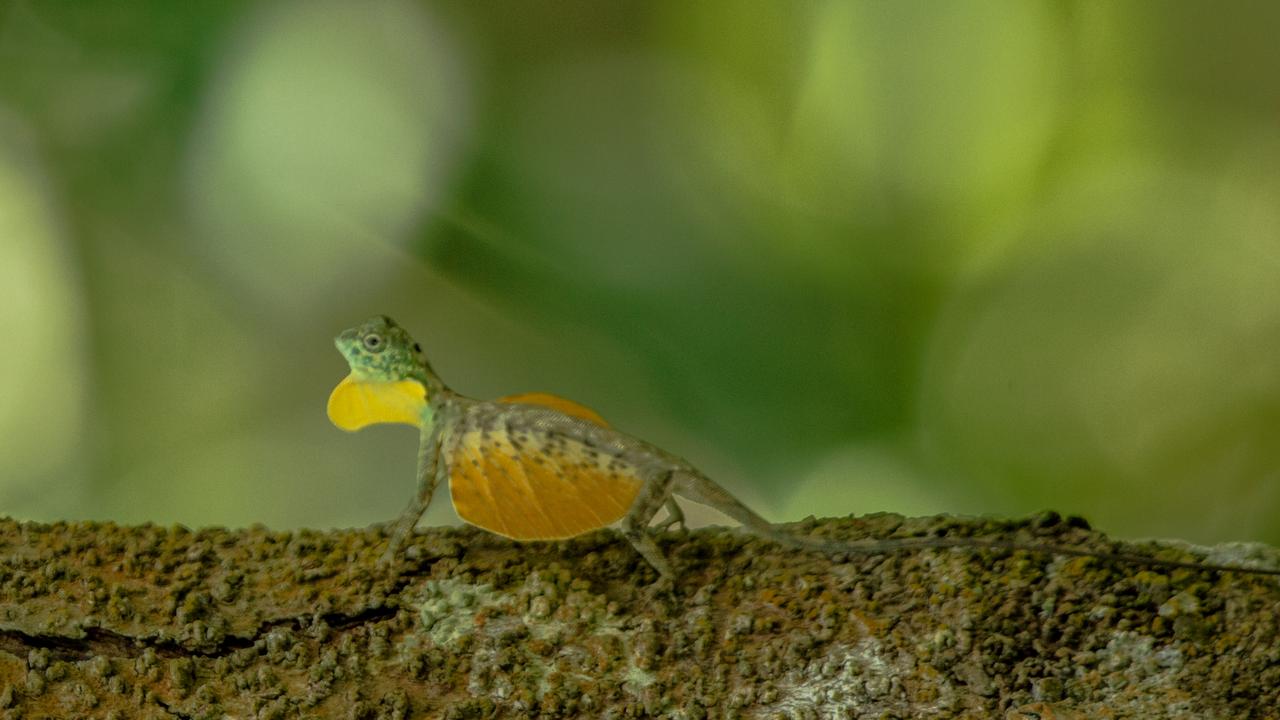 A real Draco lizard on a tree on Sulawesi, an Indonesian island east of Borneo. Picture: iStock

Scientists have used robotic lizards to solve the puzzle of why some predators overlook certain species of prey which could make an easy meal in the wild.

UNSW evolutionary ecologist Terry Ord led a research team of scientists to Borneo in 2018 in an attempt to answer the question, with robotic lizards providing the unlikely key.

They found predators avoided the robotic prey that looked the most unusual, despite these standing out the most in the environment.

Instead, the robotic prey that blended in was frequently attacked.

“On the face of it a predator should really go for anything,” Dr Ord said. “But at the heart of our research was this paradox* of why predators avoid conspicuous*-looking prey, which could easily be objects of predation*, and go for something potentially harder to find and less obvious.” Hundreds of robotic lizard like this one were placed in trees. Picture: Terry Ord, UNSW

For more than three months, Dr Ord’s research team worked to build and program robotic Draco lizards – a variety of lizard found across South East Asia and similar to the Australian skink.

The team programmed thousands of robots which could perform different actions, sounds and gestures that Dr Ord described as either “conspicuous or cryptic* behaviours”.

“Once we finished the manufacturing stages we covered the lizards in a plasticine mould, so we could easily detect the species of predator that attacked them, and then we deployed them in the trees and the wild in Borneo,” Dr Ord explained.

He said it became clear over the course of four field trips that predators – such as snakes, monitor lizards, large rats, birds and cats – were avoiding prey that looked unusual, including prey that obviously stood out in their environment.

“Instead what we found was that cryptic robotic prey (those who camouflaged into the environment and did not stand out) were frequently attacked because these prey behaved and looked more familiar to predators,” Dr Ord said.

“The classic expectation is that standing out in the environment increases predation … But many prey species are not cryptic, and extravagance* seems to be the norm for many animals that rely on conspicuous communication for finding a mate and for reproduction.”

Dr Ord argued that predators were conservative* by nature, especially when it came to considering what they wanted to eat, and observing anything they perceived as unfamiliar or unusual.

“There is something fascinating in their genetic makeup that tells them they should avoid certain colours, sounds and features, which we think would make them easy picking, but actually have the exact opposite effect,” he said.

The group’s research findings have now been published in the academic journal, Proceedings of the Royal Society B.

CLASSROOM ACTIVITIES
1. Standing out, blending in
Create a two-column table with the headings “Standing out” and “Blending in.” In your table write the names of at least five animals that try to blend in with their surroundings using camouflage, and the names of at least five animals who have appearances that cause them to stand out in their environments. (If you can, try to include a variety of types of animals – eg. insects, reptiles, amphibians, fish, birds, mammals, etc.)

Choose one animal from your list to research. Draw the animal and write a paragraph to explain the reasons for its “standing out” or “blending in” appearance.

2. Extension
Scientific knowledge is built upon over time. Each piece of new knowledge leads to new questions and further research. Write down some questions that this new knowledge raised for you. Then, describe an experiment that you think could be conducted to answer one of your questions.

VCOP ACTIVITY
Down-Level It
When you up-level a sentence, you do things to it to improve it: make it more interesting or more complex.

Go through the article and find a sentence or two that is complex, or hard to read. Ask an adult what it means, or try and look up some of the words in the glossary.

Once you know what it means, see if you can re-write it in a simpler way – down-level it.