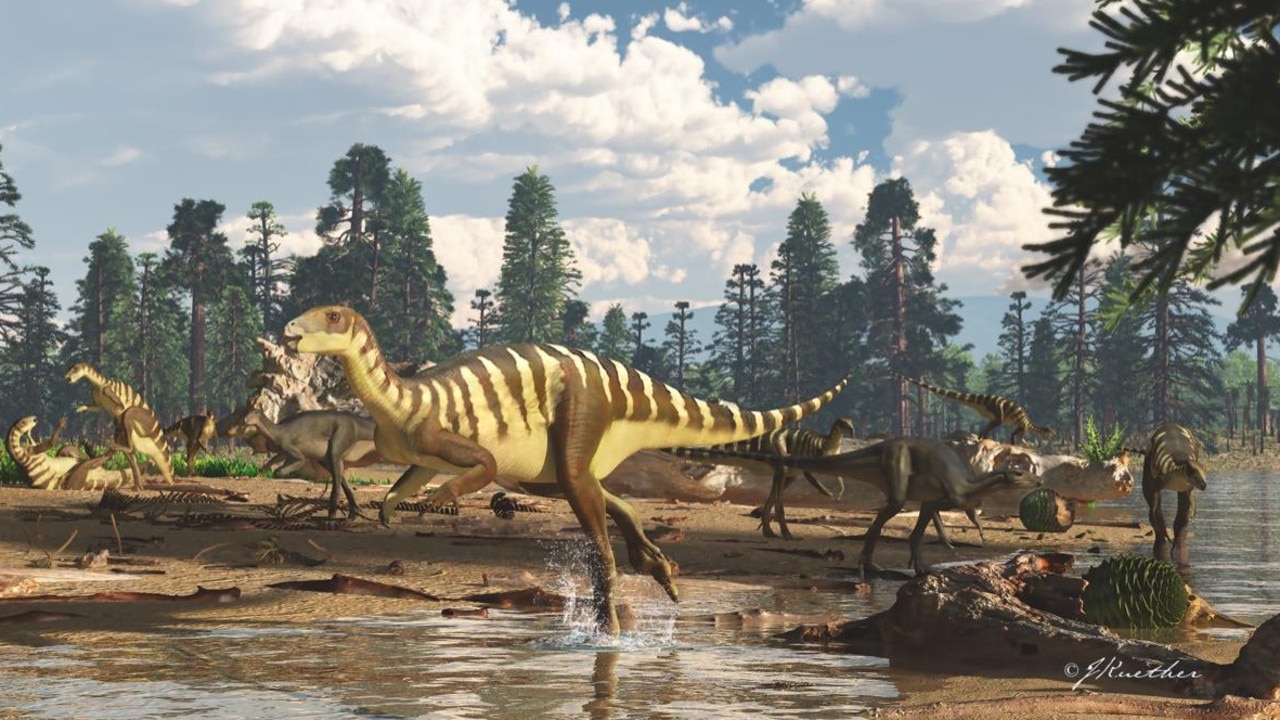 A recreation of Galleonosaurus dorisae and its Cretaceous environment. Picture: James Kuether

Millions of years before wallabies, a wallaby-sized dinosaur was running around a long-vanished valley between Australia and Antarctica.

Galleonosaurus ran upright on powerful hind legs in the vast forested floodplain of the rift* valley between the slowly tearing-apart continents.

Dr Herne and his colleagues identified the dinosaur from five fossilised upper jaws found in rocks.

Unusually, the fossilised jaws include young to mature individuals — “the first time an age range has been identified from the jaws of an Australian dinosaur”, Dr Herne said.

Galleonosaurus refers to the shape of the upper jaw, resembling the upturned hull* of a sailing ship called a galleon. Dorisae honours the work of Dr Doris Seegets-Villiers, who researched the palaeontology of the area where the fossils were discovered. It is the fifth small-bodied ornithopod* dinosaur named from Victoria. This diversity of these ornithopods, not seen anywhere else in the world, paints a picture of an environment especially suited to these small dinosaurs.

At the time of Galleonosaurus, sediments* from a 4000km-long range of large, actively erupting volcanoes along the eastern edge of Australia were carried westward by large rivers into the Australian-Antarctic rift valley.

As sediment washed down the rivers they picked up and encased the bones of dinosaurs, other vertebrates* and fallen trees. 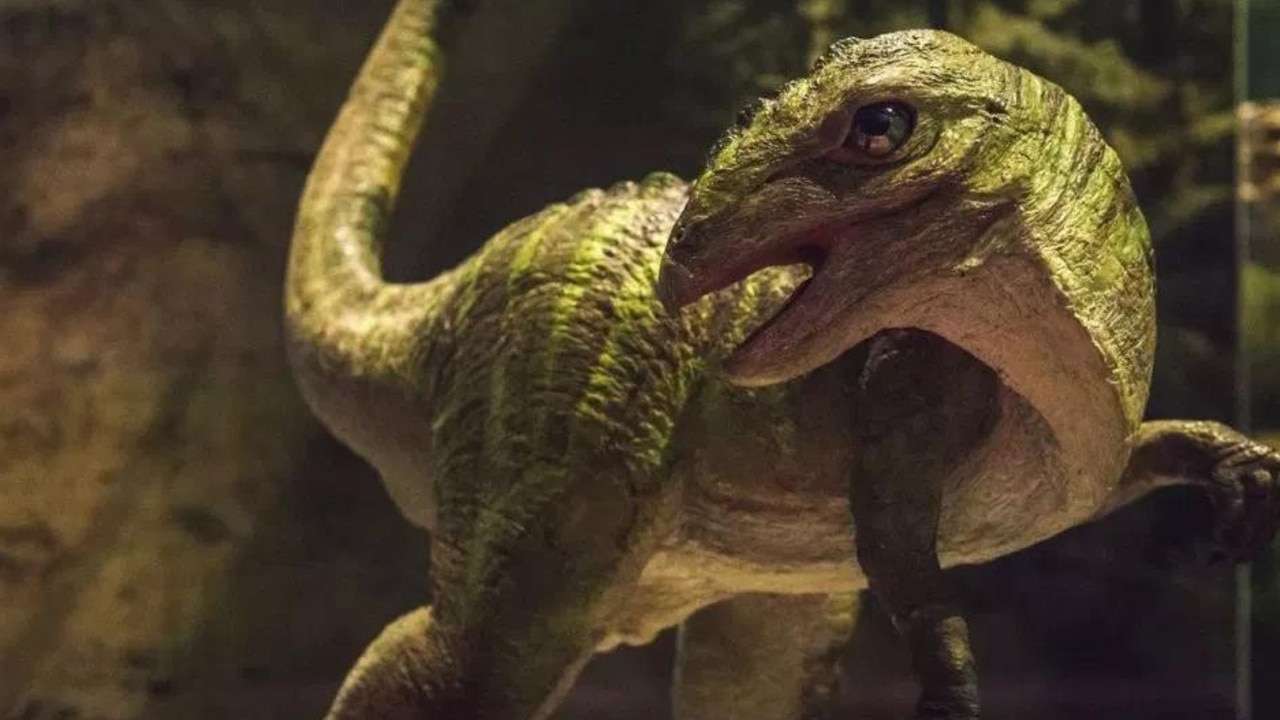 Dr Herne’s study reveals that the ornithopods from Victoria are closely related to those found in Patagonia, South America.

“We are steadily building a picture of terrestrial* dinosaur interchange between the shifting Gondwanan continents of Australia, South America and Antarctica during the Cretaceous* period.”

The jaws of Galleonosaurus were discovered by volunteers of Monash University’s Dinosaur Dreaming project with Museums Victoria, during excavations near the town of Inverloch.

The most complete jaw and the key specimen of Galleonosaurus dorisae was discovered in 2008 by local fossil hunter Gerry Kool. Gerry and his wife Lesley have been organising the Dinosaur Dreaming excavations along the Victorian coast for 25 years. Lesley Kool on a beach near Inverloch that has become one of Victoria’s finest fossil sites. She is holding a part of the jawbone of Koolasuchus cleelandi, a dinosaur named after her.

Dr Herne’s analysis of the Galleonosaurus fossils was helped by rapidly advancing technologies, such as 3D micro-CT scanning and 3D printing.

“These techniques are helping us to delve deeper into the mysterious world of dinosaur ecology,” Dr Herne said, “what they ate, how they moved and how they coexisted* — and their evolutionary* relationships with dinosaurs from other continents.”

His find is reported in the Journal of Palaeontology.

This is an edited version of a story published by UNE and reproduced here with permission.

VIDEO: How to make a paper dinosaur headpiece

CLASSROOM ACTIVITIES
1. No Words!
Create an interesting information sheet about Galleonosaurus dorisae. You are not allowed to use words.

2. Extension
Why is it important for us to learn about dinosaurs that lived so long ago? Plan and write a piece of persuasive writing that will convince your reader that the work of palaeontologists is very important.

HAVE YOUR SAY: What would you have called Galleonosaurus dorisae if you had discovered it? Why?
No one-word answers. Use full sentences to explain your thinking. Comments will not show until approved by editors.