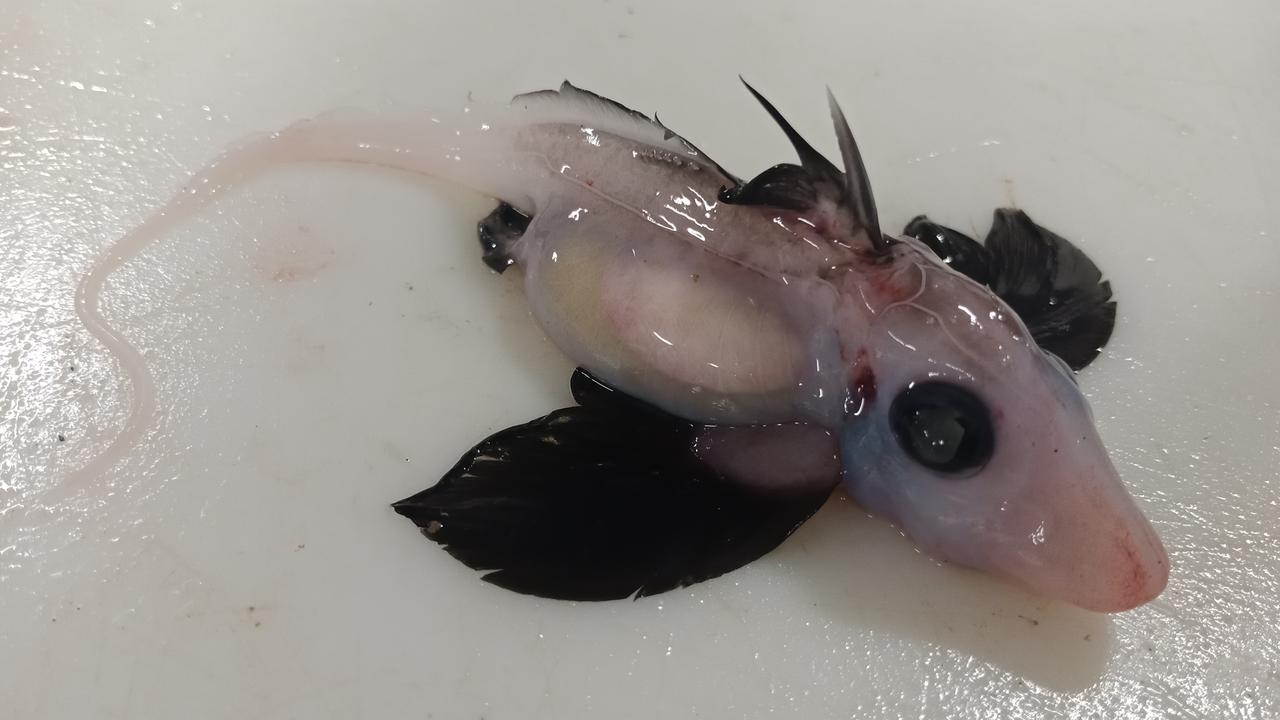 This rare baby ghost shark was found at a depth of 1200m off the east coast of New Zealand’s South Island. Picture: Brit Finucci

It looks like an alien from outer space and it’s almost as rare! This weird creature is a baby ghost shark that was found by scientists during a marine survey off the New Zealand coast.

Ghost sharks, also known as chimaeras, are not really sharks but are related to sharks, with both having skeletons made of cartilage*, rather than bone.

Not much is known about these mysterious marine creatures because they usually live at depths of up to 1830m, largely inaccessible* to researchers.

“What we do know tends to come from the large adults which are usually a metre, a metre-and-a-half in length, so finding one that actually kind of just sits in the palm of my hand is incredibly uncommon,” said Brit Finucci, a scientist at New Zealand’s National Institute of Water and Atmospheric Research. Scientists don’t have much information about ghost sharks but most of what they do know comes from adults like this one, which was found in waters off Indonesia in 2010. Picture: AP Photo/NOAA Okeanos Explorer Program

The newly hatched, or neonate, ghost shark was found at a depth of 1200m off the east coast of New Zealand’s South Island, Dr Finucci said.

Photos of the baby ghost shark show black fins connected to a body of translucent* skin with a wispy white tail and black eyes.

“I thought it was cool, other people on the boat not so much,” Dr Finucci laughed.

“I knew right away it was just something different that we don’t generally come across, so I grabbed it and took a couple of photos which have now spread all over the internet.”

The creatures, which are also called ratfish, rabbitfish, elephant fish or spookfish, have large heads and oversized eyes compared to the size of their body. Ghost shark embryos* develop in egg capsules laid on the sea floor, feeding off a yolk until they are ready to hatch.

“You can tell this ghost shark recently hatched because it has a full belly of egg yolk,” Dr Finucci said.

“It’s quite astonishing. Most deepwater ghost sharks are known adult specimens; neonates are infrequently reported, so we know very little about them.”

Dr Finucci said the “very rare and exciting find” would give some insight into the species.

“Finding this ghost shark will help us better understand the biology* and ecology* of this mysterious group of deepwater fish,” she said.

CLASSROOM ACTIVITIES
1. Animal profile
Create a one-page animal profile for the ghost shark. Include pictures, the different names it goes by, details on its habitat, diet and appearance, as well as any other key details that you think are important.

2. Extension
Which of the chimaera’s other names do you think is most suited to it? Choose one and explain why this name suits the animal best.

Then, think of some new names of your own that you think would suit it.