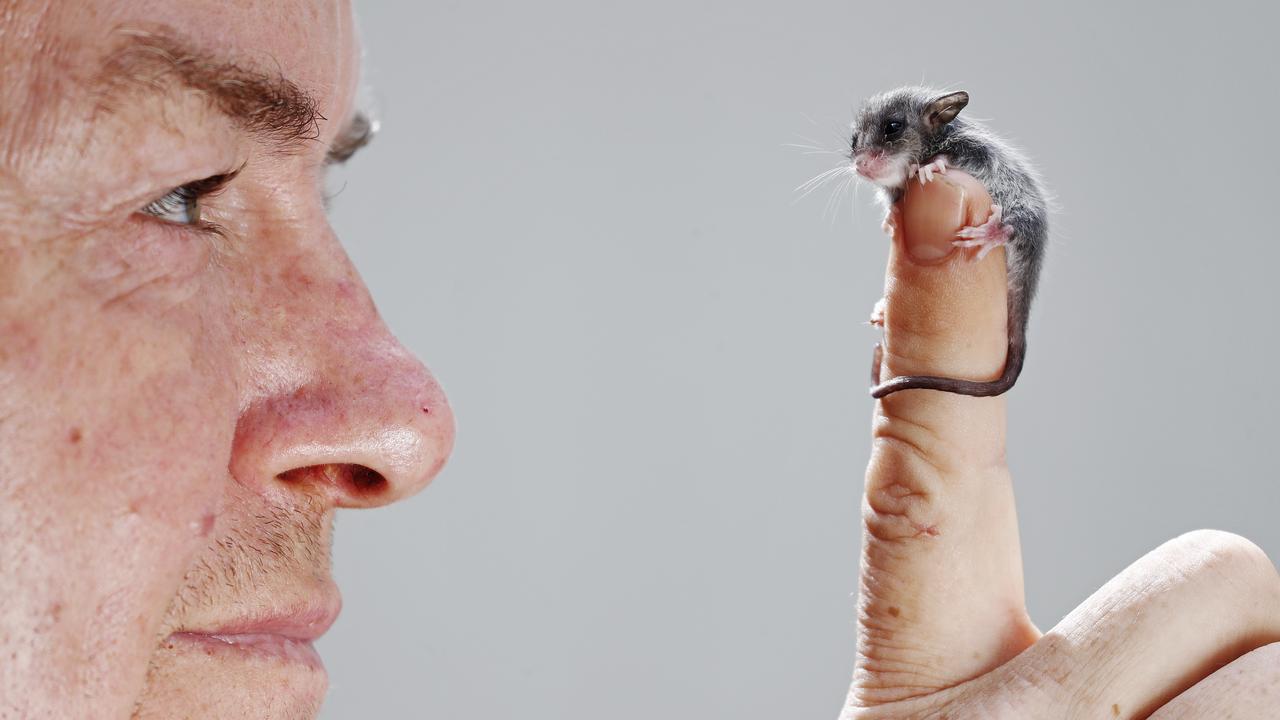 Dean Reid with one of the orphaned baby eastern pygmy possums at the Australian Reptile Park, NSW. Picture: Sam Ruttyn

She’s barely the size of a fingertip but this orphaned eastern pygmy possum is thriving* thanks to a human helping hand.

The five-week-old possum was one of two female babies abandoned by their mother at a worksite on the New South Wales Central Coast.

The two sisters were found after their nest was dislodged* and they were brought to the Australian Reptile Park three weeks ago.

Head keeper of mammals and birds Dean Reid is now caring for the tiny marsupials, feeding them a special milk formula through a tiny dropper each day. At four weeks old, they weighed just 4g. Mr Reid named the girls Bib and Bub after the gumnut baby characters created by Australian children’s author May Gibbs, and said the pair were “growing well” despite a tough start to life.

“They’re on five feeds a day and they spend most of their time sleeping in special heated pouches I’ve made for them, but they’re doing really well and growing fast,” Mr Reid said.

“I’m trying not to socialise with them too much as we ultimately want to release them once they’re old enough … but they’re very cute and well behaved, they go wherever I go.”

Pygmy possums are nocturnal animals that only grow to about 15g, surviving on flower nectar and small insects.

Mr Reid will care for Bib and Bub for another three to five months until they’ve grown enough to be released.

“People don’t realise these tiny marsupials are around because they only come out at night and they lived so high up in trees,” he said.

“I’m looking forward to releasing them back home … it’s important Aussies are aware of our bush natives and make spaces for them to build homes where they won’t be disturbed.” CLASSROOM ACTIVITIES
1. Possum Pouches
Design a habitat to protect baby pygmy possums that are found abandoned or dislodged from their nest. Try and design it with as little human interaction as possible so they can be released back into the wild at the right time.

2. Extension
Write a blog from the perspective of Bib and Bub since they’ve been dislodged from their nest. Are they set up for survival?

HAVE YOUR SAY: What orphaned wildlife would you like to care for?
No one-word answers. Use full sentences to explain your thinking. No comments will be published until approved by editors.