A dog and its handler keep watch during pooch patrol at the Opera House precinct while diners enjoy a drink without being annoyed by seagulls. Picture: Sam Ruttyn

Man’s best friend has a new role: banisher* of seagulls and protector of chips.

Muffin and Tauzer are part of a pooch patrol recruited to shoo marauding* seagulls away from diners at the Sydney Opera House.

A dog training company has been handed a two-year NSW government contract worth $376,380 after a successful trial to keep the feathered pests away from the popular spot on Sydney Harbour.

“They’d been having this problem ever since the Opera House was built and nothing has ever worked,” said Mad Dogs And Englishmen owner James Webb.

“They reached out to me in 2018 to see if this was something the dogs could do.” One of the patrol dogs scares away seagulls at the Sydney Opera House. Picture: Rohan Kelly

It was a unique request for the longtime dog trainer but the experiment paid off, with the pooches now proven to deter* the birds.

“We started out training the dogs how we thought best and it’s turned into a bit of a fine art over the years,” Mr Webb said.

“We give them a command and they run, jump up on the wall and bark at the seagulls and the seagulls fly away.” The work is now rotated between 13 dogs, a mix of kelpies and border collies, including two of Mr Webb’s own pooches.

It’s busy work and socially demanding, with the canines becoming an attraction all of their own.

“It’s a thing now, people want to see the Opera House dogs, pet them and take photos,” he said.

“So they have to be really good around people. That’s a key part of the assessment that we do.” 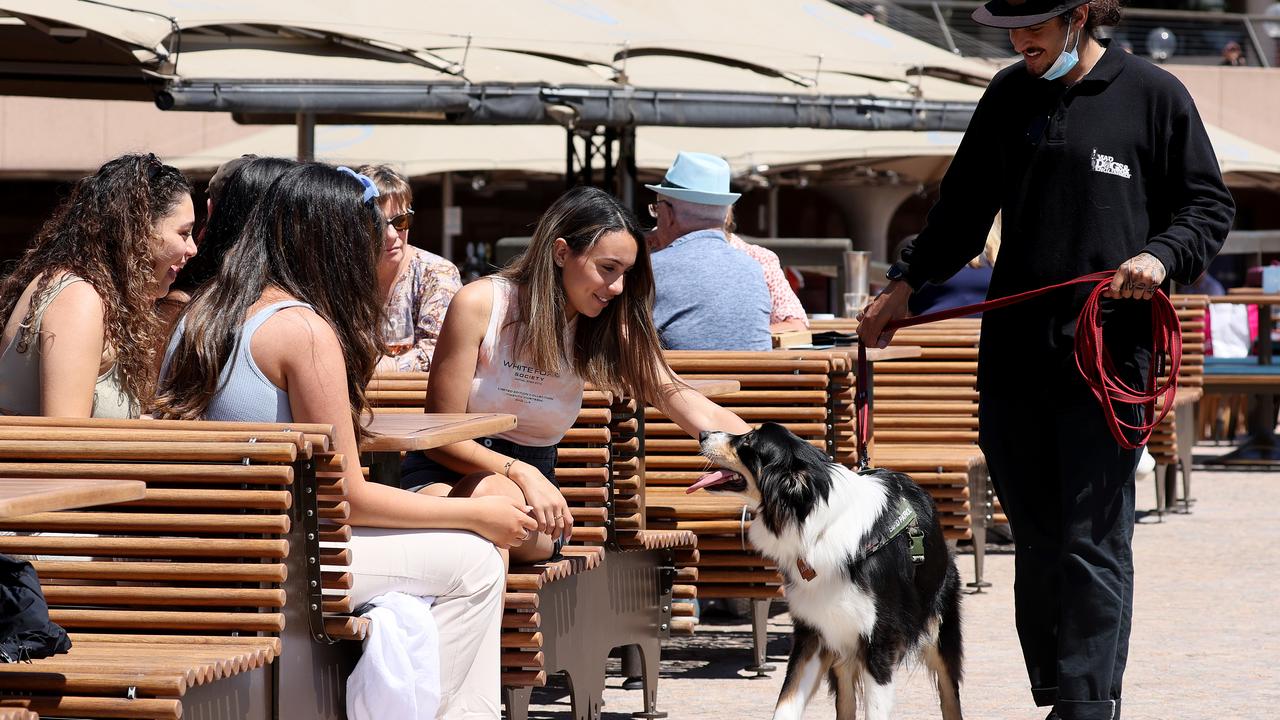 The seagull patrol dogs have become an attraction and enjoy pats from visitors to the Opera House precinct. Picture: Toby Zerna

The trial to deter the seagulls included other less-successful measures, including mechanical hawks and food covers.

A Sydney Opera House spokeswoman said the dogs had been “a resounding* success”, with the seagulls – a protected species – finally learning to keep their distance.

“The results have been incredibly positive, with the seagulls keeping their distance when the dogs are present,” the spokeswoman said.

“This has significantly reduced the number of meal replacements and improved the experience and safety of our patrons*.”

The seagull patrol is on duty daily, with each dog working as long as four hours at a time.

The cost is split evenly between the government funded Opera House and a bar and restaurant in the precinct*.

CLASSROOM ACTIVITIES
1. Design a logo
Design a logo for the pooch patrol at the Opera House. Your logo should highlight the importance of the dogs and the job they do.

2. Extension
What do you think happened when they used mechanical hawks to try to stop the seagulls? Imagine that you are a reporter for Kids News and you saw what happened. Write the Kids News story.

VCOP ACTIVITY
I Spy Nouns
Nouns are places, names (of people and objects) and time (months or days of the week).