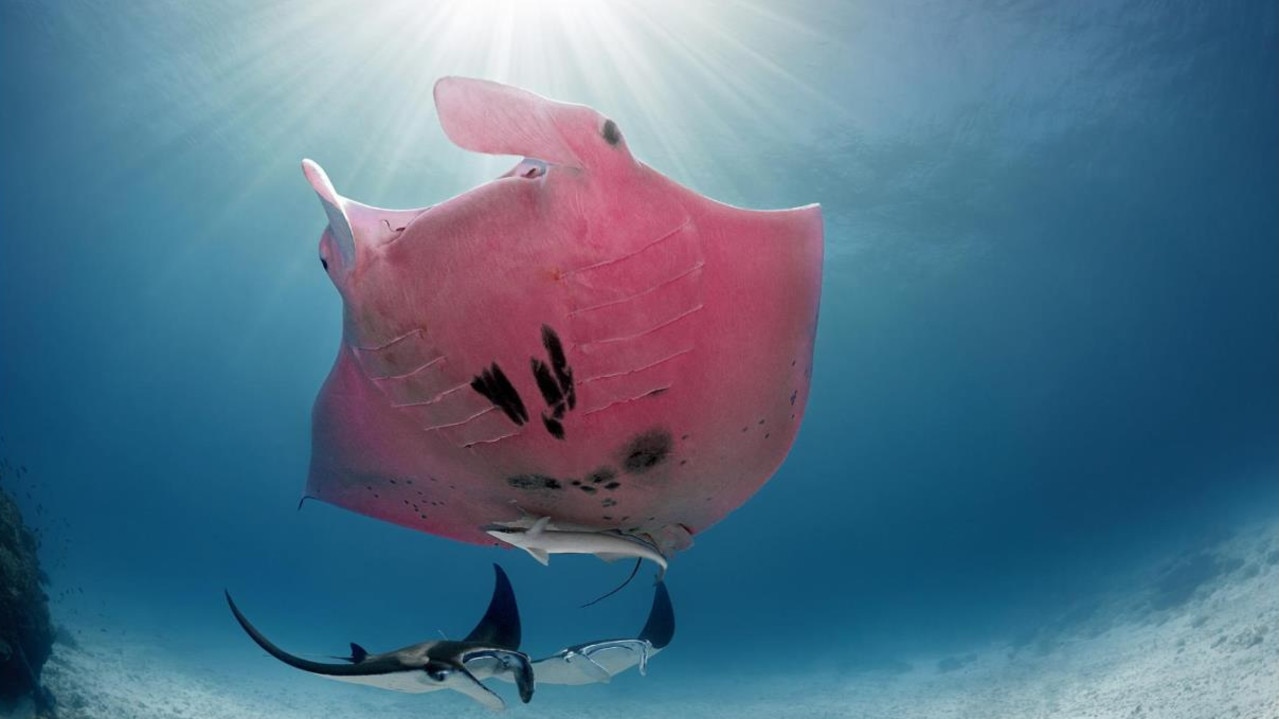 An ultra-rare pink manta ray — maybe the only one in the world — has been photographed during a dive on the Great Barrier Reef.

Scientists don’t know why the manta is pink, but have ruled out an odd diet or illness.

The ray, which measures 3.3m across, is nicknamed Inspector Clouseau after the famous fictional detective character from the Pink Panther films.

“I had never even heard of a pink manta,” said Mr Laine, speaking to ScienceAlert.

“And when I first saw it, I thought my camera was playing up.

“Only later that night I saw a photo of a pink manta on the restaurant’s notice board and thought it was a joke.

“Until I rushed to check the belly patterns in my camera.” This isn’t the first time the pink ray has been spotted.

It was first seen five years ago and was photographed in 2015 by diver Ryan Jeffery.

The pink manta has only been seen around 10 times, according to National Geographic.

But scientists are still trying to investigate the strange creature and understand more about its origins.

Scientists collected a small biopsy — a sample of living tissue such as skin — from the manta in 2016 to try to explain the bright pink colour.

“There has not been a thorough investigation into diet or stable isotope analysis,” said Asia Armstrong, of Project Manta, which has been studying Inspector Clouseau.

Testing called stable isotope analysis shows what is present in a sample, such as minerals*, hormones* or other substances that could cause the colour.

“But given the stability* of the white “birthmark” and pink colour over time we think diet can be ruled out.

“The working theory is that it is just a different and very unique expression of the melanin*, but that is still to be confirmed.”

This story was first published on The Sun and was republished with permission. Lorandy, a 3m manta ray at Cook Island, off the Tweed Coast, NSW. Andy Wingate and Loren Mariani found the majestic creature while diving and got to name it as part of UQ’s Project Manta. Picture: Andy Wingate MANTA RAYS
Manta rays are the world’s largest rays and are considered vulnerable.

They are filter feeders, gathering zooplankton* through their open mouths when they swim.

Gestation — pregnancy — lasts for one year and they give birth to live pups.

They are usually all black or all white, or black and white. Most common is a black back and white belly, thought to make it difficult for predators to see from above (looking down into the water) and difficult to see from below (looking up into the Sun).

Project Manta is a long-running research project based at the University of Queensland that aims to further our understanding of manta rays.

The project’s scientists welcome photos of manta rays from citizen scientists. Each manta ray has unique patterns on its underside and photos help the scientists learn about movement and behaviour.

CLASSROOM ACTIVITIES
1. Profile
Create a one-page profile of the pink manta ray from this news article. Include all of the essential data about it as well as a sketch that shows the unique markings on its belly.

2. Extension
Visit the Project Manta website noted at the end of the article and answer the following questions about being a citizen scientist for the project:

(a) In which locations are you likely to find manta rays in Australia?

(b) How should humans behave when observing manta rays?

(c) In order for photographs to be useful for the project, what area of the manta rays should citizen scientists be trying to capture in photographs?

(d) What type of information can be gained from the photographs submitted by citizen scientists?

VCOP ACTIVITY
Poem of the Senses – Manta Ray
A manta ray is a huge, beautiful creature, but a pink one. Well, that’s just amazing. Imagine you are Mr Laine, diving in the ocean and seeing this glorious sight.

Use as many senses (sight, sound, touch, taste, smell) as you can to write a poem describing the owe and beauty of such a sight.

HAVE YOUR SAY: What would you like to see on the Great Barrier Reef?
No one-word answers. Use full sentences to explain your thinking. No comments will be published until approved by editors.