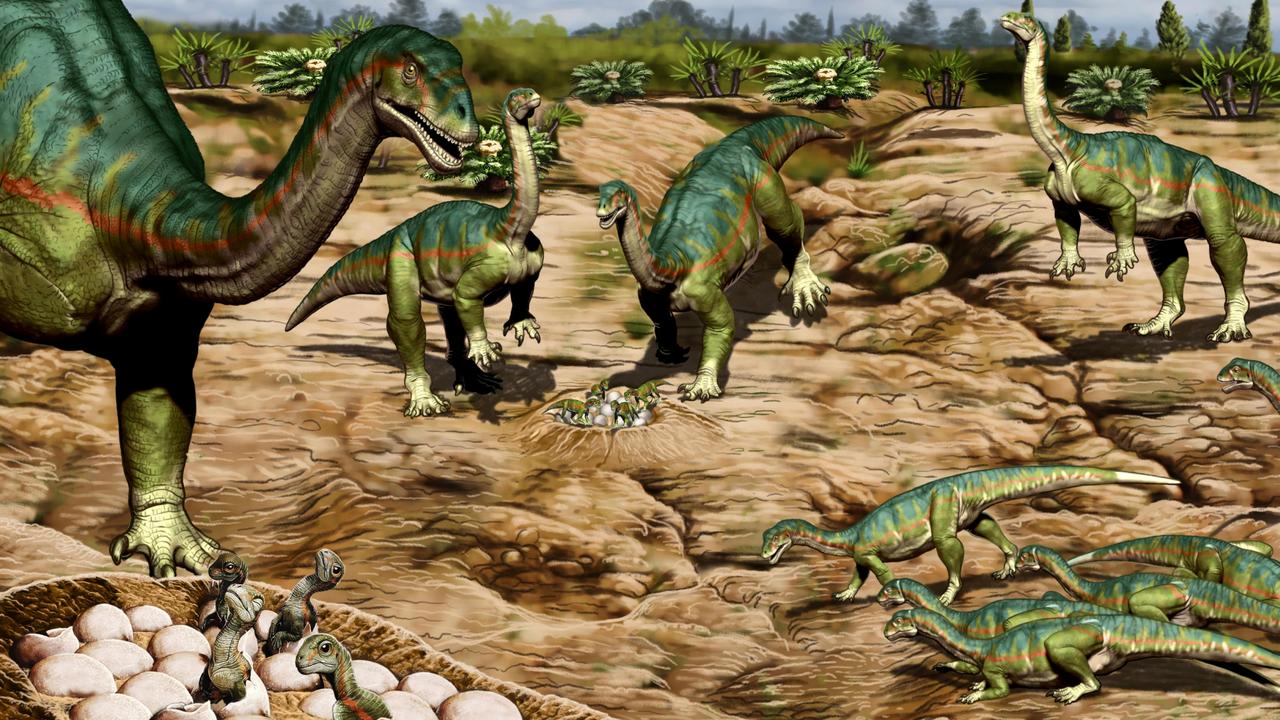 An illustration of what the fossil site might have looked like 193 million years ago when plant-eating dinosaur Mussaurus patagonicus lived in herds on the edge of an ancient lake in Patagonia. Picture: Reuters

An extraordinary fossil site in ­the South American region of Patagonia has provided the earliest evidence of dinosaurs living in herds.

The find includes more than 100 eggs and scores of skeletons, ranging from embryos that could fit in the palm of your hand to full-grown adults larger than cars.

All are the same species, Mussaurus patagonicus, a herbivore* that lived about 193 million years ago on the fringes of an ­ancient lake.

The find predates what had previously been the earliest evidence of ­dinosaurs living in herds by at least 40 million years. The fossil site in Patagonia included more than 100 eggs, including these. Picture: AFP/MEF-CONICET/Diego Pol

Mussaurus belonged to the sauropodomorph group of dinosaurs, the most successful plant eaters for 40 million years. The largest included the diplodocus, which weighed 16 tonnes.

Size has often been thought of as their main advantage. An ability to grow at a stupendous* pace and then to browse* the very highest branches of the forest canopy must have given them a leg-up* in evolutionary* terms.

But the discovery of the mussaurus nesting site suggests another factor also helped them to thrive – they liked each other’s company.

In a study published in Scientific Reports, researchers speculated* that the evolution* of complex* social behaviour* among sauropodomorphs was linked to them becoming dramatically larger about 200 million years ago.

Meeting the increased energy requirements of bigger bodies might have required them to work together to forage* over larger distances, the researchers suggested.

Large nesting colonies would also have provided safety in numbers. A scan of one of the dinosaur eggs discovered in Patagonia shows the remains of one of the Mussaurus patagonicus babies. Picture: AFP/ESRF/Vincent Fernandez

The fossils indicate that within a mussaurus herd, individuals gathered according to their ages. There is a cluster of 11 juveniles* aged less than one year. Two adults were also found together and there was also a group of nine individuals that were older than juveniles but younger than adults – dinosaur tweens, if you like.

University of Edinburgh palaeontologist Steve Brusatte, who was not involved in the study, said: “This is a stunning new fossil site. To have more than 100 eggs and 80 skeletons of the same dinosaur preserved in the same place is astounding.

“This is convincing evidence these plant-eating dinosaurs were social*, formed groups, and probably took at least some care of their eggs and young.

“Because these are Early Jurassic … it is the oldest record of dinosaur social lives. It seems dinosaurs were highly social animals from the very beginning, which may have factored into their stupendous evolutionary success.”

The fossils were found in several layers, indicating mussaurus returned to the same spot during successive seasons. The nesting ground appears to have been on the dry margins of a lake. Most of the eggs were found in clutches of ­between eight and 30.

This story was originally published in The Times, London.

CLASSROOM ACTIVITIES
1. Make a List
List all of the evidence, or the reasons why the scientists believe that these dinosaurs lived as a herd.

2. Extension
Can you think of anything else that the evidence might tell us about the dinosaurs? Give reasons, using the evidence, for your ideas.

VCOP ACTIVITY
My Pet Dinosaur
Imagine if you found one of those fossil eggs, how egg-citing (get it ha ha).

Now imagine that after touching the egg, you brought it back to life!

Congratulations you’re going to be a parent.

Time to get prepared for when this little hatchling arrives.

Write a series of journal entries that includes finding the egg, realising there was something alive inside, the egg hatching and the first few days of having your pet dinosaur.

Remember to hook us in right at the beginning – maybe try telling us a fact from the article that links to your finding, or a rhetorical question to engage with us.

Then continue to use your VCOP skills to keep us engaged and entertained throughout the writing.

Don’t forget to edit and uplevel before you share it.