A thieving parrot has provided a breathtaking, bird’s-eye view of a scenic New Zealand landscape – after swiping a GoPro camera from a group of hikers.

The Verheul family’s camera was stolen by a kea, a large native alpine parrot species known for its intelligence and curiosity – and for swiping food, wallets and valuables from unsuspecting tourists.

The family told local TV news program Seven Sharp that they were hiking the Kepler Track in remote Fiordland on New Zealand’s South Island and were staying at a hut when they were joined by some kea on the balcony. 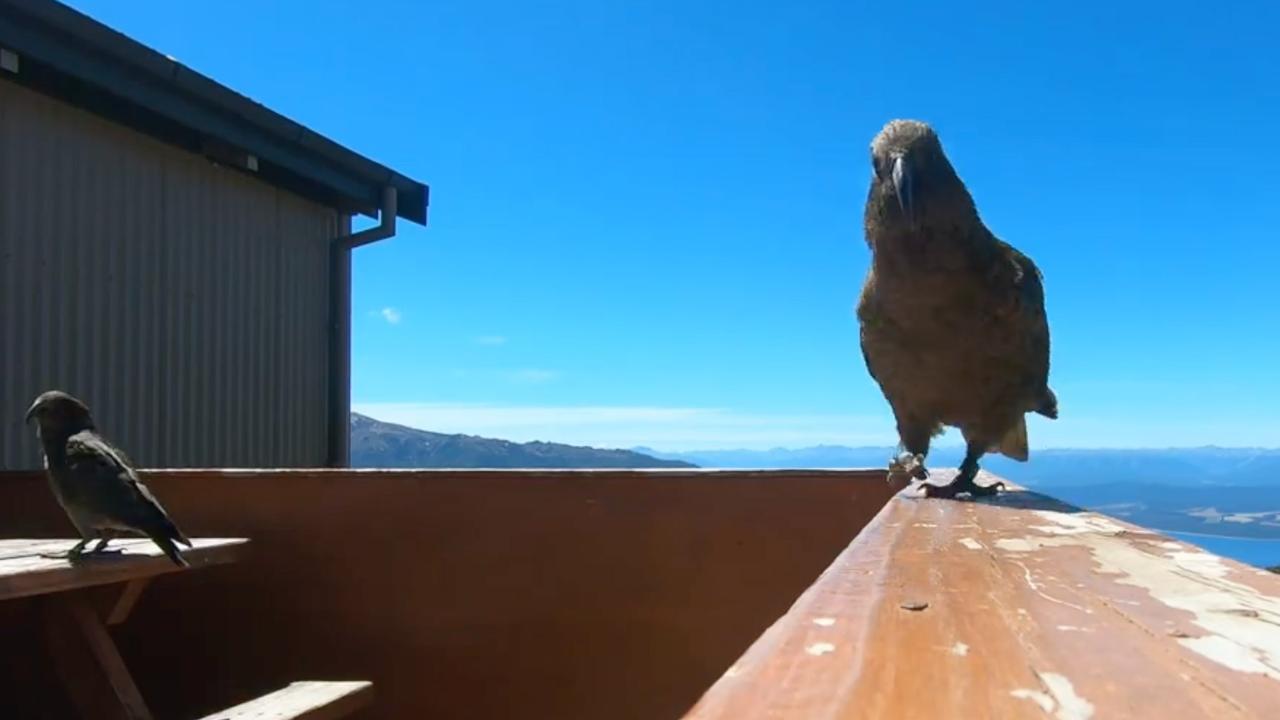 The Verheul family thought they’d get some footage of the kea on the balcony before one cheeky bird made off with the GoPro. Picture Alexandra Verheul

“It was a beautiful day and we were just sitting around watching the birds,” mum Alex Verheul said.

“My son decided to go put the GoPro on the handrail and a bird promptly stole it.”

The feathered kleptomaniac* swooped down the hillside, capturing a stunning backward view of the area.

The mischievous* thief finally landed on rocks and attacked the camera, pecking plastic pieces from the camera case. But the camera inside and the 2 minutes of spectacular aerial* footage survived. Ms Verheul said the family thought the camera would be lost forever but followed the sound of the birds to the rocks, where 13-year-old son Luca found the device.

“We just followed the sound down there, we could see them hanging out in a tree — they’d obviously heard us coming and abandoned the GoPro,” Ms Verheul said.

“My son decided to go check the rocks where it looked like a good place for a bird to land, and there it was still sitting there, still filming.” The camera was still recording when Luca Verheul, 13, found it in rocks. Picture: Alexandra Verheul

Ms Verheul said she was “really shocked, really surprised” when she got back to the hut and downloaded the footage to her phone and watched it.

“It was amazing. It was totally unexpected,” she said.

It was the first time the family, from the New Zealand city of Dunedin, had taken on the Kepler Track, with the encounter* with the kleptomaniac kea happening at the end of the first day of their four-day hike.

Modern-day message in a bottle

CLASSROOM ACTIVITIES
1. Bird’s-eye view
Create a design for a Bird GoPro, or a special camera that could be worn by birds. The purpose of the camera is to create even more amazing videos footage of places around the world.

2. Extension
Imagine that you are the kea. Write your side of the story starting with this sentence: “I was only trying to help.”