Taronga Zoo keeper Liz McConnell is hand-raising Weja, the 75-day-old echidna puggle that was found orphaned in the far western NSW town of Weja. Ms McConnell and her team will raise the puggle to be released back into the wild when it gets to around 10 months old. Picture: Toby Zerna

A pint-sized puggle* has found itself in the care of Taronga Zoo’s wildlife hospital after it was found abandoned in central NSW.

The 75-day-old short-beaked echidna puggle was found earlier this month at a farming property in Weja – a region six hours due west of Sydney – and is now thriving under the care of staff at Sydney’s Taronga Wildlife Hospital.

Taronga Veterinary* Nurse Liz McConnell became the puggle’s surrogate* mother and took the young echidna home each night in a makeshift* burrow made from a climate-controlled food carrier. The adorable 75-day-old orphaned echidna puggle has been named after the far western NSW town of Weja near where it was found. Picture: Toby Zerna

The carrier is equipped with a thermometer and filled with dirt, leaf litter and soft towels.

“A puggle of this age would normally be in a burrow where it is relatively cool, probably no more than 23 degrees,” Ms McConnell said.

“After a full check-up, the hospital determined the puggle was relatively healthy with just a few scabs on its tail and was estimated to be around 70 days old.”

The puggle – who is still much too young to have its gender* confirmed – will remain under the care of McConnell and the Taronga Wildlife Hospital until it is strong enough to return home at about 10 months old. Carers have named the puggle Weja, after the far western NSW  region where it was found.

Although they are not critically endangered*, short-beaked echidna populations are severely impacted by a range of factors including cars, introduced species and disturbances. Weja will be released back into the wild when it gets to around 10 months old. Picture: Toby Zerna

Mother love
Female echidnas build complex burrows during breeding time. With the puggle safely installed, the female backfills the entrance with leaves and sticks to ensure it is completely concealed, keeping her puggle safe from predators while she is away for up to a week foraging* for food.

Boost juice
Echidna milk is the richest milk in the animal kingdom. It’s so rich that the mother echidna only needs to feed the baby puggle about once a week. The pink colour comes from its very high iron* content. 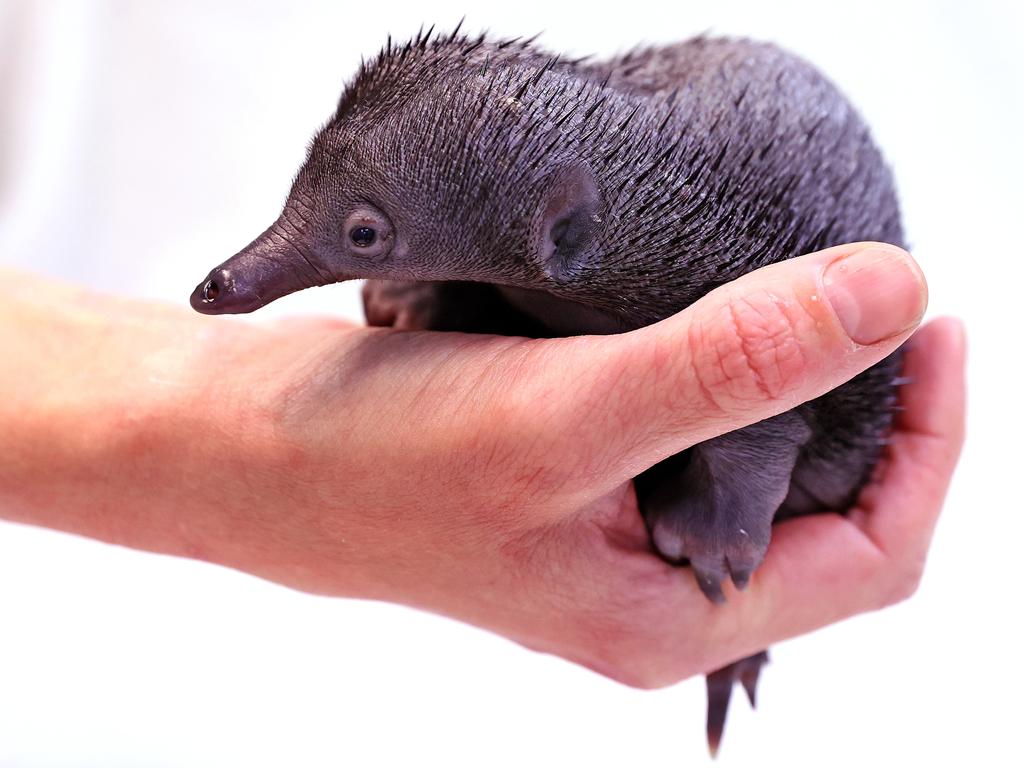 Taronga Zoo keeper Liz McConnell is hand-raising orphaned puggle Weja and ensuring it gets everything it needs to grow and thrive. Picture: Toby Zerna

The brains trust
Scientists are still investigating their intelligence, but echidnas can navigate* mazes and researchers have discovered that echidnas can also identify different symbols.

Girl power
Female echidnas put the boys through their paces before choosing a mate. Leading an “echidna train”, the female walks kilometres a day, with the males following in single file. Exactly what’s going on remains a scientific mystery, but she selects her partner at the end of the line. An echidna train can last days or weeks, so the lazy need not apply.

Waste not, want not
Echidnas farm certain colonies of termites by controlling how much they eat. They leave enough termites for the colony to survive, the termites rebuild, then the echidnas come back in another month or so for another feast. Genius.

All together now
As part of its echidna breeding program, Taronga works with a number of other zoos to understand more about this cryptic*, clever species. There are five subspecies and zoos are working to identify if any of these are currently at risk to help determine the focus of breeding programs.

Vote for the cutest baby animal

Team up with a classmate and quiz each other using the questions you have each written. Who will score highest?

2. Extension
Work with your partner from the above activity to create an echidna themed board game. Incorporate the trivia questions you have already written.