Orang-utans get helicopter ride back to the wild A helicopter dropping off a transport cage containing an orang-utan to be released into the Bukit Batikap Protection Forest in Gunung Mas, Central Kalimantan, Indonesia on February 16. Picture: AFP/BOSF

Ten orang-utans have been released back into the wild in the Indonesian part of Borneo island, with helicopters used to ferry the critically endangered great apes deep into the forest from rehabilitation centres.

The Bornean orang-utans that had all been in captivity* before their rescue included Nenuah, a 19-year-old female who was repatriated* from Thailand, according to the Borneo Orangutan Survival Foundation (BOSF).

In total, five males, a mother with two babies, and two other females were released with assistance from Indonesian conservation agencies.

“Using a helicopter is the best way to transport orang-utans during the pandemic,” said Denny Kurniawan, BOSF program manager, noting it would have taken three days of driving to reach one drop-off area, adding to the risk of COVID-19 transmission*. Conservationists handling a transport cage containing an orang-utan, which was flown to location via helicopter, ahead of its release into the Bukit Batikap Protection Forest in Gunung Mas, Central Kalimantan, Indonesia. Picture: AFP/BOSF 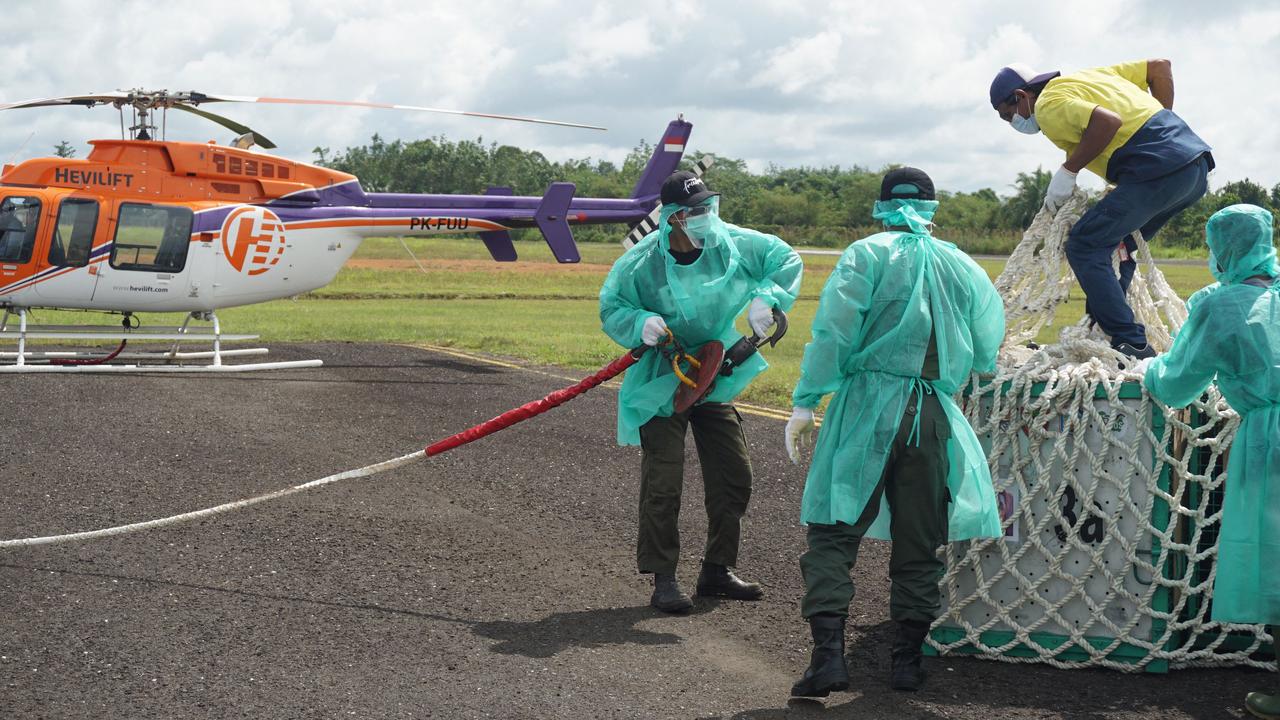 The orang-utans were transported in cages carried by helicopter to avoid a long and difficult journey by road and the risk of contracting coronavirus. Picture: AFP/BOSF Orang-utans and other apes are known to be susceptible* to human respiratory* illnesses, so vets wore protective suits and masks during final medical check-ups.

Orang-utans get helicopter ride back to the wild

Rehabilitation has been a slow process for other orang-utans that arrived at one centre with Nenuah in 2006, the foundation said in a statement, adding that most of the apes have found it difficult to develop the skills needed to fend for themselves in the wild, due to lengthy periods spent in captivity.

There are only estimated to be around 100,000 Bornean orang-utans left in the wild, according to the World Wildlife Fund, more than half the population being depleted* over the past 60 years.

They have suffered from illegal poaching*, as well as destruction of habitat due to large-scale logging and replacement of forests with crops such as palm oil. Orang-utans at the largest and arguably most successful great ape conservation program in the world, Borneo Orangutan Survival Foundation (BOSF). Its “rehab and release” program has forged a major breakthrough in the fight to save the endangered orang-utans of Borneo. Picture: supplied

Indonesia to relocate capital from Jakarta

Virtual safaris in to the wild from home

CLASSROOM ACTIVITIES
1. Write a Story
Write a story about the helicopter ride. You must write the story from Nenuah’s point of view. Nenuah is one of the orang-utans in today’s story.

2. Extension
Although we know the orang-utans were transported in a special capsule, imagine if they could travel in the helicopter and enjoy the view!

Design a special seat for the orang-utans to use in a helicopter. The seat needs to keep the animals safe and in their seats. You should also include features that help to protect them from any human respiratory illnesses.

HAVE YOUR SAY: What critically endangered animal would you like to help save?
No one-word answers. Use full sentences to explain your thinking. No comments will be published until approved by editors.